Masterful Prestige a Trick Worth Celebrating

A man holding a rubber ball stands before a crowded audience. He bounces it purposefully, almost smug in his certainty he is about to show you something which will astonish you. He pauses in front of a door, an entryway seemingly to nowhere, looking back across the stage towards its twin. “Are you watching closely?” he asks coyly. With a smile and a flash of movement he disappears behind the façade hurling the ball down the stage as he does so, almost instantaneously reemerging through the other door in order to catch it with a chuckle before the rubber sphere goes bouncing off the stage.

It is a trick, but just what kind of trick your guess is as good as mine. But that’s the world in which magicians like Alfred Borden (Christian Bale) and Robert Angier (Hugh Jackman) live. Theirs is a realm of sleight of hand and illusionary misdirection, a path to greatness embarked upon by a select few and where true glory comes to only the most singularly talented of their chosen profession. It is a competition where one fantastic trick deserves to be topped by another, a journey of one-upmanship swathed in honor and secrecy where the only thing worse than stealing a trick is revealing its workings to a questioning public.

This is The Prestige, writer/director Christopher Nolan’s eagerly anticipated follow up to Batman Begins based on the acclaimed novel by Christopher Priest. Working from a screenplay co-written by his brother Jonathan Nolan that is even more layered and complex than the duo’s Memento, this movie is a giant puzzle that takes intense concentration and absolute attention to detail to piece together. It is a remarkably well-acted masterwork, bristling with suspense and intrigue that rewards intelligent viewers with sights, sounds, twists and turns they’ll be talking about long after the curtain closes.

But how close it stays to their bosom will probably depend on how willing they are to forgive how cold and heartless much of this tale can be. This is a frigid motion picture, nearly as icy as one of the central mountain top locales one of the characters ends up visiting. These two men at the center of this maelstrom are calculating obsessives, former friends now driven to near-frantic dementia by the competitive rivalry that comes to define their lives. These are not good/bad or black/white sort of guys. Instead, these two men straddle a labyrinthine grey area where truth or lie depends entirely on a viewer’s constantly wavering point-of-view.

Angier’s fury towards Borden is at least understandable. The latter’s mistake may have been the reason the former’s wife Julia (Piper Perabo) lost her life. It’s an open secret why Angier loathes his competitor, and yet his fixation on unraveling the man’s greatest trick still borders on insanity. Sending his beautiful assistant Olivia (Scarlett Johansson), a woman who has grown to love him passionately, to work for Borden in order to steal his secrets, dismissing his longtime friend and “ingeneur” (an inventor of magic tricks) Cutter (Michael Caine) in a drunken rage, traveling all the way from London to Colorado Springs to visit an electrical scientist many label a madman; there is apparently no limit to what Angier will do to unseat Borden as the best magician of his generation.

Borden is his own eccentric enigma. One moment he is driven to despair over what happened to Julia. The next he’s callously manipulating all those around him to create a brilliant new illusion. He can be selflessly romantic with his new wife Sarah (Rebecca Hall) for an entire day, while on the following morning he is so consumed with making Angier look like a fool it is almost as if he hates the woman for being a distraction. He is his own cryptogram, an egomaniac who is both compassionate and contemptuous at the exact same time. Most of all he is a man of extreme pride, so sure of his own brilliance his inability to allow another a moment of intimacy or triumph could easily lead to his undoing.

Both actors are spectacular. One moment I adored Jackman, hungered for him to be the hero and lustily cheered on his quest to unseat Borden. The next I hated and despised him with all the passion of an angry mob out for the head of Frankenstein’s Monster. At the same time Bale made me hunger for his blood, his indifference to the death of Julia or the welfare of his wife so unforgivable I almost wanted to see him hanged. Seconds later, his compassion for Sarah almost overwhelmed me, while his overpowering love for his beautiful young daughter even at his darkest hour was enough to make me sob oceans of all-encompassing tears.

This does not make things easy for an audience. Not only do viewers have to deal with an almost indecipherable plot (although, as long as people are observant they shouldn’t have that much difficulty keeping track of what is going on), they also have to contend with two main characters who are frequently unlikable. My emotions were torn between both men, rooting for one and hating the other only to have the rug pulled out from underneath me and discovering I should have been pulling for the other man the entire time.

For me this picture is a richer, more satisfying cinematic meal than almost any other I’ve been served this year. Cutter calls “The Prestige” the most important aspect of a magic trick, the final moment where one sees the twists and turns, and where you see something shocking that you’ve never seen before. Which is also this movie in a nutshell. In a year of so many retreads and also-rans, where much of what’s hit the multiplex looks exactly like what was there just a month ago, The Prestige offers entertainment and wonderment unlike anything else currently in theatres, and that might be Nolan’s greatest magic trick of them all. 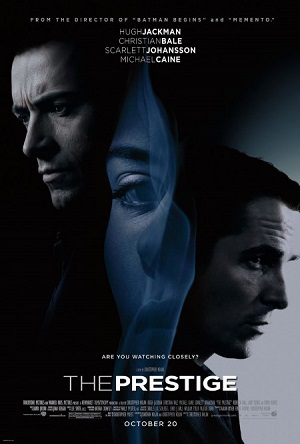