Eric Demeusy comes from a background as a visual effects technician working on films like TRON: Legacy and Pacific Rim. He also won an Emmy for helping create the first season main titles for Netflix’s “Stranger Things.” After helming a handful of shorts the filmmaker is now making his feature-length debut, Demeusy the writer, director, producer and co-editor of the ambitious, independently produced science fiction drama Proximity.

Unsurprisingly, Demeusy showcases a keen visual eye, his attention to detail close to sublime. Sadly, and also not much of a shock, the director spends far too much time composing any number of pretty pictures with his effects team and cinematographer Jason Mitcheltree than he does crafting a cohesive and consistently interesting story. His characters are undeveloped and the scenario often feels more like the fever-dream of an excited 13-year-old kid who has no idea how to edit his ideas into a coherent or cohesive whole. Proximity is a frustrating mess, watching it a grueling exercise in noxious tedium that drove me increasingly nuts.

Pasadena NASA researcher Isaac (Ryan Masson) has had a close encounter. While out on a weekend jaunt into the California countryside to record a video journal for his therapist, the young scientist is a firsthand witness to what initially appears to be a meteor crashing into the side of a hill. Next thing Isaac knows he’s been abducted by aliens, three whole days disappearing from his memory before he’s deposited back on the same spot he was originally snatched from.

That’s the precursor to everything Demeusy has in store. Isaac recorded the extraterrestrial visitor he came face-to-face with, and with a need to have his story believed he uploads the footage to the internet where it quickly becomes a viral sensation. From there he seeks out other supposed victims of abduction, making friends with the initially wary Sara (Highdee Kuan) who decides to trust him with her story. After that, there’s also a clandestine government agency renditioning the duo to Costa Rica, a friendly American hacker (Christian Prentice), high-tech robots with state-of-the-art facial recognition software, a covert operative with an otherworldly secret (Shaw Jones), a journey to a secluded British Columbia cabin in the woods and a mystery meeting with a fabled fellow abductee (Don Scribner) who has been missing for three-plus decades.

It’s a lot, and Demeusy doesn’t juggle it all with a whole lot of precision. It all feels like some esoteric hodgepodge of ideas culled from a variety of different cinematic sources, most notably Close Encounters of the Third Kind, THX-1138, Communion, Fire in the Sky, TRON: Legacy and The Signal. But the filmmaker does throw in a few original notions, especially as to the theological whys fueling this alien civilization’s frequent visits to Earth, this bit of nonsense adding a borderline supernatural element that’s at least somewhat intriguing.

But none of it fits together. The entire story is an avalanche of exposition that tends to spend the majority of its time trying to explain what is going on in massive flurries of nonsensical dialogue that comes perilously close to being unintentionally laughable. Worse, thanks to Demeusy’s seeming insistence to sub out composer Jermaine Stegall’s rather terrific score with a flurry of pop songs (written and performed by Radio Wolf and Parallels) whenever and wherever possible, the film oddly transforms into a music video at often the most boneheaded moments.

I honestly feel bad not liking Proximity. Demeusy is talented, and while his debut isn’t all that fresh or original, the filmmaker’s presentation of the material is still notably impressive. But it’s all in service to characters and to a story that’s as undernourished as it is unsatisfying. His film is a visually striking disappointment, and as far as close encounters go this is one I’m not going to be ruminating on in any sort of detail anytime soon. 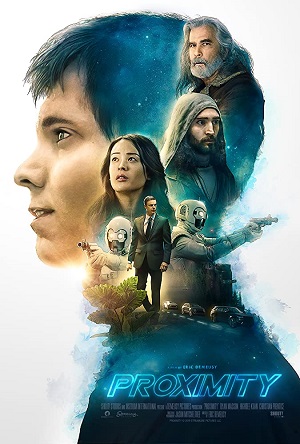