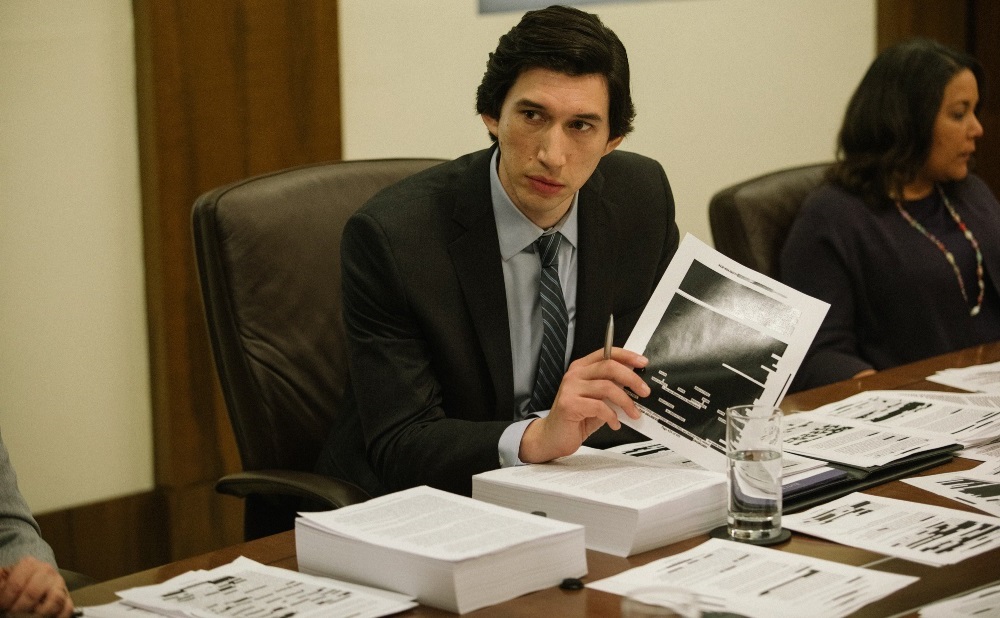 Under the direction of his boss California Senator Diane Feinstein (Annette Bening), Senate investigator Daniel Jones (Adam Driver) begins detailing a report on the Bush administration’s use of “Enhanced Interrogation Techniques” or EITs after the tragic events of 9/11. Holed up in a secure underground windowless room deep inside the Central Intelligence Agency, Jones and his team spend the next five years compiling roughly 6.700 pages highlighting countless instances of abuse of power, torture and even accidental death, none of which led to any actionable intelligence that could be used during the so-called “War on Terror.”

Facing pushback from Republicans on the Select Committee on Intelligence, officials at the CIA and even from the Obama administration, it becomes an open question if Jones’ finished report will see the light of day. Torn between duty to his country, confidence in his boss Senator Feinstein to not buckle to political pressure and an intense desire to make sure the truth public, the emotionally unflappable investigator flirts with the idea of leaking the document to the press. After spending so much time analyzing the ins and outs of so much violent abhorrence Jones is having serious doubts about the integrity of the political process, the questions he now has about his government ones that did not exist before he started his investigation.

Writer and director Scott Z. Burns’ (Side Effects, Contagion) docudrama The Report is a mostly apolitical procedural chronicling the creation of the 2014 Senate Select Committee on Intelligence’s Report on the Detention and Interrogation Program, a.k.a. “The Torture Report,” written by Daniel J. Jones and his assistants. It is an All the President’s Men-style analyzation of what it took to create this massive document and the psychological duress doing so triggered in its authors. The film is superbly made and magnificently acted by both Driver and Bening, the former so strong it’s a wonder why Burns ever allows the story or cinematographer Eigil Bryld’s (Ocean’s Eight) camera to look away from him for even a second.

That’s not quite as much hyperbole as it sounds. Driver commands the screen. He fidgets and squirms with determined intent, and over the five years he spends researching The Torture Report you can just see how spending so much time in the muck and mire of this unimaginable human carnage is ripping him apart. Yet Jones remains committedly resolute, and the actor makes certain to give this rigorous determination the significance it deserves. Driver’s scenes with Bening, no matter how brief they tend to be, are electrifying, the two working together with a shrewd conviviality that’s outstanding.

Some of the flashbacks depicting events discussed in the report can be a little heavy-handed. Burns doesn’t have to hammer down with all that much forcefulness to make his point, so coloring many of those responsible for making EITs a thing the American government tried to give legal authority to risible one-dimensional villains isn’t exactly necessary. If anything, making them out to be an assortment of fools, ideologues or greedy profiteers eager to exploit a horrific tragedy to line their own pocketbooks almost diminishes just how heinous this policy of torture on the military and the CIA’s parts proved to be. Still, many of the actors do a fine job, Maura Tierney, Michael C. Hall, Pun Bandhu, Jon Hamm and an unrecognizable Ted Levine particularly worthy of polite accolades.

Better are those portraying characters on the other side of the coin, ones who either knew before EITs began that torture wasn’t going to provide any useful intelligence or instead quickly discovered this was not a program they wanted to remain a part of. Fajer Kaisi makes a memorable impression as an FBI interrogator who, just as he’s on the verge of making inroads with a major terrorist, finds himself off the case so the CIA can try their new techniques, his anger at the stupidity of their actions viscerally palpable. Also great is veteran character actor Tim Blake Nelson as a medical professional initially charged with looking out for the health of those being interrogated, his aghast emotional dissolution as he watches what transpires during these EIT sessions brutally devastating.

For all of Burns’ attempts at misdirection and subterfuge, it isn’t like where The Report ends up is a secret. Diane Feinstein released a 525-page version of The Torture Report in 2014, the late Republican Senator from Arizona John McCain giving one of his most famous speeches in support of this action on the Senate floor. Even with the outcome part of the historical record, a level of unnerving suspense does pump through the motion picture’s veins for almost every tick of its almost two-hour running time. Burns has delivered a pulse-pounding procedural I could not resist, and I can’t help but think that audiences of all political persuasions will end up feeling the same just as long as they can put their differences aside in order to give the film a look. 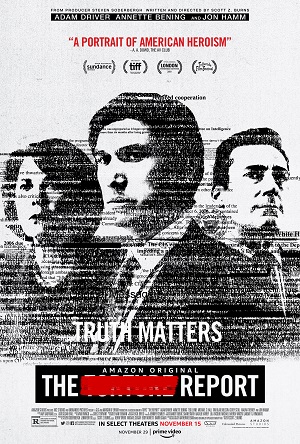