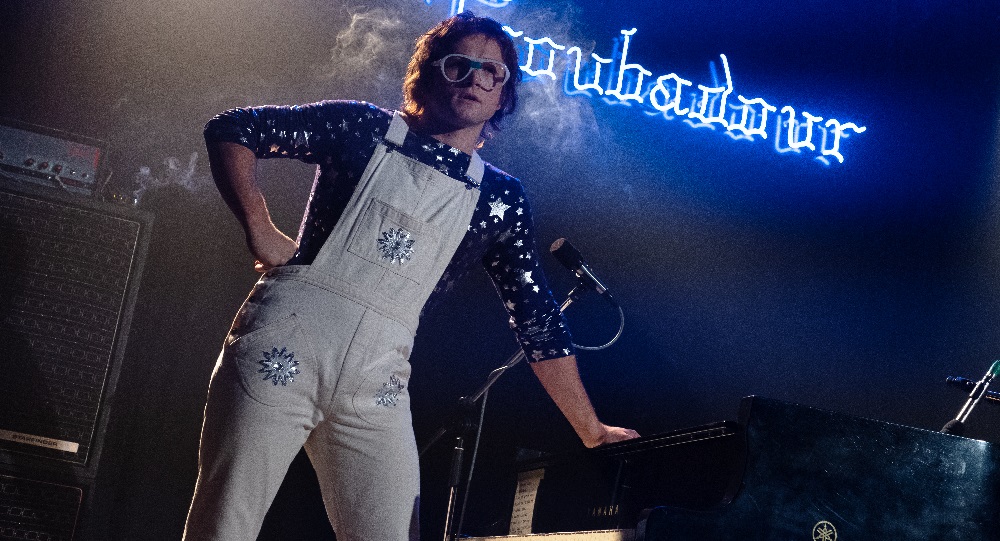 The Elton John biopic Rocketman can’t avoid all of the clichés of the genre. Heck, I’m not even sure it sidesteps any of them. Drug use? Check. Alcohol abuse? Check. Estranged relationship with parents? Check. Betrayed by a business manager? Check. On-stage breakdown during a major concert? Check. Diva behavior that strains relationships with those closest to him, including his best friend? Check. While all of these events and their like played a part in Elton John’s life, that doesn’t make them any less familiar from a biographical motion picture standpoint, the lack of a single narrative surprise incontestably conspicuous.

It doesn’t matter. Director Dexter Fletcher’s (Eddie the Eagle) energetically emotional musical is fantastically entertaining. It is an explosive trip through the life, times and music of one of the defining artists of the 20th century, this bouncy piece of pop euphoria a phantasmagoric treat I tapped my toe to throughout all of its briskly paced 121minutes. It is so gosh darn enjoyable it didn’t bug me that all of the characters outside of Elton John (Taron Egerton) and Bernie Taupin (Jamie Bell) were vaguely ill-defined and never allowed to be much more than relative caricatures. I also didn’t care that the framing device of the singer telling his story while in full glam-rock costuming at a rehab meeting was a little too flamboyantly on-the-nose. None of this bothered me because the movie was just too well made and too darn enjoyable to nitpick, Fletcher’s opus having an imaginative flair that’s superb.

Fletcher and screenwriter Lee Hall (War Horse, Billy Elliot) don’t waste a single second before they proudly pronounce just what kind of movie it is they are presenting for ticket buyers to consume. Within the first five minutes adult Elton John is having a duet with his adolescent self (Matthew Illesley) on the streets of his childhood neighborhood singing “The Bitch Is Back (Introduction)” while residents dance and prance about as if they’re performing on a Broadway stage, all the while the singer’s rehab group looks on in shocked awe. Fletcher is channeling All That Jazz and Absolute Beginners but with a Hairspray meets Mamma Mia! high-gloss glittery shimmer, the grit and angst of the tortured artist juxtaposed against a Technicolor milieu that’s been art directed and costumed within an inch of its rockabilly heart.

By focusing on things as they do the filmmakers manage to get inside Elton John’s head. I felt as if I were living within the singer’s fevered imagination, his descent into alcohol abuse and drug addiction uncomfortably personal with each swig of gin and snort of cocaine. I could also be energized by the artist’s creative euphoria. The moment where Taupin gives him the lyrics to “Our Song” and the music just begins to flow out of him organically as if it were a living organism, the lyricist, Elton’s selfish mother Sheila (a terrific Bryce Dallas Howard) and his quietly affectionate grandmother Ivy (Gemma Jones) all looking on in wide-eyed tearful awe, it’s one of those scenes I didn’t want to end. It’s priceless, so beautifully attuned to both the characters’ emotional states as well as the larger narrative picture that I was blown away by the gorgeously subtle simplicity of what was up there on the screen.

Fletcher manages to create sequences like this time and again. While I always knew where things were going and was seldom (if ever) shocked by what was transpiring, the director keeps things fresh and alive while also staying true to Elton John’s internal journey towards self-actualization and unembellished understanding as to who he is as a person and what he needs to do in order to find true happiness and contentment as a musician. Musical numbers spring to life as if out of thin air, gravity disappearing and water not proving to be any sort of hindrance as “Crocodile Rock” and the film’s titular tune spring to life as if they were composed right there on the spot.

At the center of it all is Egerton, and as good as the young actor was in Eddie the Eagle and Testament of Youth I was not at all prepared for just how glorious he was going to be here. Not only does he sing Elton John’s songs with passionate urgency, he also descends deep into the emotional abyss as he builds his three-dimensional performance with intricate specificity. Egerton broke my heart on a number of occasions only to piece it back together again with his goofy panache just a few minutes later. He is the engine that drives this musical towards its conclusion, and there was never a moment where I felt like I could have taken my eyes off of him even had I wanted to try.

Hall’s script isn’t timid where it deals with Elton John’s sexuality, his difficulties accepting who he is and trying to come out as a gay man one of the central battles he fights. But while his affair with manager John Reid (Richard Madden) ends as anticipated (i.e. badly), the screenplay manages to get there without suffering too many obnoxiously overfamiliar pitfalls. While Hall is hardly kind to Reid he still refuses to paint him as a one-dimensional bad guy. Madden latches onto the character with forceful gravitas in large part because of this, and where a lesser motion picture would reduce Reid to heinous and offensive stereotypes this one thankfully refuses to do so.

Could Rocketman have been even more aggressive in its approach? Would I have liked the film more had Fletcher ratcheted the innovative intensity up even higher? That’s certainly possible, and I can’t say that the by-the-numbers presentation of a few of the more expected beats (most of them involving Elton John’s drug addiction) don’t have a melodramatic air of inevitability that’s annoying. But Fletcher, Egerton, Bell and the rest of the cast and crew overcome every obstacle with stupendous effervescence, their musical biography a heartfelt song of euphoric victory I’m going to be singing along with for a long time to come. 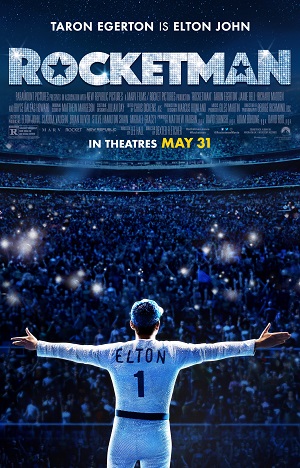