Led by the singularly focused Samantha O’Hara (Megan Fox), when a crack team of mercenaries attempts to rescue a kidnapped schoolgirl from a platoon of heavily-armed poachers and slave traders the last thing they prepared for was to end up trapped in a dilapidated plantation being hunted by a rogue lioness. But low on ammunition, their numbers dwindling and the clock ominously ticking until help arrives, that’s exactly what happens. Yet Samantha is determined to complete her mission no matter what, even if that means every member of her unit – including herself – have to lay down their lives in the process.

What more do I need to say? This is a movie about Megan Fox and a team of grizzled mercenaries (along with a couple of scared teenage schoolgirls) facing off against a small murderous army of human traffickers and one majorly ticked-off lioness over a long, bloodily gory night. That’s it. That’s the plot. There’s little more I need to add.

I’m led to believe that director and co-writer M.J. Bassett (Solomon Kane) had somewhat lofty ambitions to mix in some social commentary about poaching and conservationism amidst all the flying bullets and man-eating animal carnage, but I’d be lying if I didn’t say that lost on me fairly early on. It’s there, and I certainly get what she and her screenwriting partner Isabel Bassett were likely going for, but that facet of their scenario never makes much of a lasting impression, which is admittedly something of a pity.

But not one that weighs on me all that much. When taken as a low-budget action-horror programmer, Rogue is a lot of fun. Fox is a strong heroic presence, bringing a bit more emotional depth to her performance than I anticipated. She’s not content to just show up and pick up a quick paycheck appearing in a silly little throwaway thriller. Instead, Fox gives Samantha just enough complexity to make rooting for her to succeed in her protectionary task worthwhile.

It helps considerably that she has a killer supporting cast. Many of the actors portraying her gaggle of mercenaries fit their various character types nicely, most notably Philip Winchester (who previously worked with Bassett on the long-running Cinemax show “Strike Back”), Sisanda Henna and Kenneth Fok. Jessica Sutton and Calli Taylor are also solid as the two teens Samantha and her team are trying to protect, each believably conveying their struggles to overcome the paralyzing fear that’s attempting to envelop them both.

Some rather unconvincing CGI notwithstanding (the digital lioness looks like she came right out of video game), Bassett handles the action and attack sequences with confident precision. The director doesn’t overcut and allows for a naturalistic flow to the mayhem. She also does a terrific job of establishing the geography of the plantation, so by the point various characters go off in different directions to either hide or fend of attackers it’s still reasonably easy to know where everyone is and how close the others are to them in case assistance is required.

Rogue is hardly essential. It’s thinly plotted and I never really did figure out exactly what the villain’s endgame was or why he was so determined to sacrifice so many of his men to recapture one of the girls (she’s the governor’s daughter, but even that doesn’t truly explain why he finds he so darn valuable). But Bassett’s film is undeniably entertaining for those who find this type of premise appealing. More importantly, Fox makes for a strong action hero, and I could watch her bark orders and slice bad guy jugulars again with no problem whatsoever. 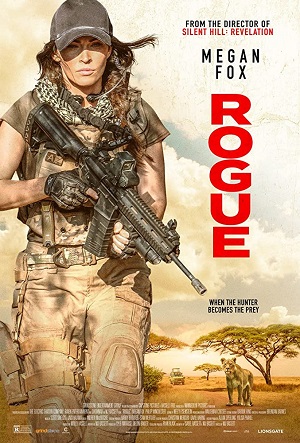