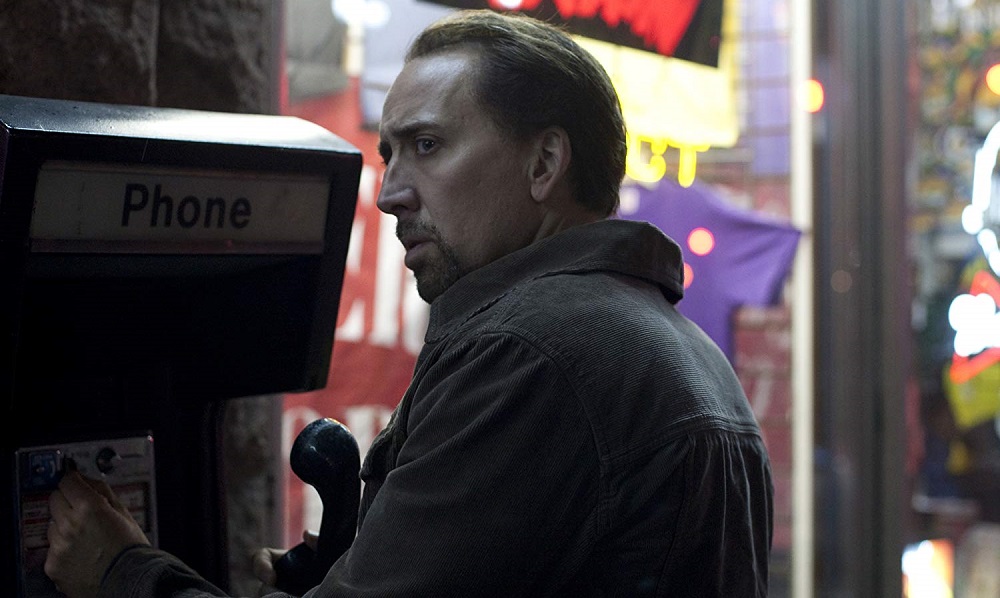 Will Gerard (Nicolas Cage) is a teacher working at a rundown New Orleans high school. His lovely wife Laura (January Jones) is a successful musician with a plumb gig playing for the local symphony orchestra. They appear to have the perfect life, but when she is brutally raped and left for dead everything from that moment forward changes. Will is enraged, his blood boiling to the point of explosion, and he has no idea how either he or his wife will ever be able to put the fragments of their life back together after facing first-hand such unimaginable evil.

Enter the soft-spoken Simon (Guy Pearce). He knows who raped Laura. More, he can have someone get to him. No money needs to change hands. No contracts need to be signed. He just represents a cadre of concerned citizens eager to bring their city back from the brink. The only caveat? If Simon takes care of this piece of human scum he might come back at a future date and demand a favor of Will, a favor he expects the school teacher will fulfill.

It’s no secret what happens next as far as Seeking Justice is concerned. Simon returns six months later asking Will to help him bump off a man he describes as a murderous pedophile who has done unspeakable things to the children of New Orleans. But nothing is as it appears, and suddenly the mild-mannered everyman is entangled in a Hitchcockian conspiracy that puts both his and his wife’s lives in jeopardy. He’s got to find out who Simon really is, what he is really up to and who it is that is working with him. Will is forced to become an amateur detective in order to bring real criminals to justice, all the while the police are hot on his tail believing he’s a vicious murderer.

Robert Tannen’s screenplay, working from a story he’d crafted with noted cinematographer Todd Hickey (After Sex), isn’t exactly original. It’s pretty easy to figure out what is going on and where things are headed. There aren’t any surprises, all of which makes the outcome too much of this tale a foregone conclusion no matter how respectfully handled and solidly acted the film itself might turn out to be.

And it is handsomely made, director Roger Donaldson (The Bank Job, Thirteen Days) an old hand at this sort of thing, bringing his best No Way Out energetic ingenuity to a scenario that’s not worthy of his efforts. He keeps the pace brisk and camouflages many of the script’s shortcomings, knowing when to play up the more absurd bits and also when to pull back and let the inherent emotion of the scenario speak for itself. Donaldson does a solid job, nearly pulling a rabbit out of a hat and making a diamond out of a dirty and dusty piece of coal.

He also gets the first movie performance out of Jones that I’ve ever found passable, the “Mad Men” actress almost making me forget her unfortunate turns in pictures as different as Unknown and X-Men: First Class. She’s just fine as Laura, and while not a ton is asked of the actress that doesn’t mean she still doesn’t manage to tap into the character’s feral insecurities as well as her love for Will both at the same. I kind of enjoyed watching her here, and considering just how negatively I’ve reacted to Jones in the past that’s a mighty big plus as far as I’m concerned.

As for Cage, after two years of drivel, after sleepwalking through The Sorcerer’s Apprentice, Trespass, Drive Angry, Season of the Witch and Ghost Rider: Spirit of Vengeance, the Oscar-winner actually has found a role he seems to care about. Sure, the movie isn’t Kick-Ass or Bad Lieutenant: Port of Call New Orleans, and yes is it nowhere near the glorious heights of Adaptation, Leaving Las Vegas or Face/Off, but there’s nothing stated in stone anywhere that it had to be. What matters is that he seems to care, Cage investing himself into a character completely for the first time in ages, and even if the script doesn’t deserve his efforts I still applaud him for doing solid work all the same.

If only the movie was even moderately worthwhile. It has a rudimentary made-for-Cable feel that, while certainly not off-putting, is still rather laughable. The actors deserve better. Donaldson deserves better. Cinematographer David Tattersall (Journey 2: The Mysterious Island), editor Jay Cassidy (Conviction) and composer J. Peter Robinson (Quinceañera) all deserve better. Most of all, the audience deserves better, and as competent and as well put together as the film might be the fact the script for Seeking Justice is an unbearably forgettable dirge is a complication too gigantic for any of their collective efforts to be able to overcome. 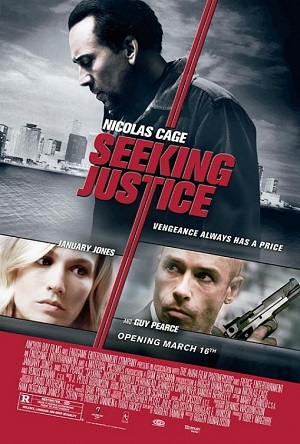