Exciting Shadow in the Cloud a Monstrously Silly Flight of Fancy

Flight Officer Maude Garrett (Chloë Grace Moretz) is on a top-secret mission carrying a mysterious package. Much to the consternation of the all-male B-17 Bomber crew of the aptly named “The Fool’s Errand,” she is to join them on their resupply mission. Ordered by the ship’s Captain Walter Quaid (Taylor John Smith) to ride out the trip in the Sperry, the electrically powered dorsal gun turret, everyone buckles in for what will hopefully be a quiet flight.

If only The Fool’s Errand was that lucky. Maude spies a Japanese fighter and quickly blows it to bits, but it’s still safe to say where there’s one enemy plane there’s likely going to be two or three more. But that’s the least of their problems. There’s something on one of the wings, and it’s not a bird. Even though the rest of the crew openly scoffs at the idea, Maude’s pretty sure it’s a gremlin, and if they don’t do something about the creature fast, not only will her mission be a failure, their B-17 will likely be plummeting out of the sky sooner rather than later.

At a brisk 83 minutes, Shadow in the Cloud is a fun little creature feature that’s one part a riff on a classic “Twilight Zone” scenario and another part straightforward WWII aerial thriller only with an unsubtle feminist twist. Writer/director Roseanne Liang, who reportedly altered Max Landis’ original screenplay significantly before shooting began, delivers a sturdy B-grade bullet-riddled trifle I found awfully easy to enjoy. It’s an efficient piece of escapist entertainment that gets better as it goes along, everything building to a satisfying finale that had me almost wanting to give the filmmaker an appreciative high-five as soon as the credits began to roll.

It helps that a game Moretz gives herself over to the production completely. She treats everything with total seriousness, never winking back at the audience even when events are at the most goofily absurd. The actress brings a level of sternly focused gravitas that’s similar to what Kurt Russell brought to many of his most memorable roles working with John Carpenter. As facelessly nondescript as the remainder of the ensemble is for the majority of the running time this is a good thing indeed, Moretz cutting loose in a fashion similar to her iconic turn as Hit-Girl in Kick-Ass roughly a decade ago.

Goofy is a great word to describe all of this nonsense. There are moments where Maude is forced to climb upside down across the undercarriage of the B-17 as if she were auditioning to be a part of the upcoming Uncharted video game adaptation, and it’s all as delightfully silly as it sounds. There are also multiple scenes featuring the fearsome gremlin that come perilously close to bordering on camp, and frequently I began to wonder just how seriously I was supposed to take everything that was going on.

Some of the dialogue is too on-the-nose for my taste. Although the uncouth sexism of the bomber’s crew is mostly period-appropriate, the modern idiomatic spin put on some of the back-and-forth verbal smackdowns between Maude and the men still doesn’t work very well. Instead of being empowering, hopefully showing the heroine standing up for herself with wit and intelligence, oftentimes these scenes come across as being more offensively juvenile than they do anything vaguely positive. It’s annoying, ugly and obnoxious, and while I get what Liang was trying to do I still felt that most of these early conversations rubbed me the wrong way.

Nonetheless, the filmmaker still manages to make the most of what had to be a rather limited budget, her crack technical team, which includes Academy Award-nominated editor Tom Eagles (Jojo Rabbit), production designer Gary Mackay (Crazy Rich Asians), costume designer Kristin Seth (Hunt for the Wilderpeople) and especially cinematographer Kit Fraser (Under the Shadow), doing exemplary work to bring all of this insanity to life. There’s also a rambunctious 1980s-style score courtesy composer Mahuia Bridgman-Cooper (Housebound), and while I can’t say it exactly fits the WWII time period, I still got a massive kick out of it all the same.

There’s not a lot more to add. Moretz is excellent, and Liang confidently orchestrates much of the nonstop action with energetic aplomb. For my first 2021 viewing experience, Shadow in the Cloud was a surprisingly enjoyable flight of monstrous fancy that helped me start the year off with a happy smile. Considering all we’ve endured during these last 12 months, I’m going to take this as a positive harbinger of the hopefully good things to come. 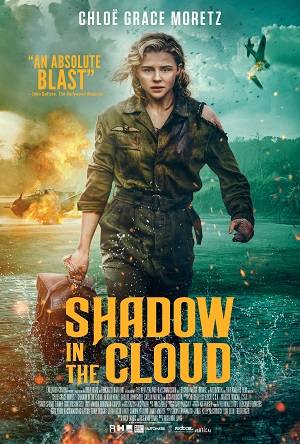