Latest Shaft a Disappointing Continuation of a Historic Franchise

There have been five films in the Shaft franchise. Three of them are titled Shaft, the original 1971 “Blaxploitation” actioner directed by Gordon Parks and staring the great Richard Roundtree as the titular Harlem private detective, a 2000 continuation of the series with Samuel L. Jackson as cynical New York City detective John Shaft II directed by the late John Singleton, and now this 2019 endeavor directed by Tim Story with both Jackson and Roundtree reprising their roles and Jesse T. Usher joining them as FBI data analyst John “J.J.” Shaft Jr. It is a historic series that has spanned 48 years and somehow retained its cultural relevance, and it’s easy to see why Warner Bros and New Line Cinema would be interested in seeing if they can keep it going with a younger star in Usher.

Not gonna lie. Watching Jackson and Roundtree interact? No matter how briefly? That’s pretty awesome. In the case of the latter actor, this has always been a character who has fit him like a glove (his two 1970s sequels, Shaft’s Big Score and the exuberantly nutty Shaft in Africa, might be even better than the original Oscar-winning film), and I love that Story and screenwriters Kenya Barris (Girls Trip) and Alex Barnow (“The Goldbergs”) give him so much substantive to do during the climactic portion of this tale. Roundtree and Jackson have a wonderfully unforced, muscularly effortless chemistry, and I couldn’t help but smile every time they mischievously traded verbal barbs.

Unfortunately, as far as positives go I can’t say I have a whole heck of a lot more of them to say about this fifth entry in the franchise. This feels more like a junior-grade, not particularly well thought out Harlem-set Beverly Hills Cop reboot than it does a gritty, hard-edged Shaft sequel. The emphasis on vulgar, retrograde humor involving masculinity and sexuality is oddly off-putting, and even with J.J. calling many of these instances out for being inappropriate, homophobic and/or regressive that doesn’t make them any more palatable. The film also doesn’t do anything that isn’t frustratingly insincere with its core female characters, talented actresses Regina Hall, Alexandra Shipp and Luna Lauren Velez all presented as portraying intelligent, competent women worthy of respect only to belittle or devalue their abilities or achievements whenever any of the Shaft men are flexing their masculinity.

I’ve never found Story to be a strong filmmaker where it comes to action. Both of his Fantastic Four adventures have a myriad of problems, and the fact that neither of them were especially exciting was chief amongst them. The same could easily be said for both Ride Along features, and even though those two Ice Cube-Kevin Hart action-comedies were successful at the box office that didn’t make the staging of their various shootouts and car chases any less lazy or unappealing. As for 2004’s Taxi, the less said about that Queen Latifah-Jimmy Fallon disaster the better, Story’s remake of the 1998 Luc Besson-penned French sensation coming perilously close to being unwatchable.

The action in this film isn’t terrible. It’s just flat, blandly staged and not very compelling. There is a static quality to the final battle between the three Shaft men a bevy of nondescript baddies that’s just not exciting, and other than a great, admittedly humorous singular moment for Roundtree there’s nothing thrilling about anything that happens. It’s a boring ending to a movie that, for all its faults, had plenty of energy up to that point. But Story doesn’t appear to be capable of investing any of that liveliness into this climactic sequence, and as such his sequel comes to an end with a ho-hum shrug of the shoulders instead of with a confident right hook to the viewer’s jaw.

The plot is basic detective-on-the-case 101. After his best friend dies of a mysterious drug overdose, J.J. is forced to go outside of the FBI and hire his estranged father to help him find out what happened. The pair are aided by the insight of the former’s childhood friend, now a doctor, Sasha (Shipp), the case leading them to a Harlem tenement building overseen by a notorious thug, a neighborhood mosque under FBI surveillance, a Puerto Rican grocery store and a nonprofit rehab center specializing in helping military vets kick their drug habit. J.J.’s mother and Shaft II’s ex-wife Maya (Hall) also ends up getting involved, the opinionated woman imploring her former husband to not let their son do anything that might get him killed.

It’s a little more involved than that, of course, Barris and Barnow’s script tying things back to a murderous drug lord who has had a thing against the Shaft family for almost three decades, but none of that is especially stimulating from an intellectual perspective. Worse, the movie doesn’t do anything to make any of the potential bad guys standout in a way that might matter, none of them given any room to make a fundamental impact upon the story. The threat is vague and ill-defined, and because of that I could have cared less if the Shafts were going to solve the case and bring any of those responsible for all the carnage and mayhem to justice.

I do like that this series has continued. I loved seeing Roundtree back in the role that made him a star. As easy as being in a movie like this is for Jackson he still has a cool, macho swagger that even with all the retrograde lunacy his character is continually spouting allows him to be a magnetic presence that’s difficult to take your eyes off of. But Usher’s J.J. doesn’t seem to belong in this universe, while the emphasis on risible, clunky and offensively stereotypical comedic beats feel like they would have fit far more comfortably in a 1980s Eddie Murphy vehicle than they do here. This latest effort to carry the Shaft name isn’t unwatchable but it equally isn’t worthy of a look, either, all of which makes shutting my mouth about its various missteps and shortcomings impossible to do. 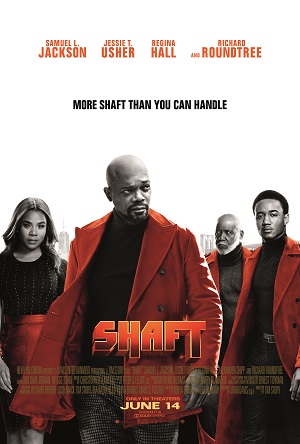