Delightfully Silly Skyfire a Volcanic Gem of a Disaster

On a Tianhuo Island in the Pacific Rim, right in the middle of the “Ring of Fire,” volcanologist XiaoMeng Li (Hannah Quinlivan) is putting the finishing touches on an early warning eruption system nicknamed “Zhuque.” She is being financed by entrepreneur Jack Harris (Jason Isaacs) and his devoted wife JiaHui-Dong (An Bai). They’ve built a massive resort on this island, and the Zhuque system is the key to ensure they’ll be able to offer up a vacation destination unlike any other in the world.

Do I need to say anything more as it concerns the plot of special effects-filled Chinese disaster epic Skyfire? In perfect When Time Ran Out… meets Dante’s Peak fashion, the volcano on Tianhuo has no intention of remaining dormant. The sky will be filled with ash. Pristine blue lakes will become boiling death traps. Lava will smother everything unlucky enough to be in its destructive path. Fiery rocks will rain down from the smoky heavens like molten balls of hail.

In other words, director Simon West, best known for the trifecta of Con Air, The General’s Daughter and Lara Croft: Tomb Raider, delivers exactly what is expected for a motion picture of this type. It’s a fast-paced disaster yarn overflowing in narrow escapes, sudden deaths and an overabundance of visual pyrotechnics. What transpires is frequently illogical and almost always irredeemably silly, all of it centered on a father-daughter melodrama that goes nowhere surprising and is expressly designed to fill the viewer’s eyes with tears and almost nothing else.

All of that is only part of what makes Skyfire such dopey fun. The ensemble is strong (most notably Quinlivan and Xueqi-Wang as XiaoMeng’s overprotective father – a fellow volcanologist – WenTao-Li), the effects above average and West exuberantly directs the heck out of it. It’s like the filmmaker is reinvigorated handling the duties on a Chinese language, Irwin Allen-style disaster opus, and while it’s a low bar this is arguably his best film since his debut, the aforementioned Con Air.

Isaacs is doing some sort of strange South African accent thing reportedly inspired by Elon Musk, but considering how goofy the movie is this bit of idiosyncratic strangeness fits right in. Heck, once you get passed that Jack Harris apparently never watched Jurassic Park (I mean, seriously, who builds a resort in the shadow of an active volcano and thinks that’s going to be a good idea?) he comes perilously close to being a multidimensional character. Harris doesn’t get there, of course, but that Isaacs gives it a fairly decent shot to try and make him one is moderately impressive in and of itself.

Skyfire is pretty much as advertised. A tropical resort in the middle of the Ring of Fire ends up being the site of a catastrophic volcanic eruption. Subsequently, all heck breaks loose and a small band of heroes attempt to save as many people as they can while trying to avoid becoming a lifeless part of the tragedy themselves. It’s all far more entertaining than it likely has any right to be, and I for one am positively delighted that ends up being the case. 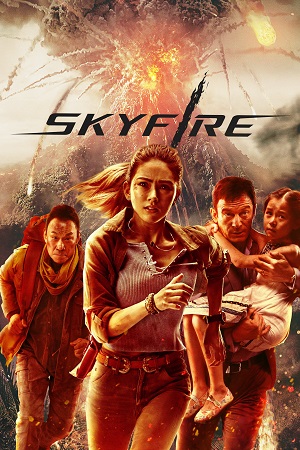