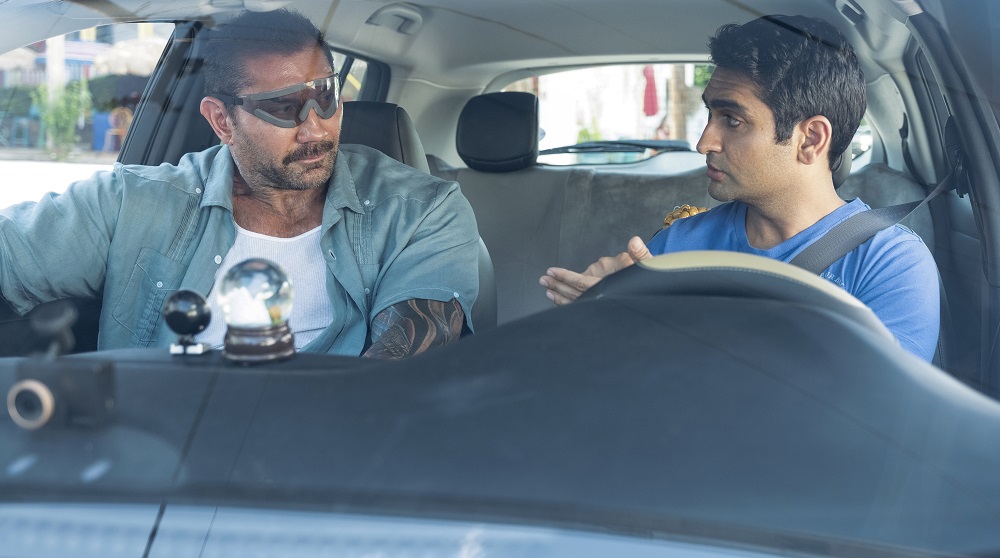 Stu (Kumail Nanjiani) is a mild-mannered clerk at a Los Angeles sporting goods store who moonlights as an Uber driver and who also has a massive undeclared crush on his longtime friend Becca (Betty Gilpin). Detective Vic Manning (Dave Bautista) is a veteran officer who, just hours after Lasik surgery, receives a call from a longtime informant that notorious drug dealer Teijo (Iko Uwais) has come back to the city to handle a major narcotics shipment. Unable to see clearly for the next 12 or so hours after his surgery, Vic ends up scheduling an Uber and it is Stu who arrives to pick him up. The detective forces his new driver to join him on his mission to apprehend Teijo by putting the man’s five-star rating in jeopardy, the duo entering into an uneasy partnership that over the course of the day will end up fundamentally changing both of their lives forever.

High-concept buddy action-comedy Stuber is an ‘80s-style throwback in the vein of 48hrs., Midnight Run and especially 1986’s Running Scared with Billy Crystal and Gregory Hines and directed by Peter Hyams. Not that screenwriter Tripper Clancy (Four Against the Bank) and director Michael Dowse (Goon) don’t give things an entirely modern bent. Along with having the core feature of the scenario revolving around the hiring of an Uber driver, the filmmakers also root the pair’s initial antagonism and eventual friendship in varying concepts of masculinity and manhood perfect for today’s #MeToo conversations. This aspect gives the film an additional layer of weightiness that ground the proceedings nicely, and as absurd and cartoonish as events become there is still a character-driven authenticity to many of the interpersonal dynamics that are frequently refreshing.

It helps considerably that Dowse and Clancy ended up with Nanjiani and Bautista as their stars. Much like the casting of Crystal and Hines in the aforementioned Running Scared, these two actors showcase magnificent chemistry and pinpoint comedic timing. They also manage to craft a believably complex relationship that richly builds in a number of various idiosyncratic ways as the film goes on. Their give-and-take is obnoxiously humorous yet also still emotionally cathartic, Stu and Vic learning new ways to become better men – better human beings – than they were before they entered into one another’s company. Nanjiani and Bautista find a variety of ways to make all of this work no matter what sort of nonsense Clancy’s script requires them to do, the two actors tag-teaming the material with a type of effortless aplomb that’s reasonably stupendous.

If only Dowse was as good at staging action as he is at pacing comedy. Hyams might have been a veteran Hollywood journeyman, his resume littered with solid genre favorites like Capricorn One, 2010, Outland, The Presidio, Timecop and The Relic, but he still knew how to deliver crackerjack thrills and chills. Oftentimes working as his own cinematographer, he would choose long extended takes while also centralizing the majority of the action in order to keep the viewer visually attuned to what was happening, judicially editing things in a crisp, clean manner that only helped augment the adrenalized events happening up on the screen.

Initially it looks as if Dowse is going to be able to do the same. An opening prologue featuring Batista and his Guardians of the Galaxy castmate Karen Gillan (in an effective cameo as a fellow LAPD detective) is marvelous. Along with cinematographer Bobby Shore (The Invitation) and editor Jonathan Schwartz (The Spy Who Dumped Me), the director assembles a bone-crunching sequence that’s pretty darn outstanding. But as the movie goes on Dowse seems to eschew the style utilized during this opening for a more quick-cut, hyper-edited aesthetic that, while not making things entirely incoherent, does reduce the excitement quotient by a fairly large amount. Worse, it reduces the singular talents of Uwais to virtual irrelevance, and where Teijo at first appears to be on the way to becoming a singularly monstrous villain worth gleefully hissing at, by the end he’s reduced to being an energetic annoyance and nothing remotely memorable.

Somehow it all ends up working out even with these missteps. Clancy’s screenplay deftly analyzes both Stu and Vic with mischievous introspective honesty, their dual forms of masculinity put under a microscope in order to determine their inherent levels of toxicity. Each has a lot to learn and even more to admit about themselves, their unexcepted day of mutual bonding forcing them to do just that. All of this gives Nanjiani and Bautista plenty of room to flex their comedic muscles. More importantly, it also gives supporting players like Gilpin and Natalie Morales (portraying Vic’s tech-savvy artist daughter Nicole) lots of room to make an impression as well, both adding a great deal of humorous punch whenever they get the chance to be a part of the story.

Mira Sorvino is woefully underutilized as Vic’s superior officer Captain McHenry, her character strangely disappearing just at the point things start getting the most interesting. The film’s climax is also strangely undercooked, and if not Nanjiani and Bautista’s undeniable charms I’m not sure I’d have stayed interested in what was happening all the way until the end. But they are terrific, and the laughs littered throughout this comedic action romp are genuinely hysterical. Stuber is a fun little trip into the ridiculous, and while I’m not about to give this cinematic rideshare a five-star rating, it seems to me three out of four should be more than adequate. 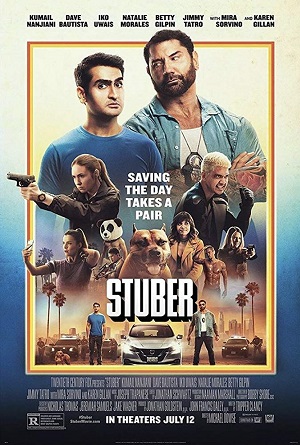