The Sun is Also a Star might be the most infuriating film I’ve seen in 2019, and that’s only because I ended up falling for this teenage romantic drama during its climactic act only for director Ry Russo-Young (Before I Fall) and screenwriter Tracy Oliver (Girls Trip) to tack on a pointless epilogue that had me rolling my eyes in frustration. It’s a brief coda that practically eradicates everything this astute, reasonably intelligent adaptation of author Nicola Yoon’s best-selling novel has been working overtime to accomplish for most of its running time, sending me out of the theatre shaking my head wondering what all involved were thinking when they added this schmaltzy bit of contrived tedium to a story that did not need it.

The story is equal parts dorky romantic fairy tale and moderately clever character study that thanks to its central hook couldn’t be more of the moment. It is Natasha Kingsley’s (Yara Shahidi) last day in New York. Her family is self-deporting back to Jamaica in the morning, the teenager’s parents bringing both her and her brother to the United States when they were small children. Natasha refuses to believe hope is lost, and she journeys into the heart of the city to meet with immigration one last time. She is given the card of a local lawyer who might be able to help, and the young woman is determined to meet with him no matter if she has to wait to do so until the end of the day.

Daniel Bae (Charles Melton) has ventured downtown to be interviewed by a Dartmouth alum about his college application. His parents want him to become a doctor but he’s secretly a poet at heart. But he’s a good son and will follow their directions as to what his future is going to be even if that’s not what he really want. After a surreal series of events has them literally lying on the sidewalk cradled in one another’s arms, and with Daniel’s interview fortuitously rescheduled to the next morning and the immigration lawyer unable to meet with Natasha until later in the afternoon, the pair decide to spend the day together. He, the brazen romantic, believes this is fate. She, the scientifically-minded pragmatist, thinks he’s full of hot air. Yet Natasha is willing to give him the afternoon to prove his thesis, because at worst Daniel’s attempt to do so will take her mind off of her family’s impending deportation and their exile from the only city, the only country, she’s ever called home.

It’s all as hokey as it sounds, but somehow no matter how outlandish and coincidental it all gets (and dang does it get both massively outlandish and insanely coincidental), Russo-Young, Oliver, Shahidi and Melton still make much of this work. What could have been an insipidly overly melodramatic slog instead bursts with imagination and originality. Natasha and Daniel are real. They are easy to root for, the pair’s nonchalant, effortlessly generated charm difficult to resist, while the observationally minimalist way in which Russo-Young chooses to follow the pair throughout their day works shockingly well. Most importantly, Shahidi and Melton are perfect, their relationship building so magnetically even the scenario’s sillier moments have an aura of lived-in authenticity that I couldn’t have resisted even had I wanted to try.

Not that those moments aren’t somewhat trying. This is one of those strange movies that comes out of the gate firing on all cylinders, stumbles a little only to thankfully regain its footing fairly quickly, which then unfortunately leads to things getting bungled in a manner that’s annoyingly upsetting, only for the filmmakers to once again get things back on the right track with spectacular aplomb. But even when things aren’t working the underlying scenario relating to Natasha’s plight is always effective, the deplorable unfairness of her situation depicted with an understated refinement that makes it brutally affecting in a way that ripped my heart straight out of my chest.

It is because of this that the film’s last act ends up being so incredibly stellar. Russo-Young and Oliver fearlessly mine the more universally heartbreaking aspects of Yoon’s source material marvelously, Natasha and Daniel’s relationship venturing into territory that helps crystallize an inhuman immigration policy that’s as abhorrent as it is shortsighted, xenophobic and most of all senseless. Shahidi and Melton are incredible throughout this section. Their dual ability to let silence speak for itself, their trust in one another to understand that less is more, all of this allows what is being showcased to resonate on a deeply personal level. It’s amazing, and had the movie ended with its first fade to black (which is coupled with a deftly candid voiceover from Shahidi) I’m all but certain I’d be praising this romantic drama as if it were one of 2019’s best motion pictures.

But that isn’t where things end. There’s one more scene, and it isn’t one found in Yoon’s book. If anything, this brief epilogue feels as if it were conjured up in some Hollywood studio board room and not by the filmmakers. It undercuts everything that has happened throughout the story, damaging the drama in ways that are frankly inexcusable. While the scene in and of itself is still well directed, and even though the actors are still excellent, the message being sent to the audience is still disastrous, and I kind of wanted something to throw at the screen in abject disgust as soon as I realized what was about to happen.

Granted, I’m still torn about just how much damage this last scene does to the film as a whole. Shahidi and Melton are undeniably tremendous, Autumn Durald’s (Teen Spirit) cinematography is outstanding and Herdís Stefánsdóttir’s score is unforgettably marvelous. The romantic moments have a Douglas Sirk-like inventiveness that allowed the melodrama to take root inside my soul with eloquent grace, Russo-Young directing with a vividly distinct confidence I was instantly drawn to. If only The Sun is Also a Star stuck the landing and hadn’t left such a sour taste in my mouth. This is definitely a case study in how a terrible ending can lead an otherwise fine motion picture down the road to disaster, and the more I continue to think about it the angrier I seem to get. 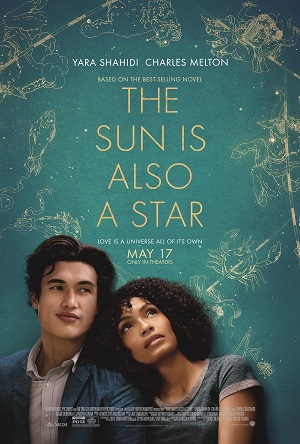