In a small village on the Isle of Wight, 17-year-old Violet (Elle Fanning) lives with her Polish-immigrant mother Marla (Agnieszka Grochowska) on a small farm. The pair are barely getting by, both working at a local bowling alley while they also sell eggs at an outdoor farmer’s market. Violet secretly harbors dreams of becoming a singer, performing a couple nights a week at a neighborhood pub much to her mom’s disapproval. One night her singing catches the eye and the ear of town drunkard Vlad (Zlatko Buric), a former opera star who has through every fault of his own not-so-recently fallen on hard times.

The popular reality television music competition program “Teen Spirit” is going to be holding auditions in the Isle of Wight for the very first time and Violet wants to participate. Needing a parent or guardian’s consent, and fearing Marla will not approve, she convinces Vlad to pretend to be her uncle and agrees to let him become her manager if she passes to the next round of the contest. Shockingly that’s exactly what happens, and with her success no longer a secret and now the talk of the entire town Violet needs her mother’s support before she can travel to London to compete in front of a worldwide television audience for the grand prize.

That she gets it isn’t a surprise. That she finds herself a backwoods fish out of water when she reaches London is even less of one. Not a single thing that happens in writer/director Max Minghella’s debut Teen Spirit would be considered as anything even close to shocking, this music-driven drama following a traditional path as its heroine follows her dreams and reaches for stardom. But while not exactly believable, this is still a feisty modern-day fairy tale that brought a great big smile to my face. Centered around a superb performance from Fanning and featuring a number of superlative musical numbers (including bravura covers of “Dancing On My Own,” “Little Bird” and “Don’t Kill My Vibe”), this movie is a consistent joy first frame to last.

For me, the reason all of this works as well as it does is in large part because Minghella grounds his story in authentic human emotions. No matter how unbelievable things might be, because Violet, Vlad and Marla are real the fantastical nature of the scenario they’re involved with doesn’t seem nearly as farfetched as it otherwise could have. The relationships the teen has with both of her adult mentors, even when explored in narrative shorthand, are genuine, their hardscrabble complexity giving events a lived-in veneer that’s heartfelt and emotionally pure.

This does not make the film any less old-fashioned or generic. There are moments where Minghella’s drama feels more like a Mickey Rooney/Judy Garland vehicle from the 1930s, if only one that’s been slightly modernized thanks to its neon visuals, energetic editing and that thumping club beat. Yet this strategy works. Violet’s innate innocence shines through, and not in a way that feels cloying or saccharine. Instead, there is an observational clarity to this whirlwind journey that’s refreshing, and even if the outcome is never in doubt watching the youngster get to the point she’s ready to take the stage and show exactly what it is she’s made of is well worth the wait.

Don’t get me wrong. Minghella’s script doesn’t even make a pretense of avoiding cliché. Vlad’s chronic drunkenness is a problem that could derail the singer’s momentum. There are some potentially shady music industry executives (led by a seductively beguiling Rebecca Hall) working hard to convince Violet to sign a recording contract that doesn’t have her best interests at heart. One of the members of the band the teenager convinces to join her on this adventure harbors a not-so-secret crush on the singer. The previous year’s “Teen Spirit” victor may be manipulating Violet in order to help engineer a positive outcome for someone else when he feigns romantic interest in her. The outcomes to all of those items (as well as one or two additional minor plot points) is never in doubt, and as I’ve already mentioned this means anything resembling a surprise is difficult to come by.

Yet, Minghella’s strategy as far as the best way to tell his story works astonishingly well. The emotions are allowed to form naturalistically and with very little in the way of artificial augmentation. Violet and Vlad’s connection forms with shocking ease, all of which makes their penultimate hug before the singer takes the stage at the competition mean something distinctively personal, their emotionally-drained embrace after her triumphant performance even more so. As for Fanning, not only can she sing, she also delivers a performance that’s right up there with the celebrated young actress’ best, sitting alongside her memorable turns in 20th Century Women, The Neon Demon, Ginger & Rosa and Super 8 with no problem whatsoever.

I loved how this movie came to an end. Violet and her band demolish the “Teen Spirit” stage during their performance, their collective fiery bravado infectious. What’s even better are the moments immediately after their number had come to its end. The look of breathless exhaustion as Violet almost collapses in the arms of her bandmates is marvelous, as is the knowingly triumphant smile that slowly expands across her face as the teen realizes that, win or lose the contest, she’s discovered exactly what it is she’ll be doing for the rest of her life. It’s a perfect moment and one that is both well-earned and entirely justified. It helps make Teen Spirit the rousing sensation it eventually becomes, this ebulliently youthful concert of friendship and family a jubilant sing-a-long song I seriously doubt I’ll be the only one humming for the rest of 2019. 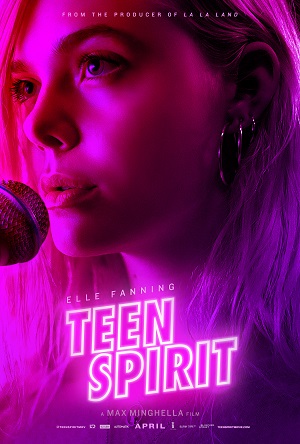