Hunter (Haley Bennett) appears to be living a real-life fairy tale. She’s married to the rich, powerful and fabulously attractive Richie Conrad (Austin Stowell), and has apparently been accepted by his prim and proper parents Katherine (Elizabeth Marvel) and Michael (David Rasche) with open arms. The pair live in an immaculately maintained suburban home filled with all types of modern conveniences. Hunter herself has the best of everything including clothes, shoes, makeup and jewelry. It’s all a picture-perfect dream come true, the young woman having it all and then some.

But looks aren’t everything. Hunter is unhappy. She’s lonely. She often feels like a porcelain doll trapped inside a glass display case as if she were in a massive diorama for all the world to look at, fawn over and judge. The newlywed wife longs for honest human interactions, or at least something that makes her feel like more than another one of her husband Richie’s expensive possessions. Hunter wants to feel alive, wants to have a secret that is hers and hers alone, and somehow, someway she’s going to make sure this happens.

Less is more as it pertains to Carlo Mirabella-Davis’ (The Swell Season) marvelous feature-length narrative debut Swallow, and I was so glad that I knew not much more than that basic narrative outline before I sat down to give this emotionally stirring drama a look. This is an intimate, masterfully modulated character study of abuse, isolation, depression and obsession that grows in chillingly personal impact as it goes along, ultimately exploding as a deeply complex and shatteringly effective saga of female empowerment and individual self-discovery that blew me away.

The initial hook is that Hunter develops a psychological medical condition known as “Pica,” a disorder where people begin ingesting items that are, to put it mildly, normally inedible. In this case, Hunter begins swallowing several strange items, including earrings, marbles, pushpins and even a battery. Complications unsurprisingly arise once her new family becomes aware of the situation, Richie and his parents getting her the best in medical care, a seemingly caring psychiatrist and even a watchful aid to keep an eye on her around the house.

It is here where the film begins to confidently come into its own. While Hunter’s condition is definitely in need of treatment, it is how the rest of the Conrads react to it outside the glare of the public where their true colors emerge, as it is that very socially acceptable image they wish to protect more than anything else. For them, perception is reality, the carefully constructed artifice more authentic than any fantasy. The deeper issues Hunter’s battle with Pica end up revealing are hardly their concern, the only thing they want her to be is a pretty face who sits there and smiles, says the right things and bares a kid or two to ensure the continuation of the family name.

This is an all-too-common refrain young women hear far too much of, even in today’s #MeToo environment. Sit still. Look pretty. Be silent. Don’t have an opinion. Keep a spotless home. Make sure dinner is on the table. Don’t make waves. This is what Hunter believes she should be okay with until the realization hits her that having all of that will ruin her life. She finds there is more to living than seeming to “have it all,” and if one’s own internal demons aren’t laid to rest than even a passing semblance of personal happiness will end up being impossible.

Back in 2007 I’d made a passing remark that youngster Haley Bennett came close to stealing the charming romantic comedy Music and Lyrics right out from underneath megastar leads Hugh Grant and Drew Barrymore, no small feat in my book. Her performance as pop starlet Cora Corman was a total delight, and I instantly knew that, if given the right opportunity, she had all the makings of a major star.

After solid turns supporting turns in a variety of motion pictures, including the otherwise disappointing Emily Blunt thriller The Girl on the Train and the reasonably solid The Magnificent Seven remake starring Denzel Washington and Chris Pratt, Bennett is finally given a lead role that matches her superlative talents. Her performance as Hunter is a constant revelation, the young woman’s early breathy timidity masking a bevy of deeper insecurities, all of which are stripped away piecemeal with each inanimate object she digests. Bennett never overplays her hand, keeping her emotions in check until the moment they burst unexpectedly out into the open as if she were a human-shaped balloon pricked by a sinisterly sharpened bobby pin.

There are a couple of key subplots Mirabella-Davis takes great care to explore in shocking detail, but I’m reticent to go into either of them as doing so would spoil the film’s final act. What I will say is that one of them proves to be so shocking, it’s likely the final scene might trigger a catastrophic response from some members of the audience. At the very least, it will certainly fuel some heated debates between viewers contemplating exactly why Hunter makes the decision that she does and what doing so will mean for her psychological well-being moving forward.

As to the other one, it’s the catalyst that makes this climax possible, so I don’t even want to hint what happens there. What I will say is that veteran character actor Denis O’Hare makes a pivotal appearance, and the resulting scene between he and Bennett is extraordinary. In the space of five or so minutes, Mirabella-Davis manages to bring all of the various themes he’s been exploring throughout Swallow to shockingly haunting culmination, all of which makes his insightful drama nothing less than unforgettable. 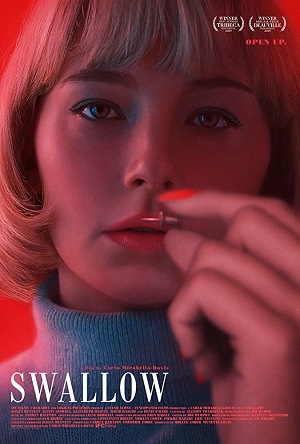