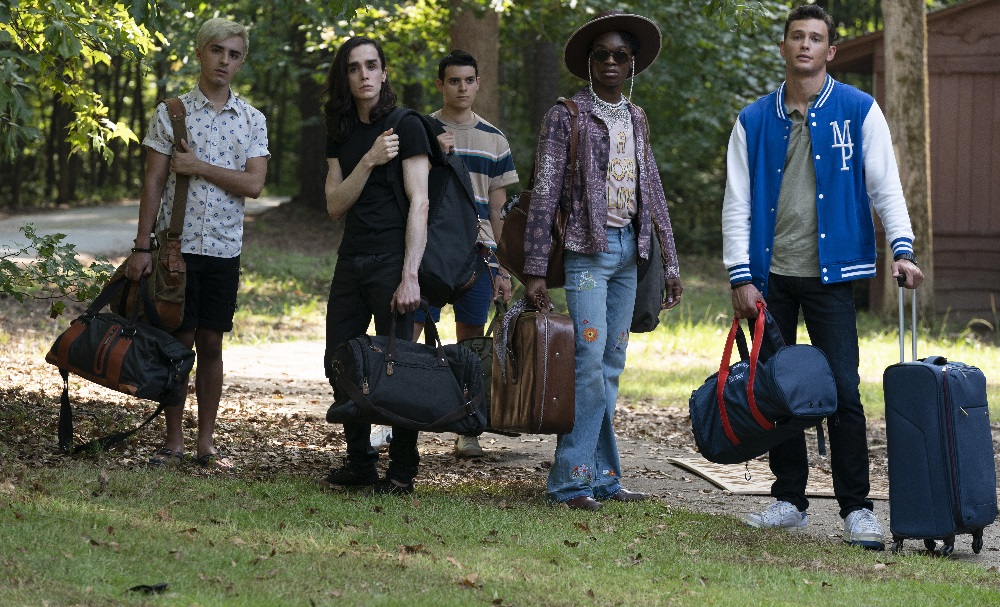 I’ve seen a lot of bad movies in 2022. I have not watched any that made me so angry I wanted to start throwing things at the screen. Until now. They/Them is a traumatizing nightmare.

Terrific premise. Exemplary cast. Talented, Oscar-nominated screenwriter making his directorial debut. All the elements for a wonderful little LGBTQ+-themed summer camp horror film are in place. But Gladiator, The Aviator, and Hugo scribe John Logan drops the ball, crafting an infuriating mess of a topical slasher that’s so misbegotten it comes perilously close to being insulting.

Logan does lay a foundation built on a clever idea. Whistler Camp is a conversion summer camp for LGBTQ+ teens. It is run by Owen Whistler (Kevin Bacon) and his wife Cora (Carrie Preston) and is staffed by former attendees who feel it is their mission to lead other homosexuals toward heterosexual normalcy. This year’s crop of arrivals includes the usual group of Gay, Lesbian, and Trans campers, with Nonbinary Jordan (Theo Germaine) and their “they/them” pronouns the one individual causing Owen to reconsider his usual physical and psychological tactics.

Basically, this is a But I’m a Cheerleader or The Miseducation of Cameron Post retread, only crossed with Friday the 13th or The Burning to give events some additional kick. Not only does Logan depict the abhorrent terrors of conversion therapy, but he also adds a masked killer into the mix. This mystery person has an agenda, and it’s one Jordan and the rest of the campers must figure out unless they want to become a part of the growing body count. But to do that they’ll also have to endure Owen’s increasingly inhumane rehabilitation techniques, making things more of a lose-lose situation for the kids with each passing second.

It’s great having Bacon back in a summer camp slasher, and he certainly knows how to make the insidious most of every second of his screen time. The supporting cast of campers is also a suitably diverse bunch, with Germaine unsurprisingly making the most lasting impression. Other standouts include Quei Tann, Monique Kim, Anna Lore, Austin Crute, and Cooper Koch.

One member of the ensemble who didn’t do much for me was Darwin del Fabro, but this has more to do with how their character is written than the actual performance. But as going into greater detail on this topic would be a massive spoiler, I’ll just leave things there for now. Same with Anna Chlumsky’s turn as the camp’s inquisitive medic, Molly.

I believe the idea that Logan is going for is that the reasons behind the camp and what Owen and his staff are doing to the kids is far more grotesque than any of the brutal murders. As such, a lot of time is spent dwelling on the dehumanization of the campers, using methods ranging from the passive aggressive to the regressively heteronormative, from Stepford-ish reconditioning to violent physical abuse.

But it all becomes a hellish blur. Logan dwells on this disquieting nastiness in a manner that borders on cruel. He appears to take great relish in depicting every sadistic act. It’s exhausting — and only gets worse as the film goes along.

There’s a rancid twist roughly around the midway point that almost makes it feel like Logan is trying to say that the campers are responsible for how they are being treated. If Bacon didn’t do such a superb job making Owen’s malevolence crystal clear, I’d even go so far as to forgive viewers if they thought he was supposed to be looked at as something of a flawed antihero and not a monstrous force of unforgivable evil.

Then there is the reveal of the killer and the laundry list of the whys fueling their actions. I had it pegged early on who this masked menace was going to be, but I kept hoping my suspicions were going to be proven wrong. This reveal is infuriating, not because a character like this can’t be a murderer, but because their reasons for choosing homicide as their retort to societal ills feed into tropes that are reprehensibly regressive.

Representation matters. But good intentions are not everything, and they can sometimes lead creators down paths that are even more despicable than pure exploitation ever wandered along even during the genre’s 1970s–80s heyday (The Little Girl Who Lived Down the Lane, I Spit on Your Grave, The Last House on the Left, Sleepaway Camp, etc.). There are choices Logan makes with the material and characters that are so downright infuriating that just thinking about certain scenes makes my blood boil.

Again, I do have to be vague, as I know many will still give this film a look, so I don’t want to inadvertently reveal any of its secrets. But in his attempt to broaden horizons and give a voice to a diverse group of LGBTQ+ characters while still staying true to the mechanics of the slasher genre, Logan ends up enforcing more ugly stereotypes than he deconstructs or subverts. They/Them hits like a punch to the face that’s been coupled with a kick to the groin and augmented by a knife shoved straight into the viewer’s back, and the longer it went on, the more I began to wish it didn’t exist in the first place. 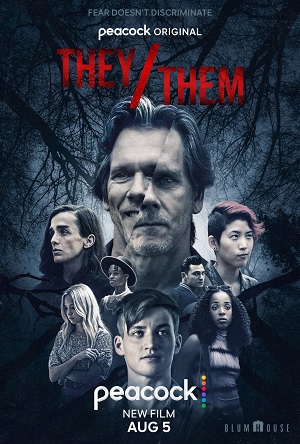