NOTE: This feature originally appeared in the November 4, 2022 edition of the Seattle Gay News. It is reprinted here by permission of the publisher Angela Craigin.

I saw Kathryn Bigelow’s Near Dark with my dad around the middle of October 1987. We were at Spokane’s Magic Lantern to see John Boorman’s semiautobiographical WWII drama Hope and Glory, but for some reason we got there late, and I talked him into buying tickets for Bigelow’s horror-Western hybrid instead.

Even though we’d watched plenty of horror flicks at the local drive-in, as genres go, this was not one of my father’s favorites. I think I convinced him we should give it a shot by saying it was an action film starring three of the actors from Aliens, and not a tale of vampires stalking the deserted highways and rundown small towns of the American Midwest.

I was so absorbed in what was happening that I did not monitor my dad’s reactions to all of the violent, blood-splattered madness Bigelow so expertly orchestrated. The movie held me spellbound. What I do recall is his brief statement after we’d gotten back to the car. “Damn!” he proclaimed. “That was pretty dang good. Damn good. Glad you talked me into it.”

That was it. Nothing more. Just a simple statement of affirmation that I picked something good for the two of us to see. But as we drove home in silence, the smile on my face never disappeared. This was our moment. We’d had a nice night at the theater, and for the first time, I was the one who chose what we saw.

But he was also right. Bigelow’s Near Dark is a damn good motion picture. The past 35 years have proven it’s even better than that. This moody little marvel has slowly progressed past cult classic status and begun to move up the ranks to loftier heights. While I won’t say it’s entered into many “masterpiece” conversations, it does feel like things have moved in that direction. Not bad for a low-budget shocker that critics may have championed but audiences mostly went out of their way to ignore.

The scenario by Bigelow and co-writer Eric Red (The Hitcher) plays like a melding of a Howard Hawks Western crossed with a Fritz Lang noir. Cowboy Caleb Colton (Adrian Pasdar) saunters into town after a long day working the family farm with his veterinarian father Loy (Tim Thomerson) and precocious little sister Sarah (Marcie Leeds). He meets a beautiful stranger, Mae (Jenny Wright), standing underneath a lonely streetlight, and immediately sparks fly.

One thing leads to another, and they’re suddenly kissing in the front seat of his truck. But the dawn is coming, and Mae bolts out into the empty street, terrified, but not before she inadvertently bites Caleb on the neck. Next thing he knows, he’s been abducted by a feral family of outsiders led by the exuberantly vicious Jesse Hooker (Lance Henriksen) and his cutthroat reptilian ladylove Diamondback (Jenette Goldstein). Caleb has to figure out what is going on, who these people are, and what he needs to do to get back home, and if he can save Mae in the process, that would be A-OK by him as well.

The word “vampire” is never uttered, but it’s readily apparent what Jesse and his small band of carnivorous cutthroats are. They can only come out at night. Sunlight kills them. They must drink human blood to survive. A simple bite has transformative properties. The math is clear.

Bigelow finds macabre poetry in this simplicity. She strips the mythology out of these creatures and makes them more human — and thus far more terrifying — than almost any other cinematic depiction. She pulls from Western, noir, and melodramatic coming-of-age tropes and, instead of twisting things on their head, plays them all relatively straight. This allows for the brutality of Caleb’s situation to hit home with a pugilistic intensity that’s jarring. It also gives his classical love affair with Mae a ring of poignant truthfulness that’s entirely unexpected.

All of the themes Bigelow and Red are playing with come together with fiery fortitude in a rundown saloon in the middle of the Texan nowhere. It is here that Jesse has ordered Caleb to make his first kill. While an earlier montage shows how this undead band of beastly miscreants get through the night and the ways each stalks their prey, the bar massacre is where their full powers are finally unleashed — and it is chillingly glorious.

This is also the moment where the late, great Bill Paxton struts his stuff with charismatic, malevolent forcefulness. He dominates the sequence with cocksure panache, toying with each person unlucky enough to be in the bar with a cartoonish urgency that’s a combination of James Dean’s cool, Elvis Presley’s moxie, and Vincent Price’s operatic flamboyance. It’s stunning stuff, and a powerful reminder of Paxton’s massive talent, which was sadly so seldom utilized to its fullest potential.

Bigelow would go on to become the first woman to win both Best Director and Best Picture Oscars for The Hurt Locker in 2010; she would receive a second Best Picture nomination for Zero Dark Thirty in 2013. The filmmaker also helmed two additional classics in the 1990s, Point Break and Strange Days, both of which, much like Near Dark, were dismissed during their initial releases only to build passionate followings over the succeeding years.

As wonderful as all of that is, my affinity for Near Dark goes back to that first viewing as a wide-eyed 13-year-old sitting next to my stern, tight-lipped father. As a kid, I was spellbound. As an adult, each revisit brings me new pleasures as I discover layers to Bigelow’s chilling horror masterwork I hadn’t noticed before.

Yet it’s the simple happiness I find in knowing I’d led my father to a place outside of his comfort zone and that he’d enjoyed the trek that makes the film so personally memorable. We don’t see eye to eye on a lot of things. Our differences are massive. Even so, he continues to seek my opinion and is willing to challenge himself by watching films that don’t perfectly align with his worldview. This brings me untold joy.

Not all of my recommendations turn out to be as “damn good” as Near Dark, and that’s how it should be. We still have great conversations afterward the majority of the time, and very rarely do we disagree so severely that the only appropriate reaction is silence. While I dearly love Bigelow’s film, I love that even more.

Now celebrating its 35th anniversary, Near Dark is available to stream on the Criterion Channel. It is currently unavailable on DVD or Blu-ray. 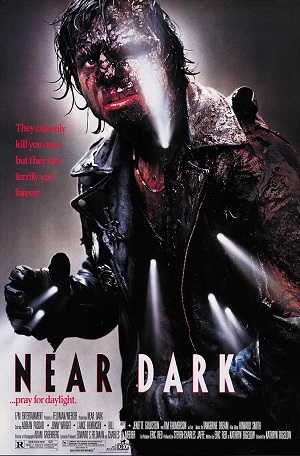