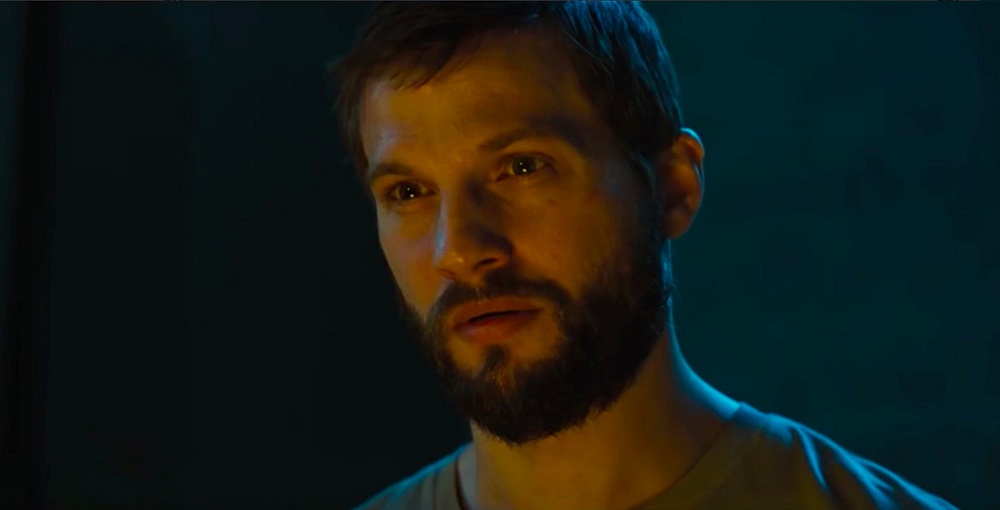 Mechanic Grey Trace (Logan Marshall-Green) specializes in fixing up old muscle cars for wealthy clientele is on the edge of letting go. His wife Asha (Melanie Vallejo) was brutally murdered, the quartet of killers purposefully leaving him a quadriplegic in order to inflict the maximum amount of pain and suffering as he sat there and watched her die, unable to lift a single finger to help. Right as he’s about to give up on life, former customer and cybernetic genius Eron (Harrison Gilbertson) offers Grey an unreal opportunity, asking him to volunteer for a top secret medical procedure that could heal his spine and allow the mechanic to walk again. He’ll implant a tiny microchip given the name “STEM” into the base of the quadriplegic’s spine, and if all goes according to plan it will provide a bridge between brain, bone, muscle and tendon, not so much repairing these broken connections as it will allow all of the body’s damaged components to communicate with one another as if nothing was originally wrong.

But Eron didn’t tell Grey everything. Turns out STEM (voiced by Simon Maiden) can do more than just allow a quadriplegic to walk again. He can communicate with Grey directly, offering to assist the grieving husband to help find those responsible for murdering his wife. More, STEM can take over all of his motor functions if given the authorization. This means that if Grey ends up in a situation that could potentially prove to be lethal, this little microchip can, almost as if at the flick of a switch, transform him into an unstoppable killing machine ready and willing to do whatever it takes to survive. Together, man and microchip will join forces to solve the mystery of Asha’s murder, in the process uncovering a terrifying secret that could alter the way humanity interacts with technology forever.

Writer/director Leigh Whannell, along with James Wan one of the minds behind both the popular Saw and Insidious franchises, steps behind the camera for the second time with the original science fiction-thriller Upgrade. This sophomore outing is a huge leap forward after the fine, reasonably entertaining but also almost instantly forgettable sequel Insidious: Chapter 3, this movie an engaging, incredibly energetic and oftentimes thrilling bloody action flick that when over I wanted to stand up and cheer. Featuring a strong performance from Marshall-Green and a number of terrific, eye-popping set pieces that are as gripping as they are gruesome, this R-rated throwback is a burly enterprise chock-full of fresh ideas and assertively vicious thrills and chills. I loved it. Better, I can’t wait to head back to the theatre and watch it again.

Pulling from a large pool of influences ranging from old school pulpy Mickey Spillane/ Raymond Chandler/ Dashiell Hammett detective noir, to cerebral Ray Bradbury/ Harlan Ellison/ Philip K. Dick science fiction, to brawny John McTiernan/John Sturges/Don Siegel cinematic action theatrics, Whannell has certainly done his homework. But instead of feeling like some hodgepodge of influences and ideas pulled willy-nilly out of the ether with no concept of how to make them all mesh into something approaching a cohesive whole, the director does a fine job of making all these disparate elements organically fit together. As absurd as this story might be it still feels real, Grey’s descent into blood-splattered mystery oozing emotional authenticity no matter how unbelievable or extreme events themselves might eventually become.

The first time STEM and Grey join forces to battle a bad guy is the film’s high-water mark, and as great as everything that follows might be the initial jolt of adrenaline when the human host allows his cybernetic companion to take over and save them is so extraordinary nothing that happens afterwards can ever quite equal it. Part of the reason for this is Whannell’s confident framing of the action, he and cinematographer Stefan Duscio (Jungle) playfully allowing the scene to take shape with a minimum of edits. The more important reason has everything to do with Marshall-Green’s suitably shocked performance. His character’s disbelief as to what his body is doing, and his eventual pleading that his attacker stop trying to hit him because Grey doesn’t want to hurt him any more than he already has, is goofily perfect. All of which makes the petrified shock the actor showcases at the end of the scene all the more effective,  the unanticipated grotesque glory of what transpires packing a flabbergasting emotional wallop I honestly didn’t see coming. 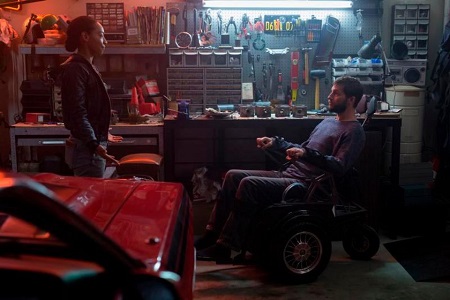 As good as Marshall-Green is, and he is very, very good, on the whole the quality of the performances vary wildly. Vallejo is lovely as Asha, the actress adding a layer of sweetness and cheerfulness that’s divine. Maiden is equally strong as STEM, the many layers of his verbal delivery fluctuating between understanding, tenderness, aggression and authoritative dominance, his soothing mechanical cadence concealing a devilish duplicity that’s noticeably perceptible even if the reasons for his insincerity aren’t always clear. Best of all is Get Out scene-stealer Betty Gabriel as a curious police detective who begins to suspect there’s more to Grey than meets the eye, the manner in which she puts the pieces of this puzzle together containing a grizzled open-minded gravitas that’s wonderful.

The villains do not fare nearly as well. Most of them come across as faceless nobodies the story has precious little interest in, almost all of them becoming nothing more than potential cannon fodder for Grey and STEM to dismember limb by limb. The exception is Benedict Hardie. He plays Fisk, a human-cybernetic hybrid who has intimate knowledge as to what happened to Asha and why she was singled out for assassination. I don’t quite get what the character actor is doing here. His performance isn’t so much bad as it is weird. I just couldn’t make heads or tails out of it, all of which makes his character’s third act confrontation with Grey fall oddly flat just at the most inopportune moment possible. As for Gilbertson, I just don’t have a lot to say, his work as the child-like tech genius nothing special, and as such my impression of the character and of his plans never changed at any point during the film’s reasonably well-paced 95-minute running time.

None of which thankfully affected my overall enjoyment of the film. Whannell has crafted a nimble and nifty futuristic thriller that’s as brawny as it is brainy, and even if his story’s resolution isn’t as shocking or as much of a surprise as I’m certain it was intended to be that still doesn’t make it any less successful. Upgrade is a total blast, and if in the coming years this bit of muscular, blood-soaked science fiction silliness were to spawn a sequel I’ll be first in line to see what sort of aggressively violent trouble Grey and STEM will get themselves into next. 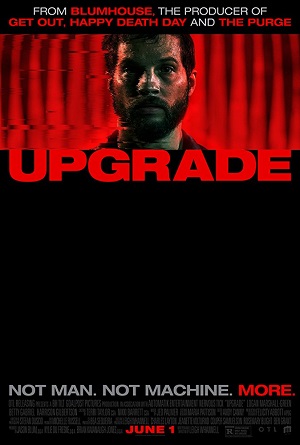