Discovering the wild, crazy world of Jackie Chan when I was in college was a blast of adrenaline-filled bliss. From Drunken Master to Wheels on Meals, Project A to Operation Condor, every new feature was something glorious. It was all topped off by the magnificent, eye-popping heights of the original Police Story trilogy, 1992’s Police Story 3: Supercop one of the greatest action-comedy spectacles ever made.

Even though he was the biggest star in the world, numerous books have been written as to why Hollywood initially failed to make Chan a household name in the United States in the 1980s. Between 1985’s generic James Glickenhaus actioner The Protector and 1981’s rather anemic Burt Reynolds all-star The Gumball Rally riff Cannonball Run, it’s oddly the latter that showcases the actor’s talents best. It wasn’t until a decade later and 1995’s Rumble in the Bronx that Chan had a hit with American audiences, 1998’s Rush Hour with Chris Tucker and 2000’s Shanghai Noon with Owen Wilson also both hugely popular favorites that led to financially successful sequels.

Over the past decade Chan’s star has waned considerably as far as Hollywood has been concerned, and while 2017’s The Foreigner co-starring Pierce Brosnan and directed by James Bond veteran Martin Campbell performed decently enough with critics and at the box office, that’s been the exception and not the rule for the beloved actor. There just hasn’t been much to talk about, and other than being awarded a well-deserved honorary Academy Award in 2017 I can’t say Chan has been all that high on anyone’s radar (let alone mine) for quite some time now.

Not that he hasn’t kept busy. Chan has been involved in something like 20 features since 2011, most of them Chinese productions of varying quality. The latest of these is frequent collaborator Stanley Tong’s (Rumble in the Bronx, First Strike) untidy action-comedy Vanguard, and as throwbacks go to the actor’s 20th-century work it admittedly comes close to hitting its entertainment mark. Chan’s stunt team is as impressive as ever, and especially early on I almost believed the film was going to recapture some of that Police Story magic.

I shouldn’t have gotten my hopes up. The digital age has not been kind to Tong, and there’s too much computer-generated fakery happening to fully appreciate how the acrobatic stunt performers willingly throw themselves around with such fearless abandon. Additionally, none of the central actors strike the requisite balance between the over-the-top comedy and purposefully schlocky melodrama the same way that Chan can, and while he’s the above the title star he’s also hardly the central figure as far as this ensemble is concerned.

The plot is some nonsensical insanity about an international protections service called “Vanguard” whose selfless members find themselves guarding the daughter of a former mob accountant from some shady bad guys mainly because he knows the whereabouts of some missing gold. Chan runs the organization, heading out with his team on their missions as they crisscross the globe. It all culminates in Dubai in a massive set piece which includes multiple explosions, the potential bombing by high-tech drone of a U.S. aircraft carrier, a pair of car chases straight out of the Fast and the Furious franchise, a guy floating through the air like he’s riding a Back to the Future hoverboard and an elongated shootout that even John Woo would likely find excessive.

Other than a CGI lion that makes the one in Rogue look more photorealistic than the creatures found in 2019’s The Lion King remake and some dodgy water effects, there’s a terrific African action sequence filled to the brim with magnificent stunt work. There’s also an early sequence where Yang Yang and Ai Lun rescue the aforementioned accountant that’s extremely well staged, a section inside a large hotel kitchen particularly strong. Finally, while he isn’t the focal point of the unfolding drama, Chan does have a couple of divine moments that remind viewers exactly why we all fell in love with him in the first place, and that is no small thing.

Not that it makes Vanguard worthy of a recommendation. It’s a lackluster, inanely plotted throwback that relies far too heavily on ineffective digital effects. While the ensemble surrounding Chan is pretty enough to look at (especially Yang, Lun and Mu Qimiy as the young woman the team is attempting to protect), none of them have that memorable spark of inventive inspiration their legendary costar showcases with such apparent ease. While harmless and not altogether without its minor pleasures, this film is instantly forgettable, and if one wants to see Chan at the height of his creative powers I suggest re-watching the original Police Story trilogy instead of this. 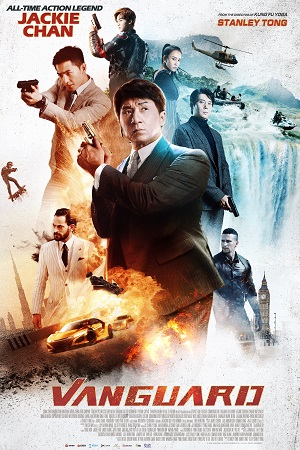