The pre-title sequence of director Jon Favreau’s (Iron Man, Chef) photorealistic remake of Disney’s 1994 animated favorite The Lion King is admittedly extraordinary. In its full IMAX glory, this opening section depicting the birth of infant lion cub Simba on Pride Rock to parents Mufasa (voiced by James Earl Jones) and Sarabi (Alfre Woodard) and set to Elton John and Tim Rice’s Oscar-nominated “Circle of Life” is suitably eye-popping. It is immediately obvious that every penny of the film’s budget was put to use making sure all of the technological wizards tasked with making all of these creatures and environments look authentic did their respective jobs to perfection, and I’d be lying if I didn’t admit to being impressed by every second of this roughly four-minute prologue.

But that’s the movie in a nutshell. Unlike Favreau and Disney’s almost equally visually impressive 2016 take on The Jungle Book, this attempt at remaking an animated treasure with modern effects is emotionally empty and creatively moribund. This version of The Lion King seems to be perfectly content with being a virtual shot-for-shot redo with a few extended scenes here and one new song (“Spirit,” co-written and performed by Beyoncé) there, none of which add anything notable to the proceedings. It’s a carbon copy that I found difficult to care about, and other than a couple of individual scenes and a handful of strong vocal performances there was precious little that stuck with me as I left the theatre and headed for home.

The story remains the same. Lion cub Simba (JD McCrary) is best friends with the inquisitive Nala (Shahadi Wright Joseph) and learns about what it means to be a good king from his revered father Mufasa. Unbeknownst them all the monarch’s vindictive younger brother Scar (Chiwetel Ejiofor) conspires in the background to usurp his sibling’s throne. After engineering an accident that leads to tragedy, Scar convinces Simba to run away from home and never return, sending a pack of hungry hyenas after his nephew hoping they’ll eat the cub for dinner. But he escapes into the desert, and thanks to jokey pranksters Timon (Billy Eichner), a meerkat, and Pumba (Seth Rogen), a warthog, the youngster is taken to a beautiful oasis where he can grow into adulthood in safety.

Sometime later, an adult Nala (Beyoncé Knowles-Carter) discovers Simba’s (Donald Glover) secluded hideaway and implores him to return to his kingdom and take his rightful place upon the throne. Scar has allowed the hyenas to hunt their homeland to the brink of extinction, and she believes Mufasa’s son is the only one who could stand up against this tyrant and convince all of the lionesses to fight back before it is too late. Initially hesitant, Simba is reminded by the wise baboon Rafiki (John Kani) who he is and what he was taught as a child by his father, and in the end decides to join Nala on her return to trip to Pride Rock.

Let me get this out of the way up front: The photorealism of the animation (and, yes, it is still animation; there’s nothing “live action” about this remake) fundamentally weakens the film’s dramatic intensity. While what Favreau and company have delivered is undeniably impressive from a technical standpoint, from an emotional one this take on the story cannot help but feel muted and insincere for most of its running time. It almost becomes a nature documentary only Disneynature’s African Cats had more dramatic oomph than this film does, and it becomes increasingly difficult to tell which lion is which (especially in regards to the lionesses), so little differentiation between the characters forcing them to unintentionally blur one into the other at the most inopportune at times. Additionally, because they’re all supposed to look so life-like they cannot emote in any substantive way, so when Scar pulls off his coup and Mufasa learns the truth of his brother’s treachery, or when an adult Simba returns to Pride Rock for and cathartically reunites with his mother Sarabi, none of this had any sort of impact upon me.

As detrimental to the film as all of that might be, a bigger issue is that, by and large, Favreau and his team don’t do anything that sets this new take on the material apart from its far more emotionally engaging 1994 predecessor. They are fully content to duplicate key shots and memorable moments beat for beat, and while screenwriter Jeff Nathanson (Pirates of the Caribbean: Dead Men Tell No Tales) modernizes some of the dialogue, that’s pretty much it as far as any sort of noticeable variations between the original and this new interpretation are concerned. It reminded me of Gus Van Sant’s 1998 remake of Alfred Hitchcock’s 1960 classic Psycho, but where for him that was an artistic exercise to see if he could pull off a full-color shot-for-shot reworking of a bona fide masterpiece, here, no matter what Favreau or any of his collaborators might want to say to the contrary, this only feels like an excuse to nostalgia-bate people into the theatre to watch a creatively bankrupt recycling of story that was far better told and executed the first time around.

Look. I’m not going to get on some high horse and state I’m fundamentally against all of these Disney remakes of their beloved hand-drawn animated catalog. While I wish they’d spend more time coming up with original stories instead of recycling all of these older ones, it isn’t like I haven’t enjoyed the majority of them. My loathing of 2017’s Beauty and the Beast aside, both 2015’s Cinderella and 2016’s Pete’s Dragon made my personal top ten lists their respective years. Heck, I wrote positive reviews for this past March’s Dumbo and May’s Aladdin, and even though I didn’t particularly care for 2014’s Maleficent I’m beyond curious to see Angelina Jolie and Michelle Pfeiffer face off against one another in its sequel Maleficent: Mistress of Evil when it hits theatres in October.

But after the visual virtuosity of this new The Lion King wore off the movie as a whole couldn’t help but leave me cold. I wasn’t personally invested in what was going to happen to the inhabitants of Pride Rock, could have cared less if Simba would regain control of his ancestral home and that Scar and the hyenas would be defeated. None of it mattered to me, and while I wanted to shrug my shoulders and whisper inaudibly, “Hakuna Matata,” as the end credits began their scrawl, the truth of the matter is that I felt no love for this remake, it’s overall storytelling mediocrity a circle of never-ending disappointment I couldn’t wait to be finished with. 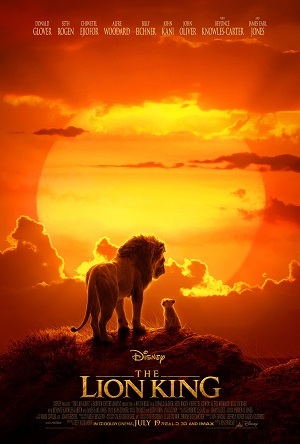