Yakov Ronen (Dave Davis) has returned to Brooklyn’s Hasidic Borough Park neighborhood to do a job. He is hardly as devout as he once was, his faith recently shattered by a traumatic event. But when former friend Reb Shulem (Menashe Lustig) offers him $400 to sit overnight as a “shomer” (the person who carries out the Jewish practice of watching over the body of a deceased community member) for the late husband of Mrs. Litvak (Lynn Cohen), he’s in no position to turn him down, as he’s in desperate need of the cash.

Maybe he shouldn’t have been so quick to accept the rabbi’s money. Mrs. Litvak does not want Yakov there. The previous shomer left under mysterious circumstances, and she’s insistent he does the same before it is too late. Undaunted, Yakov puts the old woman to bed, promising he’ll look after her husband until the morning, certain nothing strange or unusual will take place during the night.

He’s wrong, of course, The Vigil writer-director Keith Thomas unleashing a slow-burn descent into supernatural terror that will force Yakov to confront personal tragedies that have led him to leave the Hasidic fold. There was a demonic presence stalking Mrs. Litvak’s husband, and now it is looking for someone new to haunt. This leads to a fiery battle of wills with Yakov’s immortal soul on the line, and the young man must make peace with his grief while also reconnecting with his lapsed faith, the only weapon he has at his disposal in this fight.

One of the more interesting aspects of Thomas’s feature-length debut is how authentic it feels. While I’m not Jewish, this is one of the few horror movies utilizing that religion’s scriptural terrors that actually seems to involve a protagonist from the community itself. Moreover, most stories dealing with crises of faith tend to revolve around Catholics and other Christians. This helps make Yakov a fascinatingly unique character on multiple levels, and because of this, I was understandably intrigued to learn what he was going to do next.

The basic spooky-business involving the menace haunting this home isn’t anything spectacular. Once the outline of what is happening and why is made clear, the only question is whether or not Yakov can put enough pieces together and defeat this evil before he is doomed to live a life of demonic sorrow similar to Mrs. Litvak’s poor husband. There’s some rather standard misdirection at play, and one or two red herrings muddy the waters, but there aren’t a lot of surprises as to what this thing is and why it is drawn to the young man guarding its former prey.

Yet Thomas still manages a decent handful of solid scares. He sets the appropriate mood, an aura of uncertainty permeating every frame of director of photography Zach Kuperstein’s (The Eyes of My Mother) lusciously disquieting camerawork. He also gets a splendid performance out of Davis. Yakov’s multidimensional attempts to reconcile his own lapsed faith with all he sees and learns throughout the night is stunningly realized, and the actor’s emotional and physical dexterity in the role is superb.

I’m a little surprised how much The Vigil affected me. Thomas builds tension and suspense skillfully, especially during a spellbinding sequence near the climax, when Yakov finally learns what it is he’s up against and why it was originally drawn to Mrs. Litvak’s husband. There is a touching human dimension to this tale that brought tears to my eyes, the ghosts of past regrets and a refusal to allow grief-stricken wounds the time they need to heal being the real villain hungering to feast on damaged souls crying out in continuous pain. 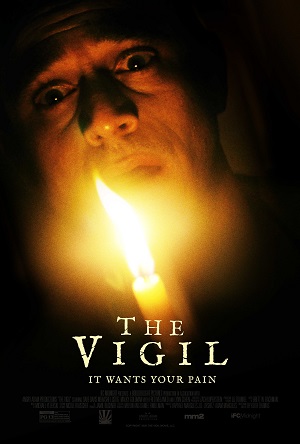