Iris (Paula Silva) is an overnight security guard for a sprawling athletic club located downtown in the Uruguayan capital of Montevideo. When her ex unexpectedly drops off their daughter Tata (Pilar Garcia) for the evening, she decides to take the child along to work, thinking the two of them will have fun spending quality time together in the empty complex.

Things take a horrifying turn when, unbeknownst to them, a deadly viral outbreak quickly overruns the city. It transforms people into bloodthirsty killers driven to destroy any life, no matter how small, unaffected by the disease. Each outburst of violence forces those infected with the virus into 32 short seconds of inactivity. After that, their rage builds once more into an unstoppable force, leading them to assault, maim, and kill again and again as if they were stuck on perpetual repeat.

Similarities to 28 Days Later… and that classic’s “rage virus” notwithstanding, Gustavo Hernández’s (The Silent House) latest shocker Virus: 32 is an effectively unsettling slice of bloody run-and-hide zombie horror that had me squirming in my seat. Terrifically shot in a series of increasingly creepy, creatively lit long takes by cinematographer Fermin Torres and energetically edited by Guille Gatti, this is a kinetically invigorating genre entry perfect for late-night viewing where grabbing the arm of a friend or a loved one during a moment of unanticipated fright is all part of the fun.

To I’m sure no one’s shock, Iris and Tata become separated inside the sports complex just as small bands of the infected break their way in. The increasingly frazzled mother – initially presented as a selfish incompetent only for her tragic backstory to reveal the reality as being far more complex – is forced to search for her daughter in the massive facility with power flickering in and out, dodging zombies as she does so. Iris also runs into the eerily calm, singularly determined Luis (Daniel Hendler), and he agrees to help her search for Tata if she’ll assist him with a task of his own first.

There’s not much more to it, and things mostly work out exactly as anticipated. But Hernández does an exceptional job of crafting an omnipresent sense of dread that the weight of it all is suitably bone-crushing. He is also ably assisted by both Silva and Hendler, the pair delivering surprisingly multifaceted performances that help give the overly familiar material an extra ounce of character-driven resonance.

The initial zombie attack on Iris is outstanding, and I love that the director does a thorough job of showcasing the layout of the athletic club so that by the time the young woman is in a full-on sprint for her life I still had no problem figuring out where she was and which way she needed to go to escape. There’s also a nice bit of technical foreshadowing that allows mother and daughter to reconnect even though they’re not face-to-face during a critical moment, everything leading to an impromptu game of hide-and-seek that’s integral to their survival.

I wish the trick regarding the 32-second pause after violence for the zombies was utilized with a bit more creativity, and a set piece in an empty pool Iris utilizing a handful of colorful smoke bombs starts well but concludes with an anticlimactic fizzle. I’m also not altogether certain the subplot involving Luis works, and it is only because of the strength of veteran character actor Hendler’s performance I’m willing to give this aspect some slack.

But there’s ample tension throughout, and the last ten minutes are especially effective. Hernández is a master at taking a familiar premise and making it his own, and while there’s not a lot that’s new going on, I still had a solid emotional investment in seeing how things were going to turn out. Virus: 32 builds to an engagingly unnerving climax that had me sitting on the edge of my seat, and not even a silly denouement hinting at a potential sequel derailed my overall enjoyment of the film one iota. 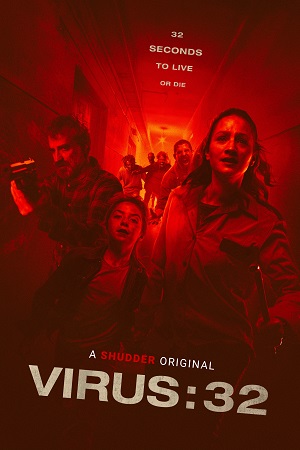