Thrilling Whistlers an Empathetic Tale of Crime and Romance

Veteran Bucharest police inspector Cristi (Vlad Ivanov) is playing a dangerous game. Is he in league with the mysteriously sensual Gilda (Catrinel Marlon), a secretive siren who is trying to lure him into taking part in a dangerous heist? Or is he an undercover mole for fiery and intelligent prosecutor Magda (Rodica Lazar), only pretending to be bent so he can bring down the mafia kingpin Paco (Agustí Villaronga) whom Gilda surreptitiously works for?

The truth lies somewhere in-between in writer/director Corneliu Porumboiu’s (Police, Adjective) fascinating, multi-layered thriller The Whistlers (La Gomera). Told in a series of quick, individually character-focused chapters, the filmmaker spins a complex web of intrigue where almost no one can be trusted and the truth is a vague question mark never to be fully understood. It is a film where violence is a constant threat that once unleashed cannot be stopped, and even doing heinous wrong for what appears to be the most selflessly valiant of reasons can still lead to heartbreaking tragedy.

Porumboiu presents his latest feature in a series of somewhat nonlinear vignettes focused on many of the story’s central characters. While the majority of the running time is unsurprisingly spent on Cristi and Gilda, all of the secondary figures responsible for what is happening all get their moment to sit in the center of the spotlight. It’s an intriguing narrative conceit, and one that the director utilizes with tremendous confidence and skill, and there was never a moment where I felt Porumboiu was in anything less than complete control of the material.

This admittedly does produce something a discombobulating uncertainty that did leave me a little frustrated at times. There is a suddenness to some of the transitions that are jarring, and as such the inherent shifts in tone that happen because of this are difficult to ignore. It’s easy to get a little lost, and while the aura of uncertainty that shrouds the entire picture is intended, I still felt it took a bit more effort than necessary to put all the pieces together once the film had concluded.

Not that I could take my eyes off the screen. This is a frequently riveting character study, and Ivanov, Marlon and especially Lazar (Magda’s arc thankfully caught me by surprise) are all superb. There are also a couple of magnificently tense set pieces, notably one near the end where both the collective plans of the criminals and the cops go spectacularly off the rails. The film is kinetically shot by cinematographer Tudor Mircea, the whole thing having a procedural-like feel that fits the proceedings nicely.

It all builds to a climactic series of moments and images that are intimately haunting in their quiet grace. Porumboiu has been slowly and subtly building several internalized empathetic themes that only fully blossom right at the end. It’s an astonishing bit of control on the director’s part, and I was stunned by just how expansive the emotions he pulled out of me ended up being. The final cry The Whistlers makes is one of forgiveness and grace, the unspoken connective pull of human understanding impossible to resist. 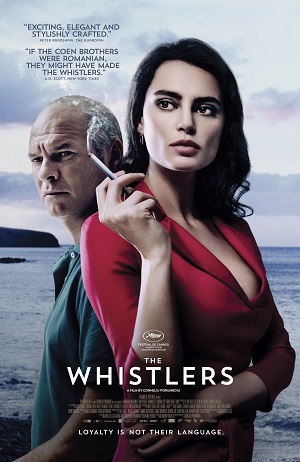