It’s taken a few years, but with Wyrmwood: Apocalypse brothers Kiah and Tristan Roache-Turner have finally returned to the zombiefied Australian wasteland of their rambunctious 2014 cult-favorite Wyrmwood: Road of the Dead. While not nearly as fresh as its predecessor, this second helping of blood-splattered dystopian craziness is still a decent bit of fun. I had a terrific time revisiting this cartoonish Outback wasteland, where the Roache-Turners deliver high-octane undead antics that kept me happily satisfied.

The storytelling can be a little slapdash, especially during the oddly chaotic opening third. While not picking things up directly after the events of the first film, the sequel still drops the viewer right in the middle of a melee involving returning survivors Barry (Jay Gallagher) and his flesh-eating hybrid sister Brooke (Bianca Bradey) — she can control zombies with her mind — taking out a small squad of soldiers. The duo has also teamed up with indigenous siblings Maxi (Shantae Barnes-Cowan) and Grace (Tasia Zalar), and after the fracas comes to a gruesome conclusion, the two young women strongly consider putting an end to their partnership.

But that’s not the main plot. After the opening title drop, the narrative shifts gears to focus on Rhys (Luke McKenzie), the twin brother of the brutal Captain who helped make Brooke the telekinetic half-human, half-zombie she is today and a soldier working for the mysterious Surgeon General (Nicholas Boshier). He’s been rounding up survivors and delivering them to this scientist in his underground bunker under the impression they’re being protected and are helping the doctor find a cure for the zombie outbreak.

Not that this will come as a shock to anyone, but Rhys is wrong about all of that. Through a series of crazy events that I’m not about to spoil, the soldier ends up teaming with Maxi to save her sister Grace from the clutches of the Surgeon General and his maniacal machinations. Additionally, he runs smack-dab into Barry and Brooke, the pair who killed his brother, and is forced to reconcile his thirst for vengeance with the knowledge that they may be the only thing standing between humanity’s continued survival and outright extinction.

What I like about Kiah Roache-Turner as a director is that he’s clearly studied at the George Miller school of “how to shoot action.” Not to say he’s in the same class as the Mad Max and The Witches of Eastwick Oscar winner, but as imitators go, the guy has done his homework. I get the sense that he is growing increasingly confident behind the camera with each new project. There is a crisp fluidity to all of the big set pieces, and I love that he manages to bring a sensation of a constant state of motion in a way that does not feel overly frenzied or visually incoherent.

The mixture of comedy, horror, and action was stronger in Road of the Dead, though. A lot of that had to do with the presence of Leon Burchill, who was terrific, and he’s sadly missed this time around. This leaves it to Boshier to do all the truly zany stuff, and the actor is certainly game to go into Peter Sellers-meets-Marx Brothers-meets-Bruce Campbell territory whenever the director allows him to. But he’s almost too over the top, his goofy antics frequently taking me out of the story instead of adding to the film’s overall effectiveness.

On the positive side of the ledger are McKenzie and Barnes-Cowan. They do a fine job, and I liked how their performances immediately feel lived-in and multidimensional even when the script from the Roache-Turner siblings works in comic book shorthand and doesn’t spend much time fleshing out either Rhys or Maxi in a fashion that isn’t immediately obvious. It’s an interesting and daring thing to make your two primary newcomers the stars of an already established franchise, but McKenzie and Barnes-Cowan are up to the challenge, and if the Wyrmwood saga gets a concluding chapter, I’m all for seeing more of the both of them.

At a brisk 88 minutes, there’s not much depth to any of this, and there are moments where events brazenly tread into terrain Paul W.S. Anderson covered many times over during his six-film Resident Evil franchise. But the Roache-Turners still put their personal stamp on things, and there is an old-school, renegade Aussie spirit running through Wyrmwood: Apocalypse that’s reminiscent of the Ozploitation heyday of the 1970s and ‘80s. Give this one a look. 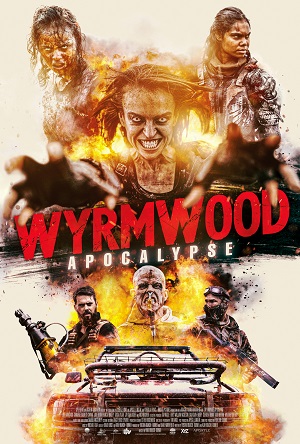