Hypnotic Ad Astra an Emotional Moonshot of Catharsis and Fury

Astronaut Maj. Roy McBride (Brad Pitt) is the son of a bona fide hero, deep space pioneer H. Clifford McBride (Tommy Lee Jones). He was the commander of the ill-fated Lima Project, an attempt to head out to the furthest reaches of our solar system to probe the Universe for intelligent life other than human. But he and his crew disappeared 16 years ago near Neptune, and the only information the Earth learned about their mission was in large part thanks to the selfless actions of Clifford McBride.

Or so the story goes. After a massive energy surge emanating from the Lima Project’s last known coordinates decimates electronic devices, large, small, and in-between, all over the planet, government and military officials let Roy in on a well-kept secret: they’re not positive his father is dead. They think his ship is causing these deep space surges, and if they’re not stopped all life on Earth could be put in lethal jeopardy. Officials want the Major to head to the U.S. base on Mars and send his father a personal message, understanding they’ll be able to track his exact location if he responds. But Roy soon begins to believe there is more going on than what he’s being briefed about, and one way or another he is going to learn the truth, even if he has to travel all the way to Neptune himself to do so.

If you’re a fan of writer/director James Gray, I cannot imagine in a million years that you would believe that the acclaimed filmmaker’s science fiction spectacle Ad Astra is anywhere near as straightforward as that synopsis makes things sound. The Two Lovers, The Immigrant, We Own the Night and The Lost City of Z auteur has delivered a complex, thoughtfully minimalistic interstellar saga of family, fatherhood, responsibility, grief, courage, sorrow and forgiveness that is as emotionally ethereal as it is affectingly introspective. While not without its thrills, this is nonetheless heady stuff that almost couldn’t care less if the viewer is visibly excited by any of the impressively mounted action set pieces which take place up on the screen. Instead, Gray is aiming a lot higher, his heady mission into deep space piercing both the heart and the psyche in almost equal measure.

Am I sure it all works? No. I am not. Some of the passages are so minimalist they’re close to invisible. After traveling to Mars and sending the message to his father, Roy finds himself squashed by military and political subterfuge only to find an unexpected ally in the base’s commander, Helen Lantos (Ruth Negga). But the reasons for their partnership are almost too convenient, too coincidental, and considering Gray’s personal style is to let audiences piece things together for themselves with little extra in the way of assistance on his part, I just never fully believed the tidiness of their relationship. Additionally, Roy’s whole mission is just too ominous and vital for it to be conducted with such slapdash disdain for his welfare, and I couldn’t help but think there were better ways for the powers that be to keep things top secret while also ensuring the most vital component of their plan didn’t inadvertently get his brains blown out traveling across the lunar landscape of the Moon.

All of that said, Gray is such an exquisite cinematic craftsman it’s unlikely I could have torn my eyes away from the screen even if I had wanted to try and do so. An opening sequence depicting the repercussions of the first energy surge, leading directly to a massive orbital freefall on Roy’s part, is jaw-dropping in its intensity, as is an emergency landing sequence on Mars where the Major is forced to take command of a spaceship even though he knows doing so could have unexpected repercussions relating to his primary mission. A moon buggy chase sequence and firefight is magnificently staged, while the brutally cathartic silence of the film’s final act had me sitting on the edge of my seat in rapt attention even as my eyes welled up with tears thanks to the gallantly pure authenticity of the emotions being presented for me to soak up and feel.

Gray’s script, written with Ethan Gross, is like a broodingly sincere outer space mashup of Solaris, Apocalypse Now, The Mosquito Coast, The Searchers, First Man and Mutiny on the Bounty. Roy’s journey becomes one more of self-exploration than anything else, and it is an open question if by the time he reaches his final destination he’ll instantly destroy whatever (or whomever) he finds instead of trying to understand what is that’s going on and why it is his father abandoned him and his mother 16 years ago to go on this apparently one-way mission. In the process of all of this Pitt, already on something of a career high after Once Upon a Time in…Hollywood, delivers one of the finest performances of his career, his work ranking right up there with his turns in Moneyball, The Tree of Life, 12 Monkeys, Killing Them Softly and The Assassination of Jesse James by the Coward Robert Ford rather splendidly.

While I am fascinated by, and undeniably enjoyed, Gray’s movie quite a bit, several vexing annoyances still gnaw away at me, most of which I’ve already mentioned. I think in some ways I’m most annoyed by how he does nothing with Liv Tyler, and if I’m going to watch a sci-fi adventure where she’s forced to be earthbound pining away for her loved ones hurtling through the unknown terrors of Space I’d probably choose Michael Bay’s Armageddon instead of this. While that’s overstating things considerably the talented actress is still wasted in a rather thankless role, and while I understand why her part is structured as it is that doesn’t mitigate my dissatisfaction with how she was being utilized.

Honestly, though, who am I kidding? Gray is just far too talented for me to get too angry about any of that. With Ad Astra, I find I can’t stop thinking about the film. I keep pondering many of its various nooks and crannies with almost unwavering intensity, and part of me can’t wait to get a closer look so I can better dissect all it is the filmmaker is attempting to do. This is science fiction that refuses to take the easy way out or to bow to traditional genre convention even when the opportunity to do just that conveniently presents itself. This is a daring bit of storytelling subterfuge that will only grow in resonance as time goes by, the final pieces of its complicated puzzle an emotional moonshot of catharsis and fury unlike anything I could have imagined trying to fit together beforehand. 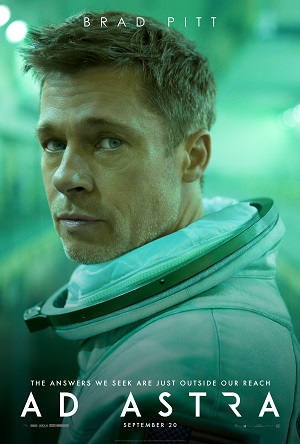