A strange species of interstellar visitors – which in the future will become known as Predators – come to Earth thousands of years ago and teach ancient civilizations how to build complex structures such as pyramids and are revered as Gods. They also bring a serpent-like race of aliens that have concentrated acid for blood and only live to become the dominant life form on whichever planet they are brought to.

The first is the perfect hunter: Cunning, lethal, and master of all types of weaponry. The latter is the perfect killing machine: Instinctive, vicious, hive-like, and able to quickly adapt to any survival situation. When brought together the two species cannot help but wage war; one for survival, the other for the sport.

For centuries, the human race has been caught smack dab in the middle. Until now.

Okay. I’ll buy it. Why not? It’s as good an idea as any as to how ancient civilizations built their pyramids. Besides, in a silly, over-the-top, B-movie way, it’s actually kind of a terrifically goofy premise to build a face-off between two iconic sci-fi killers. If King Kong can battle Godzilla, and Frankenstein and the Wolf Man can come to blows, then I guess this works, too.

But does the imaginative Alien series need to be turned into a tongue-in-cheek battle royale? I don’t really mind making a joke out of Predator, the 1987 original is the only good film as it is, but the former series is magnificent. Each of the four entries – Alien 3 and Alien Resurrection’s noticeable flaws notwithstanding – introduced just as many visionary filmmakers to a wider audience (Ridley Scott, James Cameron, David Fincher, Jean-Pierre Jeunet), each director adding their distinctive voice to a mythology that only grows in powerful resonance as time goes on.

Yet here we have Resident Evil director Paul W. S. Anderson’s Alien vs. Predator whether we wanted it or not. Thankfully, it is perfectly amusing in a juvenile sort of way. I somewhat surprisingly had a good time watching events play out. Still, it’s a tad disconcerting to see the Alien series reduced to a rock’em, sock’em video game. Not going to lie as far as that goes.

It’s a pretty good game. Anderson sets this monster mash in an underground arctic pyramid that’s one part Rubix Cube, one part rat maze, and all sideshow carnival House of Horrors. Using a mix of familiar faces (Lance Henriksen from Aliens and Alien 3) and talented newcomers (Sanaa Lathan from Out of Time, Raoul Bova of Under the Tuscan Sun, and Trainspotting star Ewan Bremmer), Anderson gives his audience interesting human characters to spend their time with. Additionally, it is as if the director has gone through both series (including their comic book adaptations) with a fine-tooth comb, including every bit of lore, mythology, weapon, and creature trait he can stuff into the movie’s brief 100-minute running time.

Not altogether shocking, this is an unreviewable motion picture. Alien vs. Predator is full of logically-impaired characters who are introduced as being the best in each of their chosen scientific fields doing increasingly stupid things as events spiral increasingly out of control. But just as long as Anderson delivers the expected power punches, double-jaw bites, and acid-drenched disembowelments all of that is sort of forgivable in an alternate universe sort of way. If the audience is cheering, it’s doubtful they’ll notice how inane the plot is.

And Anderson does deliver. At about the midway point there’s a mano-y-mano Alien/Predator smackdown that’s definitely worth the wait. Later during the climax, Lathan and one of the Predators join forces (this is not a spoiler) to battle a massive Alien Queen, and it’s preposterously glorious. These sequences are viscerally thrilling, delivering a combination of action, suspense, and humor that had me frequently glued to my seat.

Some missteps are difficult to overlook. In trying to compress everything into such a short timeframe, full-grown Aliens spring forth practically immediately from within their human hosts, while Predators indiscriminately kill or spare their human guinea pigs with virtually no rhyme or reason. It is as if the rules for both species laid down in each of their respective series of films was not important. This annoyed me.

Honestly, though, you either buy into this wacky world of monster versus monster nonsense or you don’t. Besides, on a technical front, a lot of this is aces. Richard Bridgland‘s (Richard III) production design is extraordinary, as are the astonishing visual effects work from Oscar-winner John Bruno (The Abyss) and creature effects by Aliens, Alien 3, and Alien: Resurrection veterans Alec Gillis and Tom Woodruff, Jr. Best of all, Lathan is a superior action heroine, her character deserving a better film to strut her stuff in.

Whatever. When it comes to a picture as pre-sold and pre-packaged as this one is, you either go to the theater opening weekend or stay as far away from this type of mashup as humanly possible. While I predict the box office returns will be relatively robust, it’s not like Alien vs. Predator is essential viewing. 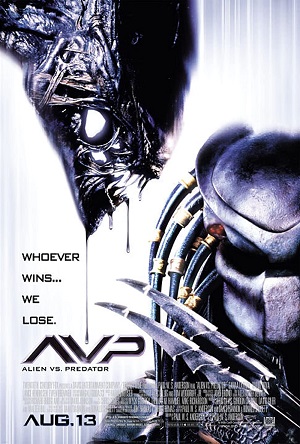