Peter Parker (Andrew Garfield) has a pretty good handle on being Spider-Man. Stop a plutonium robbery in the morning and still make it to his High School graduation by lunchtime? Check. Sell photos of the wall-crawler to the Daily Bugle while professing total ignorance to this closet to him that he actually knows the guy? Got it down to a science. All the same, his relationship with sweetheart Gwen (Emma Stone) isn’t as strong as it used to be, visions of her dead father Captain Stacy (Dennis Leary) reminding him of a promise he made to the man on his deathbed, a promise he’s been breaking nearly every day since. 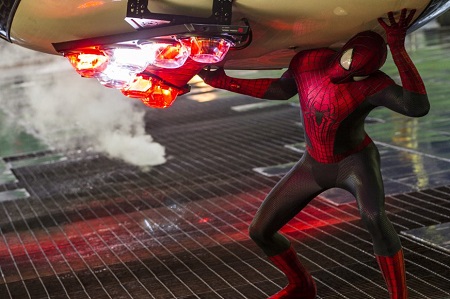 Not that he has a lot of time to ponder his options as far as that is concerned. Old friend Harry Osborn (Dane DeHaan) has returned to New York City, taking over the running of Oscorp after the death of his father Norman (Chris Cooper). He’s afflicted with the same genetic disorder his old man ultimately succumbed to and he believes the secret to curing his ailment is hidden within the genetic coding of a certain friendly neighborhood superhero he thinks Peter can procure a sample from. But he’s understandably reticent to hand something like that over, knowing the potential for calamity that might arise with doing so too monumental to ignore.

If this were the only story The Amazing Spider-Man 2 was interested in telling than potentially returning director Marc Webb ((500) Days of Summer) and his cadre of storytellers (four are credited, including Star Trek and Transformers scribes Alex Kurtzman and Roberto Orci) might have crafted something worthwhile. But that doesn’t happen, the team overstuffing their 142-minute opus to the point none of the plot tangents matter and opportunities for emotional connections are obliterated long before they have a chance to compose themselves. Add in some of the worst dialogue this side of a Star Wars prequel, some distracting visual effects making things look like a late-1990’s Pixar cartoon and a main villain who’s so laughably nondescript he’s practically nonexistent, the sequel is an oddly unappealing mess that buries its strengths while highlighting its weaknesses. It’s bad, plain and simple, even the things I like about it not masking that simple, unfortunate truth one little bit.

Say what you will about the Sam Raimi directed trilogy, but he knew how to maintain focus. More than that, he also knew how to develop plot tangents and character relationships over time, making the friendship between Peter and Harry mean something. That meant when things eventually fell apart, and fall apart they must, the viewer could experience that pain alongside them, the line between right and wrong, truth and justice, suitably ephemeral, their collective plights having emotional weight and heft they otherwise wouldn’t have known.

But if you thought Spider-Man 3 was brimming with too many villains and subplots wait until you get a load of what Webb and company have come up with here. Not only do we have a surreal, The Dark Knight Rises-esque opening sequences with Peter’s parents (Campbell Scott, Embeth Davidtz) on a plane, we’ve also got the emergence of a supervillain calling himself Electro (Jamie Foxx) who starts off as Spidey’s biggest fan only to instantly morph into his most fearsome enemy. Throw in some side issue of Gwen going to study at Oxford coupled with Aunt May (Sally Field) becoming a nurse and you suddenly have enough material for six adventures, let alone one, and because of that none of it is developed and even less matters that’s even passingly memorable.

The crazy thing is that the elements that worked well in The Amazing Spider-Man still work here. Heck, if anything, they’re even better. Garfield and Stone are magnetic, the pair generating sparks even when they’re just speaking to one another over a phone. Additionally, Webb’s confidence as far as staging action scenes has improved substantially, an early showcase with our hero battling various Russian mobsters (including an unintelligibly belligerent Paul Giamatti) suitably spectacular. The initial battle with Electro in Times Square is also excellent, the director doing a fine job of setting the scene making the resulting chaos and mayhem crackle with excitement. There’s even an air of tragedy hovering over the climax that’s more affecting than I thought it would be, making a heroic resurrection moderately more successful than it otherwise would have been.

And yet, the film as a whole is still nothing short of a disaster. Harry is an insufferable prig right from the get-go, the talented DeHaan unable to do anything to change that. As for Electro, his motivations might be more plausible than the villain’s in the last episode were (no one is trying to change an entire city into lizards) but that doesn’t make them any less absurd. He desires to stomp Spider-Man under his foot are vague at best. More than that, he’s just not interesting, and while Foxx does what he can there’s just not enough complexity to make his transformation from disgruntled, overlooked tech wiz into an electromagnetic force of evil matter in the ways it potentially could have.

That’s what The Amazing Spider-Man 2 does best, waste inherent potential. It’s got a great actor as the main character; does almost nothing with him. Has a wonderful actress as the female lead; gives her embarrassingly little to do. Casts two great stars – one up and coming, the other a bona fide Oscar-winner – as the bad guys; gives them precious little of substance to do. Little works and even less matters, even the attempt at world-building in hopes of giving things a grandiosity on the scale of The Avengers failing to be intriguingly developed, the final portions crashing to earth with a resounding thud that echoed throughout the theater. As already stated, this is a bad movie, and as summer’s initial tentpole out of the gate it gets the ignominious tag of also being its first, and potentially biggest, disappointment. 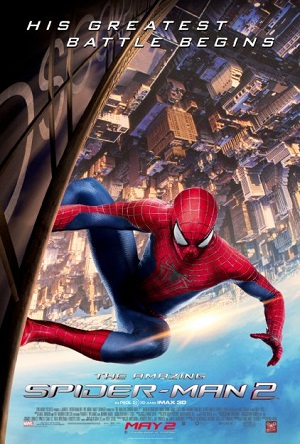