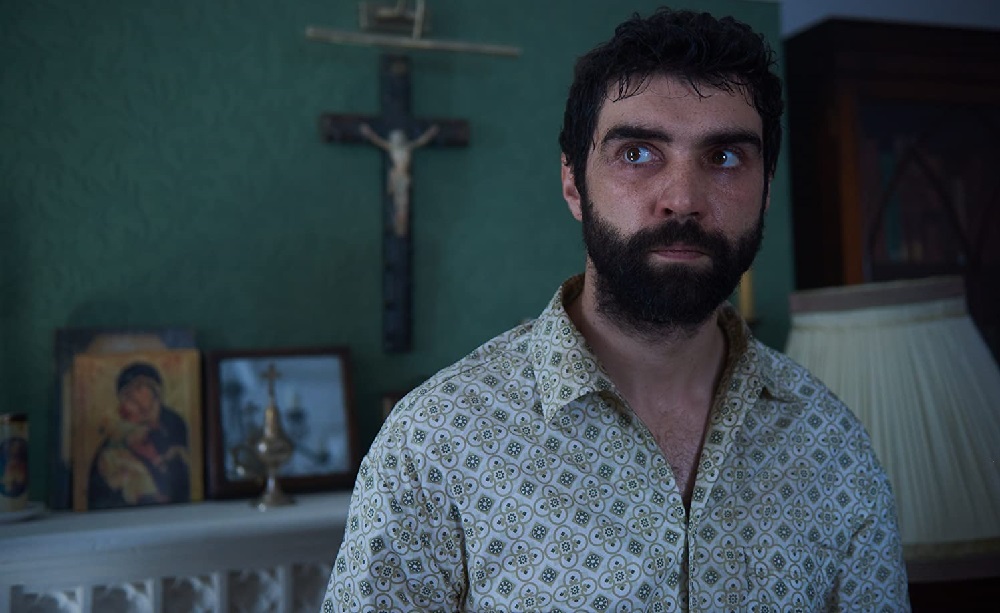 Demons exist in writer/director Romola Garai’s metaphorically intricate horror tale Amulet. Whether they be supernaturally literate, intimately figurative or a terrifying combination of the two the central mystery former soldier-turned-handyman Tomaz (Alec Secareanu) takes it upon himself to solve. This is a distinctly feminist journey where answers only reveal additional questions, and doing the so-called “right thing” could lead to ghastly unforeseen events born of entitled selfishness that are both heinous and unforgivable all at the same time.

Or are they? This is one of the central quagmires that Tomaz is attempting to navigate, and it comes as no surprise that he isn’t going to be entirely successful. But will he learn? Will he do the right thing for selfless reasons and not unintentionally selfish ones? Can he admit past mistakes and ask for forgiveness whether or not he deserves it? Will he understand the horrors he is experiencing are thanks to actions he himself may be entirely responsible for?

Garai asks her questions inside the confines of a relatively self-contained psychological scenario where the majority of the drama takes place in one centralized location, a dilapidated London house Tomaz is recruited to become the caretaker of by worldly nun Sister Claire (Imelda Staunton). She believes he’s perfect for the job, certain he can also assist its primary resident Magda (Carla Juri) in her daily chores. She is taking care of her deathly ill mother who secretly resides upstairs behind a locked door, and Tomaz is understandably curious to know what is ailing her and why her daughter seems so willing to put up with the old woman’s smothering demands.

The story mixes in several intriguing elements reminiscent of films as diverse as Kill List, The Exorcist, Repulsion, Kuroneko and Possession. Shifting gears and genres skillfully, Garai methodically paces things with hypnotic attention to detail. Cinematographer Laura Bellingham’s camera glides through the interiors of the house with an unnerving grace that helps set an ominously smothering mood that builds in weight and meaning as events progress.

The focus is centered on Tomaz, hints as to who this man is, the ghosts that haunt him and the ways he believes his prior actions were both justified yet can also be forgiven, potentially even redeemed, present throughout. Flashbacks to his being stationed at a lonely roadside forest outpost during a nameless war add additional insight into what led him to be sought out by Sister Claire, each of these scenes adding a layer of dread that’s unnerving.

Garai incisively dissects concepts involving cycles of abuse, male entitlement and female disempowerment in the context of an otherwise by-the-book example of cerebral existential horror. By the time the supernatural elements are no longer a question mark, these decidedly everyday human aspects have taken such hold on the proceedings the spooky demonic stuff almost feels par for the course. They fit comfortably inside this destructive emotional maelstrom, the choices Tomaz makes to address new problems as they arise the key to whether or not he and Magda are going to overcome the dangers which are attempting to ravage their immortal souls.

Even though she’s got limited screen time Staunton almost walks away with the movie. Her sly, complicatedly charming performance fits right into the morally dubious aesthetic that Garai and her technical team so confidently create. That Sister Claire is both more and less than what she appears to be isn’t much of a shock. Staunton is in complete control in every scene she’s a part of, the calm, forceful intensity she exudes right up until the end marvelous.

Both Secareanu and Juri are also very good, but I find I don’t want to talk too much about what either actor does here as I don’t want to potentially ruin any of the more inventive twists or turns that involve their respective characters. I will say each goes through an incredible transformation, his frequently bone-chilling while hers is something altogether unexpected, at times even playful. Their chemistry has a refined fluidity that’s intoxicating, the balance of power between them shifting with such sudden regularity the effect it had upon me was suitably discombobulating.

Garai can get a little heavy-handed in the exploration of her various themes, some of the climactic revelations too ephemerally connected to Tomaz’s days as a soldier to pack the sort of wallop I imagine was the intent. But the director casts the type of spell that leaves lasting scars, and it’s clear the actor-turned-director knows how to get the best out of every member of her cast. Amulet left quite an impression upon me, and it’s one I’m not soon to forget. 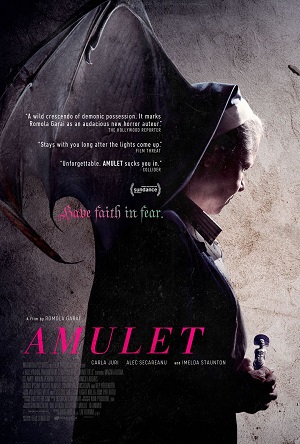