Even had Black Widow, Marvel’s latest entry in its cinematic universe (MCU), come out as scheduled in May of last year, this adventure centered on Natasha Romanoff (Scarlett Johansson), the Avengers’ heroic assassin with a dark past, would still feel egregiously late. At worst, this story, which picks up after the events of Captain America: Civil War, should have come out before 2018’s Avengers: Infinity War, probably somewhere between Guardians of the Galaxy Vol. 2 and Black Panther.

But it’s here now, and unlike Steve Rogers, Tony Stark, and the rest of the gang, no one is going to perform a magical “time heist” to place this action-heavy conspiracy thriller from director Cate Shortland (Lore) earlier in the Marvel timeline. Even if Natasha deserved better — and I’m referring not just to the studio’s handling of her first and likely only solo adventure but also the character’s horribly idiotic fate in Avengers: Endgame — this is the film where she finally gets some respect, along with an opportunity to shine away from her far more powerful compatriots.

On the run from authorities, Natasha is shocked when she receives a package of vials containing strange red dust sent to her by Yelena Belova (Florence Pugh). The pair were raised as sisters by Alexei Shostakov (David Harbour) and Melina Vostokoff (Rachel Weisz), Russian spies on a secret mission in the United States supervised by the mysterious Dreykov (Ray Winstone). When the fake family was forced to flee after completing their mission, Natasha and Yelena were separated and sent to the Red Room, a secret training facility designed to turn them into assassins.

While Natasha escaped and became an Avenger, Yelena continued to work for Dreykov, and until recently was being utilized as a mindless drone, completing missions with zero empathy for anything or anyone that stood in her way. But the red dust freed her from his control. Now she wants to bring down the Red Room and make sure Dreykov can’t harm anyone ever again, and the only one she knows who can assist her in doing this is the one person she’s angriest at for leaving her behind and rebranding herself as a hero: Natasha.

There are elements in this film that are far darker those what we typically get in Marvel offerings, most notably a subplot dealing with how Natasha was able to get in S.H.I.E.L.D.’s good graces and the ghoulish adolescent collateral damage that was required on her part to make it happen. But even this facet is given a polished shimmer, especially as the film nears completion, and while I imagine some parents won’t be happy with having to explain a couple of very adult topics to their little ones, I seriously doubt any nightmares will be unintentionally generated.

I like how relatively low the stakes are. Even though there is a danger to the world at large if Dreykov goes unchallenged, essentially this is a simple, straightforward mission to bring down the Red Room and silence the man who controlled every aspect of Natasha’s and Yelena’s lives for far too long. Along the way, there is also a bit of family reunification, as Alexei and Melina are brought into the picture — they, too, appear to want to see Dreykov pay for his crimes.

It’s those familial moments where I felt the workmanlike screenplay by Eric Pearson (Godzilla vs. Kong), from a story by Jac Schaeffer (WandaVision) and Ned Benson (The Disappearance of Eleanor Rigby), came up a little short. As well cast as both Weisz and especially Harbour (who is clearly having a blast) might be, neither Melina and Alexei strongly register. They’re additional puzzle pieces that, when placed in the proper position, allow the mystery to make sense and not much more, and I can’t say I cared about either of them at any point.

But that’s not the issue that keeps me from wanting to fully embrace all that Black Widow has to offer. As this is part of a larger game plan, turns out Natasha isn’t the most interesting, or arguably even the main, character — and this is in a motion picture carrying her name. Yelena is the one with the most noteworthy arc. She’s the one who has all the most memorable moments. She has all of the best lines. This is her showcase, and it’s clear a choice was made to give her the most time in the spotlight.

Pugh does respond accordingly, however, and she’s outstanding. If she is going to be a part of the Marvel production line for a few years, her Yelena will have instantaneously become one of the more intriguing new characters the studio has so far introduced during this latest phase. There is a buoyant manic urgency to her performance that’s electrifying, and I’m understandably curious to learn what happens to the newbie hero next.

Shortland does a solid job with the material, but even she isn’t able to entirely gloss over how Natasha randomly keeps disappearing in her own movie or how what is supposed to be her story frequently focuses on other characters. I do like how the filmmaker doesn’t shy away from the darker corners of Pearson’s script, and an early set piece where Natasha and Yelena break Alexei out of a Siberian prison — complete with impromptu avalanche — is suitably spectacular.

Black Widow isn’t Marvel at its best, but it is still good enough to entertain. Maybe that’s enough. 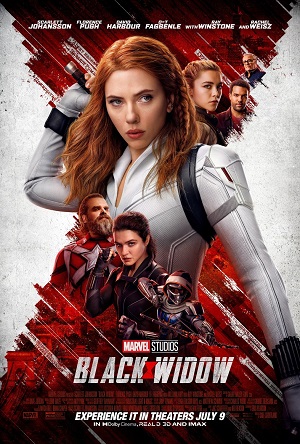