For those who thought there wasn’t enough kaiju action in 2014’s Godzilla or who felt the clashes between classic Toho favorites in 2019’s Godzilla: King of the Monsters was too shrouded in darkness, mist and rain to properly see what was going on, director Adam Wingard has made a Godzilla vs. Kong that addresses many of those issues. For everyone else who was happy with both of those movies (and more than likely also enjoyed 2017’s Kong: Skull Island), the You’re Next and The Guest filmmaker successfully delivers a knockout for them as well.

Don’t misunderstand. I’m not saying this quarrel between two of the screen’s most enduring and popular monsters is going to make my list of 2021’s best motion pictures. I’m not even going to say it’s my fave entry in Warner Bros’ so-called “MonsterVerse” (I still say that’s Gareth Edwards’ Godzilla). But as far as living up to the expectations teased in the title, Wingard’s battle royale of mythological cinematic beasties more than satisfies.

The plot as conceived by a quintet of writers (including Godzilla: King of the Monsters director Michael Dougherty) is a mashup of classic Toho scenarios involving nefarious human antagonists trying to mitigate the damage caused by Godzilla and his brethren by utilizing a combination of technological and biological advancements beyond their control. Kong is thrown into the mix as an “ancient adversary” to the big green lizard who also is the key to finding a mysterious source of untold power hiding in the unexplored depths of the Earth.

The key players are scientists Nathan Lind (Alexander Skarsgård) and Ilene Andrews (Rebecca Hall), both coerced by tech billionaire-philanthropist Walter Simmons (Demián Bichir) to use Kong to find that power source, and series returnee Madison Russell (Millie Bobby Brown). Along with her father Mark (Kyle Chandler), now a key member of Titan overseers MONARCH, she helped Godzilla and Mothra defeat King Ghidorah and Rodan in an epic smackdown that destroyed half of Boston.

They’re all running to and fro spouting a lot of gobbledygook about why what they’re doing is important. They’re also trying to figure out who or what is orchestrating this war between the two all-powerful Titans, and there’s not a lot more to it.

I’m okay with that. Each actor does just enough to make their presence worthwhile, especially Hall. Her relationship with Skull Island youngster Jia (Kaylee Hottle) is far more endearingly effective than it has any right to be. The child’s connection to Kong turns out to be this story’s heart and soul. It allows the ape to become a brotherly guardian worth rooting for, and his transformation to selfless action hero willing to lay his life on the line to protect those he loves is honestly quite touching.

The stuff involving Madison, her fast-talking best friend Josh Valentine (an amusingly goofy Julian Dennison) and podcasting whistleblower Bernie Hayes (Brian Tyree Henry) is not nearly as winning. It’s only because all three performers are so gosh darn likable that their entire subplot doesn’t become insufferable. A bit where they do make a startling discovery underneath the streets of Hong Kong, while not entirely surprising, is admittedly well done. I just felt their subplot was too overtly silly, and their presence in the city too cleverly coincidental as it pertained to the resolution of the climactic showdown.

But who am I kidding? Wingard loves Godzilla and Kong, and his reverence for each of them shows. He allows their battles to come to ferocious life, making certain that each encounter is a brutal brawl where every whack to the head is felt and each bite leaves a nasty scar. The director does a terrific job of showing how these two end up so evenly matched when on paper their bout should be a lopsided affair heavily titled towards Godzilla. He gives these Titans their due, Kong in particular, making them come alive as multidimensional characters and not just as massive monsters humans understandably run away in fear from whenever they’re around.

Wingard also throws in references to the likes of Die Hard and the Lethal Weapon series, as well as countless Showa-era Godzilla efforts, most specifically those from the 1960s and ’70s. Much like he did with The Guest, he’s also fearless with his use of color. The final battle in a neon-saturated Hong Kong is a thing of absolute beauty. Godzilla’s atomic fire has never looked more incredible, while Kong’s wielding of an ancient ax made by his simian forebearers is a stroke crystal-blue magnificence.

While I normally like Junkie XL (aka Tom Holkenborg) a lot (his compositions for Mad Max: Fury Road are superb), as far as the four MonsterVerse scores go, I can’t help but feel his comes up frustratingly short. I also think Eiza González, portraying Simmons’ duplicitous daughter Maya, is wasted in a nothing role. The script does her zero favors and leaves her precious little to play, making her entire appearance all-too-forgettable, which, considering the importance of Maya’s actions as they pertain to the overall proceedings, is egregiously annoying.

It’s still hard for me to hold any of that against Godzilla vs. Kong. Wingard puts the type of spectacle up on the screen worthy of the titular legends. Their face-off is a violently over-the-top slug-fest that lands the majority of its punches, and the ultimate victors are audiences who purchased a ring-side ticket to see these two warriors slug it out in the pursuit of apex predator supremacy. 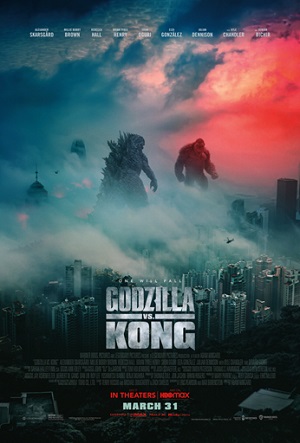