Five years after Godzilla defeated the MUTOs in San Francisco and reduced a sizable portion of the city to rubble, crypto-zoological agency Monarch is on the verge of being put under United States military control. But before that can happen, scientist Dr. Emma Russell (Vera Farmiga) and her teenage daughter Madison (Millie Bobby Brown) have been kidnapped by the unscrupulous Jonah Alan (Charles Dance) and his band of mercenaries. Their goal is to awaken the god-like monsters, dubbed Titans, Monarch has been studying around the globe from their slumber, believing that the destruction and carnage these creatures leave in their wake will help the Earth heal from centuries of misuse on the part of the human race. But their list includes the mysterious Monster Zero, also known as Ghidorah, a three-headed behemoth who may not be of this world, and instead of restoring the natural balance this vicious beast’s goal might just be the complete eradication of all of humanity.

Monarch scientist Dr. Ishiro Serizawa (Ken Watanabe) enlists Dr. Russell’s estranged ex-husband Mark (Kyle Chandler) to assist him in the search for the kidnapped mother and daughter. He understands her work better than anyone, so the feeling of Dr. Serizawa and his trusted fellow scientist Dr. Vivienne Graham (Sally Hawkins) is that he is their best option to stop to Alan from awakening these Titans. But his resolute hatred of Godzilla, potentially the only creature capable of destroying Ghidorah, could prove to be a catastrophic roadblock for the Monarch team, Mark blaming the kingly creature for the death of his son in San Francisco five years prior.

I thoroughly enjoyed director Michael Dougherty’s Godzilla: King of the Monsters. It made me smile. That does not mean I think it is as memorably great as Gareth Edwards’ 2014 hit Godzilla which birthed this so-called “Monsterverse” for Warner Bros, or that it is as giddily enjoyable as Jordan Vogt-Roberts’ 2017 adventure Kong: Skull Island proved to be. It also cannot hold a candle to Ishirô Honda’s 1954 Japanese classic that started this giant monster craze 65 years ago, that magnificent motion picture standing the test of time something fierce.

But Dougherty, the mind behind inventive low budget horror gems Krampus and Trick ‘r Treat, has an obvious affinity for the Toho Studios creatures, and not just the titular star. Along with Ghidorah both the usually benevolent Mothra and the fiery Rodan are also utilized here, the director showcasing all four in action with consummate skill. Rodan’s entrance is particularly fantastic, the pterodactyl-like monster birthed from inside a Mexican volcano and subsequently proceeds to lay waste to an entire village with blistering fury before finding itself in conflict with both Godzilla and Ghidorah out in the middle of the ocean. It’s a stunning sequence, one that is delivered in true late 1980s, early 1990s Toho Godzilla sequel splendor, the unabashed silliness of their clash juxtaposed with devastating respect for the might and muscle of the creatures that’s suitably incredible.

At the same time, also much like many of those Japanese epics from the tail end of the 20th century, the human component of this story grows increasingly asinine as events progress. Co-writing the script with Krampus collaborator Zach Shields and working from a story the pair dreamt up with Godzilla and Kong: Skull Island scribe Max Borenstein, Dougherty’s screenplay is unquestionably stupid. Alan’s plan never makes much sense, and his indifference when he realizes that Ghidorah isn’t part of the natural order but instead an alien invader intent on domination is demonstrably absurd. As for Dr. Emma Russell, her motivational flip-flops are impossible to keep track of let alone understand, making it difficult to care whether or not she is going to be reconciled with Mark let alone invest emotionally when she’s inevitably forced into a fight for her own survival.

It’s also a tad strange just how quickly Monarch has developed as a scientific defense force in the span of five years. The organization has essentially become the Monsterverse’s version of Marvel’s S.H.I.E.L.D., complete with secret underwater headquarters where they’re able to monitor Godzilla’s movements and a huge flying fortress that allows them to zip around the planet in no time flat. Granted, there’s a similar agency in the latter Toho Godzilla films, so the fact Monarch morphs into the Earth Defense Force (given that name in Godzilla: Final Wars) or the Global Defense Force (as called in Godzilla: Unleashed) isn’t a big surprise. It’s just the speed in which they suddenly have all of this technology and equipment available to them that’s hard to buy, especially considering there’s a major plot point regarding the U.S. government wanting to put them under the control of the Pentagon meaning they’re not a military organization.

Still, there are sequences of such staggering beauty, not the least of which is a journey to Godzilla’s underwater layer where Dr. Serizawa gets a heartfelt close encounter or the birth of Mothra from her cocoon beneath a Central American waterfall, and I really loved how much Dougherty appreciated the size and scale of the various monsters. I found the climactic showdown in Boston to be well worth the wait, and while I’d rather we stop staging these clashes shrouded in darkness and sheathed in rain, that doesn’t mean I could take my eyes off the screen for a single second of the Ghidorah-Godzilla smackdown.

It’s likely I was as close to being in-the-bag for this sequel as anything I’ll see and review this summer and I feel I need to admit that. I adore Dougherty’s previous films. As already stated, I love the most recent Godzilla and had a heck of a good time watching Kong: Skull Island. Most importantly, I’m as devoted to the Japanese Godzilla pictures as anyone, and while I’d never say I’ve liked all of them, even the ones I don’t particularly care for I’d watch again at the drop of the hat if the opportunity to do so were to arise. Heck, composer Bear McCreary (Backcountry) even manages to work in Yûji Koseki’s “Mothra’s Song” and Akira Ifukube’s iconic original Godzilla theme into his magnificent score, and it’s quite possible I might have shed a silent tear the first time the latter’s thunderous refrains splashed upon the soundtrack.

None of which means that I think Godzilla: King of the Monsters is perfect or that everyone will enjoy it near as much as I did. It does have flaws, and its missteps are egregiously obvious. But I was able to look past most of those as I let the joy of seeing Mothra and Rodan soar through the sky in mortal combat and the euphoria of Ghidorah and Godzilla locked in a lethal embrace sweep over me in continuous waves. I had a blast watching Dougherty’s take on these legendary creatures, and it goes without saying I’ll be heading to the theatre again to see this sequel for a second time relatively soon. 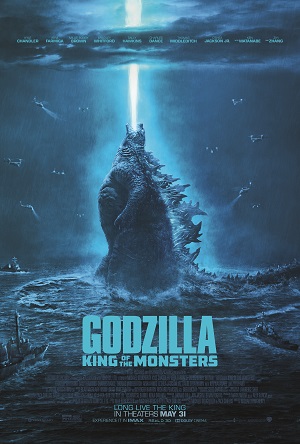