Los Angeles artist Dezzy Donahue (Dora Madison), on deadline to deliver her most adventurous and ambitious piece, is suddenly faced with some of the worst creative blockage of her entire career. With rent due, the client running out of patience and her agent ready to dump her, Dezzy heads out into the night looking for inspiration. Even though she’s been clean for some time now, she meets up with her former dealer and friend Hadrian (Graham Skipper) looking for a fix. After that, it’s off to the local nightclubs where she ends up meeting up with free-spirited wild-child Courtney (Tru Collins), the two women descending into an evening of debauchery and carnal craziness so extreme Dezzy can’t remember a single solitary second of it the following morning.

Wildly hungover, feeling a form of withdrawal she’s never experienced before, Dezzy is nonetheless astonished at what she accomplished during the night. Her latest consignment piece is easily a third of the way completed, it’s ominous portrait of something dazzlingly repugnant an exorbitant feast for the senses. But this hunger growing insider of her is beginning to worry the young artist, Dezzy starting to think Courtney did something to her during the night. Making matters worse she’s beginning to long for the taste of blood something fierce, her murderous desires maybe the only thing that will allow her to finish a painting that is very likely a bona fide masterpiece.

Joe Begos isn’t a subtle filmmaker. As both Almost Human and The Mind’s Eye more than showcased, he’s an energetic genre craftsman who is absolutely unafraid to drench the screen in gore. Begos appears to adore ’80s-style practical effects and utilizes them with utmost confidence, unleashing gruesome images of carnage and chaos that would make the likes of Carpenter, Cronenberg, Romero and Fulci proud. While undeniably made on a shoestring, the ambition fueling his productions is consistently high, and one of these days someone is going to give him a moderately substantial budget and I for one am incredibly interested in seeing what he would do with it.

Begos’ third motion picture Bliss is his most accomplished to date. Featuring a strong cast centered around a sensational Madison (who’s in nearly every scene) and a crazily unhinged scenario that’s like some vampiric body-horror hybrid centered around themes of artistic inspiration and abusive self-destructive addictive personalities, this movie is a hallucinogenic scream I couldn’t have torn my eyes away from even if I had wanted to try and do so. It’s a heavy metal smorgasbord of excess and inhumanity that still finds a way to wear its heart on its blood-soaked sleeve. By the time events crescendo to their conclusion Begos has stripped both his audience and his characters naked, reveling in the carnal euphoria of creation just at the same point it explosively wallows in the gruesome tragic aftermath that the completion of Dezzy’s masterpiece has ended up inadvertently causing.

This isn’t an easy film to watch. Not because of the subject matter, even knowing nothing about the plot going in I had it pegged fairly early on why Dezzy was so sick and the reasons for her sudden longing for human blood, but more because of the aggressively psychedelic visuals Begos chooses to consistently showcase. The director, cinematographer Mike Testin (Dementia) and editor Josh Ethier (Beyond the Gates) utilize a pointedly jittery and neon-lit style that’s so excessive there’s a pre-movie title card warning viewers with heart conditions or at risk of seizures that maybe they should be watching something else. While that’s a bit of an over-exaggeration on my part, it’s not stretching things as much as some might assume. The hyperbolic stylistic choices Begos and his technical team make take some getting used to and the same goes for their vibrant color schemes, the film drowning in a never-ending miasma of garish reds, robust greens and lurid blues.

It’s a lot to take in, and there are definitely points where I feel like this excessive sense of style started to overwhelm the proceedings and significantly diluted the substance at the core of the filmmaker’s central story to the point it almost disappeared entirely and the whole thing started to feel like a pugnacious punk rock music video. Many of the side characters, no matter how well played or nicely cast they might be (George Wendt and Abraham Benrubi pop up briefly in key supporting roles), aren’t all that well thought out or developed. Courtney, in particular, remains a strange demonic enigma start to finish, and if not for the prickly, take-no-prisoners bravado Collins brings to her performance I’m not entirely sure I’d have cared about learning her character’s motivations whatsoever.

But Madison is a force of terrifying nature, her fracturing psyche a cornucopia of manic delirium that’s as fascinating as it is discombobulating. The actress is outstanding, depicting her protagonist’s struggles with addiction, fear as to why she can’t remember what happens during her nightly blackouts and euphoria at seeing her personal masterpiece come to fruition with gleefully raw abandon. It’s a devastating turn that grows in passionate intensity as things go along, Madison an emotional powder keg that’s just waiting for the first light of day to explode into operatically cathartic fury.

Begos’ maturation as a filmmaker is undeniable, and I love that he’s centered his latest story in such an introspectively human way. He finds a kindred spirit in Dezzy, and as despicable and abhorrent as her tale might be, the young woman’s act of artistic creation is one that feels strangely universal even with all the dismemberments, rips of flesh and gushes of blood. In Bliss, true joy isn’t in carnal pleasures, it isn’t in eternal youth and it isn’t in finding cultural or financial success. Instead, it is the act of that creation, in knowing that what will fill up the canvas or be typed upon the printed page will stand the test of time. That is where true happiness and real, unmedicated bliss can truly be found, the only danger being that its allure can overwhelm and consume the creator to the point all that’s left at the end is a pile of guts waiting to be disposed of in the nearest dumpster. 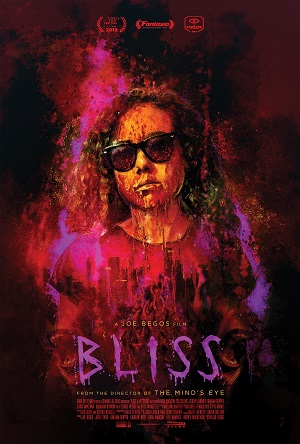