An anonymous thief (Brad Pitt) — codename “Ladybug” — is riding the bullet train to Kyoto for what his handler promised was nothing more than a simple snatch-and-grab. He was supposed to board at the head of the line, covertly grab a silver briefcase, and then get off at the next stop. There was nothing more to it. And for a guy who wanted an easy task for his first job back since going into therapy, it didn’t get any easier than this.

Not so fast. Turns out there are at least three assassins on the train, two of which — Tangerine (Aaron Taylor-Johnson) and Lemon (Brian Tyree Henry) — are protecting both the case and the son of a powerful yakuza boss known only as “The White Death.” But there’s also a mysterious young woman (Joey King) toying with an angry father (Andrew Koji), whose only child was cruelly thrown off a roof and is now in the hospital fighting for his life.

Suffice it to say, Ladybug does not get off the train with the case. Granted, if he had, then Bullet Train would not exist. Based on the book by Kotaro Isaka, this R-rated action-comedy juggles a variety of eccentric characters (most of whom are killers) and a multitude of subplots (each connected back to The White Death) and is seen almost entirely from Ladybug’s increasingly perplexed point of view. Director David Leitch (Atomic Blonde) stages a handful of excellent fight sequences, all of them during the opening hour of his 126-minute film.

As pleasant as that may sound, I cannot say I had a good time watching this. Leitch’s latest might be a step up from Fast & Furious Presents: Hobbs & Shaw, but frustratingly, it isn’t a big one. It’s as if the director watched Quentin Tarantino’s Pulp Fiction, Doug Liman’s Go, Guy Ritchie’s Snatch, and Joe Carnahan’s Smokin’ Aces and thought he’d try to use Isaka’s source material as the base ingredient in a stew that would be an homage to all of those 1990s and early 2000s crowd-pleasers.

Problem is, Leitch shows zero ability to balance snarky, acid-laced comedy with a hard-boiled slice of brutally violent action. He retreats into over-the-top clownish theatrics that worked fine (more or less) in Deadpool 2 but feels decidedly out of place in this context. There are far too many instances where the humor stops the narrative cold in its tracks, and there are moments where certain reveals, surprise cameos, and goofy antics aren’t just dumb, they’re borderline inexcusable.

Pitt, a veteran of his fair share of motion pictures similar to this one, most notably Snatch and The Mexican, knows what he’s doing, and I can’t help but think Bullet Train would have been unwatchable without him. His dry sense of humor and awe-shucks, woe-is-me hangdog demeanor is undeniably charming, and his athleticism during some of the crazier fights remains reasonably impressive.

The other plus is the back-and-forth between Taylor-Johnson and Henry. They’re wonderful, and their easygoing camaraderie elevates every scene they appear in together, no matter how ludicrous the dialogue or ponderous the exposition. Watching the pair, I honestly began to daydream about a completely different adventure altogether: a fast-paced travelogue of Tangerine and Lemon going on their murderous assignments while discussing everything from Thomas & Friends to what they’re going to have later for dinner to which methods they’ll utilize to complete each assassination they’ve been contracted to handle.

As niceties go, that’s all I’ve got. Most of the jokes are insufferable. The balance between comedy, drama, and action is out of whack. Leitch’s staging becomes increasingly frenzied and frazzled as the train speeds closer to its final destination, and whereas fights were once cleanly staged and edited so that every punch made an impact and each kick generated bone-crushing force, by the time the climax rolls around, it all becomes a maddening visual blur.

The finale is the point at which veteran actor Hiroyuki Sanada confidently strolls into this chaotic maelstrom. But instead of allowing the action maestro to showcase his full set of skills in all their glory, Leitch shoots and edits his actions in a way that makes this impossible. He changes speeds and angles like a second-rate Zack Snyder and cuts the entire sequence together as if he were attempting his best Michael Bay impersonation. It makes Leitch feel like a plagiaristic impersonator, and it’s hard to believe this is the same guy who helped craft John Wick and is a key member of the creative team that made that franchise a smashing success.

I’d say more, but I don’t have the energy. Even with its massive international ensemble of familiar faces — including the likes of Sandra Bullock, Bad Bunny, Masi Oka, Logan Lerman, Zazie Beetz, and Michael Shannon — the longer Bullet Train kept running down the track, the less I cared about what was happening. This is one high-octane rollercoaster I’d rather not have climbed aboard in the first place, and if I’d had paid for a ticket, I’d have wanted to go back and ask for a refund when the ride finally came to an end. 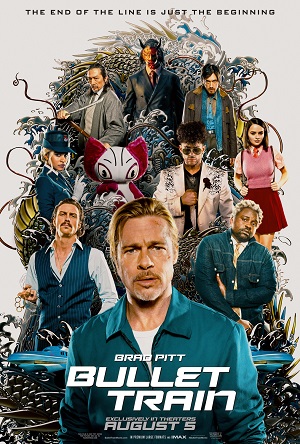