Dwayne Johnson and Jason Statham are a terrific action-comedy team. Idris Elba is a fantastic actor, and I can’t think of anyone better to play an icily malevolent villain whose brute superhuman strength is matched by his intellectual dexterity. Vanessa Kirby is a star on the rise, her scene-stealing turn in last summer’s superb Mission: Impossible – Fallout and her superlative turn as Princess Margaret in “The Crown” ample proof of that. Former stuntman David Leitch is a directorial talent who, not only helped usher John Wick into the world, but also showcased strong kinetic chops with the one-two punch of Atomic Blonde and Deadpool 2.

All of which means the ungainly titled Fast and the Furious spin-off Fast & Furious Presents: Hobbs & Shaw was going to be nothing less than a terrifically entertaining thrill ride, right? Wrong. As wonderful a pairing as Johnson and Statham are, as emotionally aggressive as Elba vibrantly portrays the film’s self-confessed “bad guy” Brixton, as charming as Kirby might be and as nice as it is to have the one and only Helen Mirren around for a couple of scenes reprising her role as Shaw family matriarch Queenie, I still found this 135-minute onslaught of action insanity to be very difficult to sit through.

Reminding me a great deal of 1989’s Sylvester Stallone/Kurt Russell cartoonish (if still slightly watchable) showcase Tango & Cash as well as director Stephen Sommer’s 2004 abomination Van Helsing, this is as annoyingly bludgeoning a major Hollywood spectacle as any I can recollect in ages. The movie feels like a massive, purposefully inane parody of the eight-film (so far) Fast and Furious series than it does a compelling side story featuring characters (Johnson’s U.S. Marshall Luke Hobbs and Statham’s former MI6 bad-boy Deckard Shaw) audiences had started to profess their fondness for. Screenwriters Chris Morgan (who has written or co-written every film in this franchise since 2006’s The Fast and the Furious: Tokyo Drift) and Drew Pearce (Hotel Artemis) have crafted a scenario that gleefully revels in its own stupidity. It’s a lark, a goof, a live-action cartoon, the final product a supercilious piece of frivolous fluff that frequently had me rolling my eyes in incredulous disgust.

Is it unwatchable? No. As I already stated, Johnson and Statham have marvelous chemistry. Additionally, Elba has no problem bringing a level of pugnacious authority to the proceedings that, at least initially, is suitably formidable. Kirby acquits herself nicely (even if the film itself doesn’t always seem to know how to utilize her), and Leitch does stage a couple of good action scenes (most notably one in an apartment building where Shaw ends up brandishing a toaster as a lethal weapon) that brought the excitement level up an additional notch or two. Also, as obnoxiously long as the movie might be it doesn’t really drag, the filmmakers keeping their foot placed firmly upon the gas pedal for every second of the running time.

Not that it matters. Surprise cameos (and not from any Fast and the Furious alums, mind you) slip the comedy portions of this flick into zanily insufferable overdrive, and there were times I felt like Leitch was just letting many of these bit players improv and riff as long as they wanted to without any limitations. While the franchise’s core themes relating to family and friendship remain, the lack of earnestness makes all of these heart-tugging melodramatic mentions involving forgiveness and redemption ring laughably hollow. It’s as if cast and crew are winking back at the audience for the entire duration of this particular adventure, and that is just one of the many reasons I found caring about anything that was happening borderline impossible.

That plot? It’s both overly-convoluted and egregiously threadbare. After MI6 agent Hattie (Kirby) goes on the run after stealing a lethal genetically-engineered virus so it wouldn’t fall into the cybernetically-enhanced Brixton’s hands, bitter rivals Luke Hobbs and Deckard Shaw join forces one more time to save the world. The former understands the global repercussions if Brixton or his minions were to get their hands on the virus. While this is something of a concern for the latter, he’s more concerned with saving Hattie and proving her innocence to MI6 (they think she’s a turncoat who stole the virus for herself), the multitalented operative Shaw’s little sister. It soon becomes clear that Brixton is a cog in a massive global conspiracy out for world domination, and only by putting their differences aside can Hobbs and Shaw hope to get the virus out of Hattie’s bloodstream (it’s contained in slowly disintegrating microcapsules) as well as save the day for the majority of the Earth’s billions of residents.

Got all that? It’s as messy and as nonsensical as it sounds, the pair racing around the world in order to track down Hattie, figure out a solution to her conundrum and stop Brixton, all while dealing with a variety of familial traumas that need to be laid to rest in order for victory to even be a remote possibility. Things culminate in Samoa with Hobbs’ massive clan utilized as a bare-chested army ready to take down Brixton’s cadre of techno-warriors with only old-school weaponry and souped-up custom automobiles at their disposal to do it. It’s as over-the-top as you’d expect, and like every film in the franchise since 2009’s Fast & Furious the laws of physics go out the window right away. But as I wasn’t emotionally invested in any of the characters the outcome didn’t matter to me, either, and not even the always winning Cliff Curtis as Hobbs’ older brother Jonah was enough to get me to feel otherwise.

Look, I get that a lot of people are going to like this spin-off a heck of a lot more than I did. They’ll be intrigued by the various mysteries still waiting to be explored, they’ll likely enjoy the comic cameos that happen throughout the film and they’ll be awed by the overtly self-indulgent action theatrics that happen around every ten to fifteen minutes. Most of all, they’ll likely enjoy the good-natured repartee that passes between Johnson and Statham, the pair displaying the same rock-solid chemistry they did in 2017’s The Fate of the Furious, and I honestly can’t say I’d be against the idea of the two teaming up again in a different film (hopefully unconnected to this series) in the very near future.

For me, though, I just can’t deal with Hobbs & Shaw. It wore me down to the point I wanted to gnaw through my seat’s armrests as I kept praying for it to end. It made me squirm uncontrollably every time a big star showed up to comedically riff for no reason whatsoever other than the studio handsomely paid them to do so. It made me want to throw things at the screen when Leitch and his Oscar-winning editor Christopher Rouse (The Bourne Ultimatum) suddenly decided to cut the climactic skirmish between the Hobbs clan and Brixton’s soldiers into unintelligible bits and pieces that made following all that was happening during the melee irritatingly difficult. I just wanted the movie to end, that’s all there was to it, and after that I can’t think of anything more that I need to say. 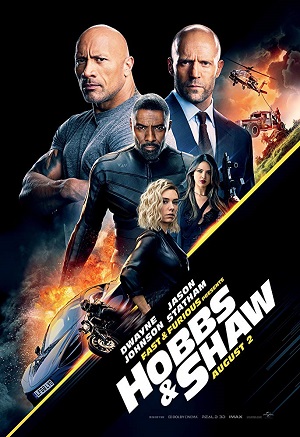