Deep in the North Sea, a Norwegian oil platform collapses in a matter of minutes. Robotics engineers Sofia (Kristine Kujath Thorp) and Arthur (Rolf Kristian Larsen) are sent to investigate. Their underwater snake is perfect for weaving its way through the superstructure to both search for any survivors trapped in an air pocket as well as help determine the cause of this unspeakable tragedy.

What they uncover goes far beyond anything anyone could ever have predicted. A half-century of drilling has resulted in the crumbling of the ocean floor, leading Norwegian authorities to order the evacuation of all platforms in the North Sea until the full scope of the danger can be determined.

Before everyone can be flown to safety and all of the drills are closed down, a geological event causes a chain reaction that starts flooding the ocean with oil. It’s a catastrophic turn of events that could lead to a worldwide catastrophe, leaving government officials with few options to contain the damage before it’s too late.

Rounding out Norway’s unofficial ecological disaster trilogy began with 2015’s The Wave and continued in 2018’s The Quake, the tense, character-driven The Burning Sea is almost as effortlessly entertaining as its predecessors. While not directly connected to the previous two pictures, it’s clear this one still fits right in with them. It is another example of filmmakers tackling genre conventions in ways that are fresh, innovative, and original, putting the focus on only a handful of characters instead of trying to revel in sequences of mass chaos and carnage.

This time around, the key cog is Sofia. She’s in a relationship with platform supervisor Stian (Henrik Bjelland), and when he goes missing during the evacuation she becomes convinced he’s alive and waiting to be rescued. She and Arthur manage to get onto the damaged platform and utilize their robotics expertise to pinpoint his location.

The other plotline is the Norwegian government’s decision as to how best to handle the slick threatening coastlines throughout the world, most especially their own. The thought is to destroy it by launching missiles directly into its heart while the oil is still in a giant clump floating in the North Sea. This will cause a firestorm that will engulf all of the remaining platforms, a list that includes the one Sofia, Arthur, and Stian are stranded on.

The film is not especially complex. Sofia sets out to save the man she loves no matter what the cost. There are heroics. Ultimate sacrifices are made. People go above and beyond to survive. All the requisite disaster-movie beats are hit from A to B to C. Director John Andreas Andersen and writers Harald Rosenløw-Eeg and Lars Gudmestad — the first two having worked together on The Quake and the latter having co-written the spellbinding 2011 thriller Headhunters — are not at all interested in reinventing the wheel.

By keeping the human angle small in scope, the filmmakers do a splendid job of making this crisis personal. There are real stakes at play, and as obvious as the central dynamics are, I still cared about who lived and who died. Tension is generated during the final third, and the suspense as to whether or not Sofia, Arthur, and Stian are going to make it off of the damaged oil rig before the firestorm reaches them is genuine.

There aren’t any real surprises, I guess, and while Thorp, Larsen, and Bjelland are solid in their respective roles, there isn’t a ton of internal complexity to any of the members of this particular trio, unlike the characters in The Wave. It’s up to their performances to do all the heavy lifting, and thankfully, each actor is up to the challenge, Thorp is particularly outstanding, as she makes even Sofia’s most outlandish decisions feel authentic no matter how nonsensical they appear to be.

Andersen handles the destruction with the same confident precision he brought to The Quake, and the breathless stretch where Sofia, Arthur, and Stian are informed of the government’s decision to set the North Sea ablaze — and are only given minutes to come up with a survival plan — is masterfully executed. The visual effects are strong, while the immersive sound design adds an undeniable aura of chilling creepiness.

The Burning Sea is a topical thriller that relies upon three-dimensional characters to generate chills. It’s a white-knuckle tale of people doing the incredible against impossible odds, delivering a potent ecological message that never feels forced or clumsily didactic. There’s heat here, the embers of a suspense-filled journey into the unknown that lingers on long after the fires of a catastrophe ignited by human ignorance and greed have been extinguished. 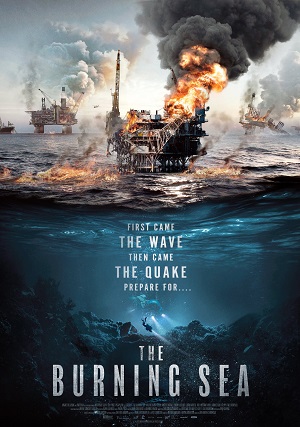