Ambitious Cloud Atlas a Thoughtful Spectacle of the Imagination

A deathly ill attorney with precious papers to return home to his father harbors a fleeing slave aboard a clipper ship cruising from the Pacific Islands back to the United States in 1849. A pre-WWII composer hides his affair with a scientist as he struggles to finish the symphony which will define his life. In 1973, a strident journalist, the daughter of a Korean War hero and also an award-winning reporter himself, uncovers a conspiracy at a fledgling nuclear power plant. A clone in 2144 Neo Seoul is freed from her bonds and awakened to a staggering truth, giving her life newfound meaning. After a global catastrophe, a timid goat herder leads an interstellar traveler into the forbidden ruins of a civilization reduced to rubble while battling against brutish cannibals.

Having not read David Mitchell’s novel, I wasn’t sure what to expect walking into Cloud Atlas, the highly ambitious, almost three-hour dramatic sci-fi spectacle co-written and co-directed by Tom Tykwer (Run Lola Run) and Lana and Lilly Wachowski (The Matrix). I knew that the trio had hired the likes of Tom Hanks, Halle Berry, Susan Sarandon, Hugh Grant, Hugo Weaving, Jim Broadbent, James D’Arcy, Jim Sturgess, Ben Whishaw and Keith David to play multiple characters of varying races and genders. I knew the movie was going to span roughly 500 years of human evolution.

But how would it all connect together? Would the filmmakers be able to mesh the themes of their gargantuan scenario with their bold thematic and visual ambitions? Or would it all collapse upon itself, becoming nothing more than a curious afterthought known more for what it attempted than for what it actually accomplished?

Thankfully, I was hypnotized by Cloud Atlas. I loved what the Wachowskis and Tykwer did here, greedily lapping up the majority of their ideas with glee. Does it always work? Do all of the threads tie back together in a satisfying way? No, at least not always, but even when the filmmakers get lost in their massive imaginations the movie remains a towering humanistic marvel, and I have a feeling the more I ponder this one the more it has the potential to become something of an enduring favorite.

I cannot say the concept of having members of the cast play multiple roles works as well as the filmmakers hoped it would. I did keep getting thrown out of the movie as I unintentionally giggled at the sight of Berry as a one-eyed Korean scientist, Weaving as an iron-fisted Nurse Ratched clone or Grant as a murderous tribal leader thirsting for blood.

But there are moments where this conceit works wonderfully. These instances give things an added layer of depth that would not exist otherwise, the connective tissue between segments and eras becoming all the more tangibly concrete in the process.

It’s hard to single out any of the actors as giving ‘great’ or ‘stellar’ performances considering the pressures of portraying so many different individuals in so many different time periods. Whishaw and Doona Bae are worthy of kudos, the former particularly so. Each actor delivers a performance that transcends the complicated mechanics of the material. They mine a variety of emotions with mesmeric gusto, each achieving a form of transcendent brilliance in the process.

The hard part with Cloud Atlas is that, even though a case could be made it’s too long, that does not mean I’d have had the directors remove a single second of material. Does a modern-era subplot involving Broadbent penning his memoirs while trying to escape from a gulag-like home for senior citizens need to be here? Maybe not, but so many of the moments during this section are so gosh darn fun they only augment my appreciation of the film as a whole.

Granted, it isn’t like the Wachowskis or Tykwer are known for their restraint. Their best films (Bound and The Matrix for the former, Run Lola Run and Perfume: The Story of a Murderer for the latter) still go off on some wildly self-indulgent tangents. Yet, so many of those moments are so stunningly realized it would be difficult to imagine them excised, and that’s exactly the situation with this motion picture as well.

I’m not going to talk about the interior narrative dynamics of Cloud Atlas. I feel like the themes are not particularly difficult to comprehend, and I’m equally certain it’s better to figure out the ins and outs of what is going on without any interference from me. Part of the joy of this operatic visual journey is having each second be a mysterious puzzle box waiting to be put together one piece at a time, knowing too much beforehand ruining the surprise. 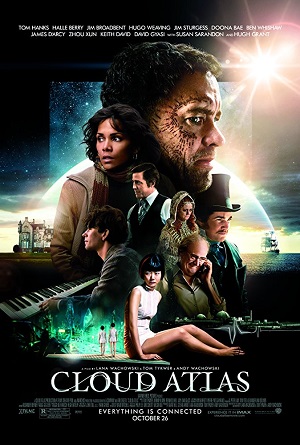