Although it suffers from a few of the same shortcomings as its predecessor, The Craft: Legacy is actually a bit better than 1996’s The Craft. This is in large part thanks to the presence of writer/director Zoe Lister-Jones (Band Aid). Not to minimize what director Andrew Fleming and screenwriter Peter Filardi accomplished with that popular cult favorite, there’s just a distinctly feminine sensibility permeating this follow-up that was oddly lacking in that pair’s endeavor.

In what can only be described as a soft sequel, Lister-Jones’ effort takes place a little over two decades after the events of the previous motion picture. Here, teenager Lily (Cailee Spaeny) is whisked away by her mother Helen (Michelle Monaghan) to the secluded home of her beau, men’s health self-help guru Adam (David Duchovny) and his three sons Abe (Julian Grey), Jacob (Charles Vandervaart) and Isaiah (Donald MacLean Jr.). Out of her element, and after an embarrassing first day of school, she is befriended by the quirkily idiosyncratic trio of Lourdes (Zoey Luna), Frankie (Gideon Adlon) and Tabby (Lovie Simone) in the ladies room.

Turns out, they are self-described witches, and they are beyond excited to meet Lily because they’re certain she’s going to be their fourth. This would complete their coven, and before you can say, “Light as a feather, stiff as a board,” this gaggle of teenagers are overjoyed to discover they have honest to goodness magical powers. Making a bond to never attempt any spells alone, they begin experimenting, including putting a hex on school bully Timmy (Nicholas Galitzine) in an attempt to get him to see the error of his misogynistic ways.

The first half is kind of glorious, and I imagine the target audience of teen and pre-teen youngsters will find much to enjoy. Lister-Jones constructs an aria to sisterhood and friendship, to honesty, acceptance and openness, and in doing so casts a beguiling spell that had me grinning ear-to-ear. Utilizing an inspired bit of shorthand, she manages to make Lily, Lourdes, Frankie and Tabby real without an excess of expository nonsense. These young women show who they are through their actions and their interactions, so even when things suddenly sprint into the fantastical as if propelled by a jet engine, as characters all four of them remain enchantingly authentic start to finish.

Much like the original, things do start to fall apart a bit during the climactic act. First with a sudden tragedy, then with a (not so) shocking reveal as it relates to one of the four witches, and finally with the introduction of a big bad who isn’t nearly as clueless as it pertains to the dark arts as they’d like others to assume, things get a little obnoxiously convoluted. As empowering as the moment might be, the climax still comes across as moderately underwhelming, and while I appreciate that Lister-Jones takes things in a much different direction than what transpired in the original feature, that doesn’t mean what she’s come up with is entirely satisfying.

Even so, there is a refreshing candor to The Craft: Legacy that I could not resist. Much like Brad Michael Elmore’s criminally underseen modern-day vampire thriller Bit from earlier this year, there is a freshness to how this supernatural venture treats gender, sexuality, attraction and friendship that’s remarkable. The film wears its inclusivity proudly on its sleeve like a badge of honor but not in ways that could be construed as being false or facile. It’s genuine through and through, and I’m not sure that’s something I can say about the original.

We have a Trans character played by a Trans actress (Luna, best known for the television documentary “Raising Zoey” and who is superb) who is not defined by being Trans. We have another character speak frankly about their bisexuality for this first time, doing so with a heartfelt authority I can’t say I’ve ever seen in a major studio PG-13 genre entry. The multicultural casting doesn’t feel like a stunt. The mother-daughter journey shrewdly lurking at the heart of Lister-Jones’ story isn’t just tossed in for good measure like an afterthought.

Heck, even the reveal linking the 1996 feature to this one surprisingly works. While that disclosure is a little heavy-handed, the way the central characters most affected by this revelation relate to one another is so emotionally brazen, so nakedly raw in its honesty, I kind of didn’t mind how goofily convoluted it was. Additionally, it leads to an unexpectedly powerful final scene that brought a quick tear to my eye, and as a fan of the original (and even though some might look at the moment as a shameless attempt to set up a sequel) I couldn’t help but smile.

Will The Craft: Legacy achieve the same sort of long-lasting cult status as its predecessor? Only time will tell on, and I can’t say being released via Premium VOD and not in theatres (and with precious little marketing to boot) is going to help. But for my part, I enjoyed what Lister-Jones accomplishes here even if not everything she conjures up successfully manifests. There’s magic being performed by this quartet of young witches, and here’s my hope that the target audience is there to bear witness. 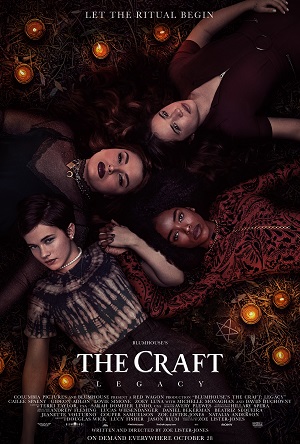