Unfocused Dark Phoenix a Frustrating Final Bow for the X-Men

Frustrating. That’s what Dark Phoenix, the twelfth film in the X-Men series and a direct sequel to 2016’s X-Men: Apocalypse, turns out to be. Not mediocre like X-Men Origins: Wolverine. Not terrible like X-Men: The Last Stand. No. The word for this film, reportedly the finale of the current iteration of the franchise (unless the long-delayed The New Mutants ever gets a release) now that Disney owns 20th Century Fox and Marvel Studios can absorb these characters into the MCU, is frustrating.

Why? It’s frustrating because there are so many incredible elements at play, so many outstanding set pieces, so much potential for drama, that when it fails to deliver on just about any of them in a satisfying way one almost cannot help but walk out of the theatre at a loss for words as to what the heck happened. Writer/director Simon Kinberg, stepping behind the camera for the first time after being a longtime producer and screenwriter for the franchise, delivers a number of incredible moments. He also can’t maintain focus, never constructing a consistently compelling narrative that’s near as emotionally involving as it by all accounts should be. It’s a messy, discombobulated spectacle that forgets about its main character far too often and frequently turns its attention towards the supporting players for reasons that are tired and unfortunate, this saga of a young woman at war with her own psyche spending more time with the various men in her life than it does with her.

In the ten years since the X-Men saved the Earth from Apocalypse, Professor Charles Xavier (James McAvoy) has done a terrific job transforming his ragtag group of misfit mutants into international heroes the world turns to in times of crisis. Such a moment is an emergency flight into outer space when a U.S. space shuttle is damaged by a mysterious solar anomaly. Even though she has reservations, team leader Raven (Jennifer Lawrence) assembles X-Men Hank McCoy (Nicholas Hoult), Scott Summers (Tye Sheridan), Jean Grey (Sophie Turner), Peter Maximoff (Evan Peters), Ororo Munroe (Alexandra Shipp) and Kurt Wagner (Kodi Smit-McPhee) for a rescue mission. While initially things go smoothly, the entire team is put in jeopardy when this strange ethereal cosmic irregularity appears to change course as it targets the damaged space shuttle and subsequently the X-Men’s rescue craft. But Jean, attempting to sacrifice herself to save the others, absorbs this bizarre interstellar force, her strong psychic mutation miraculously keeping her from harm.

If only that were the case. This strange force augments her mutation to a place of untold power, and Jean is having trouble controlling it. After a horrific tragedy, the young woman seeks out Erik Lehnsherr (Michael Fassbender), now living in seclusion on a small island with fellow displaced mutants. But after the U.S. military blunders in trying to capture her, Jean is banished from this safe haven and sent back out into the world alone. With no one to turn to she unexpectedly finds help from an alien visitor (Jessica Chastain) who has been traveling through the solar system looking for someone just like her, Professor X, Erik and the remaining members of the X-Men hot on both of their trails for a variety of reasons, some of them far more thoughtlessly murderous than they are selflessly noble.

At first the emphasis is right where it should be. Jean Grey is the person who is in the most internal turmoil as her body and mind are slowly ripped to shreds from within. Adding to that is Chastain’s malevolent alien, a being intent on forcing all aspects of the woman’s humanity out of her. This is coupled with an unforgivable betrayal on Professor X’s part and a refusal by Erik, even with the countless lives he’s taken wearing the mantel and helmet of Magneto, to help ease her psychological turmoil. Jean’s inner war is very real, and Turner pulls out all the stops as she attempts to make this struggle emotionally authentic, the “Game of Thrones” actress having a number of moments that are breathlessly captivating as events progress towards their fiery conclusion.

Yet, every time things look as if they are going to get interesting, every instance when it appears this horrifying psychological struggle is going to achieve maximum impact, Kinberg inexplicably goes back to Professor X and Erik (and to a lesser extent Hank) at the most inopportune of times. The film for some reason decides it’s more useful to emphasize how Jean’s mental scuffles affect the men in her life more than it does her own. It places their well-being above hers, ultimately making Professor X and Erik the keys to her theoretical survival and ability to triumph over the intergalactic force that has latched itself onto her DNA. Jean becomes a supporting character in a movie that is technically all about her, and if this isn’t an unfortunate turn of events I’m not sure what else would have been.

Kinberg does deliver serious spectacle that’s unlike almost anything else the prior X-Men films have showcased up to this point, including X-Men: Days of Future Past. There’s a confrontation outside of an unnamed foreign consulate on the streets of New York that’s crazy good, while a mental battle of wills between Jean and Erik over a U.S. military helicopter in the center of the latter’s mutant commune is nothing less than sensational. Best of all is a climactic fight onboard a speeding train that displays mutant powers in a fashion and a manner they’ve never been utilized before. Erik’s abilities, the mutant in his full Magneto glory, are particularly spectacular, and there were several instances where I blurted out a hushed shriek or quiet squawk as this violent man unleashed metallic hell upon the alien intruders attempting to defeat both he and the rest of the X-Men.

I’m still left perplexingly unmoved by Dark Phoenix. The alien threat is vague and ill-defined, and as unnerving as Chastain might be in her almost reptilian seductiveness she’s still never as scary or as menacing as I am sure she is supposed to be. Worst of all, because Jean isn’t at the center of her own story, the film’s climax ends up being something of a bizarrely unemotional irritation. It’s moderately exasperating how things eventually play themselves out, and while I appreciate the risks Kinberg and his team are taking with the material, and while I was rooting for the film’s success even when I could see it falling annoying off the rails, this climactic journey of the X-Men just didn’t do it for me. As I said earlier, it’s frustrating, and I can’t think of anything more to say. 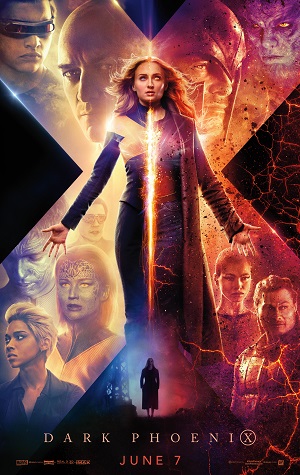