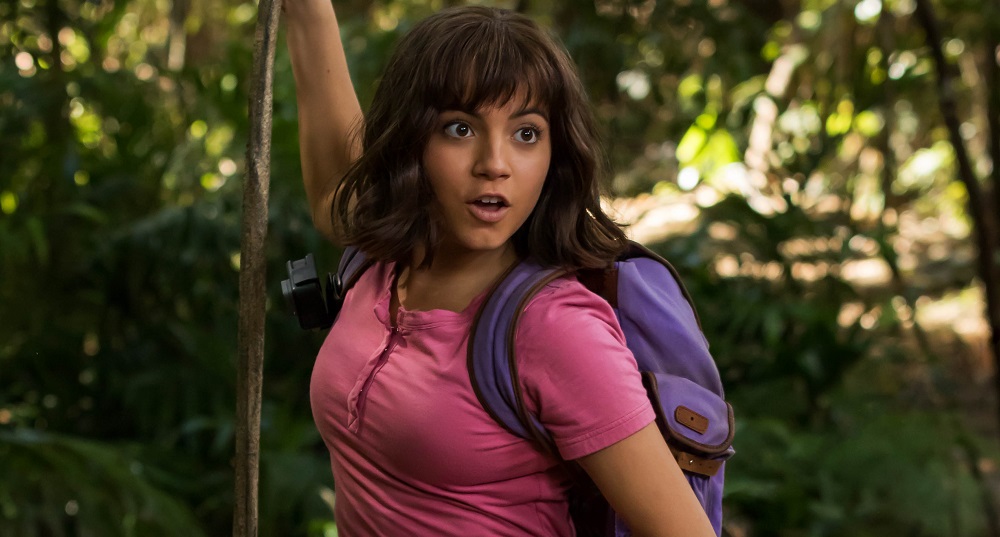 After spending the first 16 years of her life exploring Central American jungles with her zoologist mother Elena (Eva Longoria) and archaeologist father Cole (Michael Peña), energetic and intelligent teenager Dora (Isabela Moner) has been sent to the wilds of Los Angeles to attend high school. She’ll be living with relatives, most notably former childhood best friend and cousin Diego (Jeff Wahlberg) and her beloved Abuelita Valerie (Adriana Barraza). It’s a new sort of jungle for Dora to explore, one with its own individualistic dangers, mysteries and social hierarchies, and the teenager is determined to tackle every obstacle tossed her way with the same positive, can-do attitude that served her so well out in the middle of a tropical rainforest.

But while on a school outing to the Natural History Museum, Dora is kidnapped by a band of mercenaries and Diego, fastidious wannabe valedictorian Sammy (Madeleine Madden) and astronomy-loving social outcast Randy (Nicholas Coombe) are accidentally abducted at the same time. After being rescued by college linguistics professor Alejandro Gutierrez (Eugenio Derbez), a friend of Elena and Cole’s, it’s clear to the four classmates they’re no longer in California. Instead, they’re in the middle of a giant, unexplored jungle, and the mercenaries want Dora to help lead them to her parents who are in turn searching for a lost mythical Incan city that purportedly hides priceless golden treasures. Instead, with the assistance of Diego, Sammy and Randy, not to mention her peppy pet monkey Boots, she intends to outwit these nefarious treasure hunters, find the lost city, save her parents and do whatever it takes to ensure she and her new friends survive their unanticipated adventure in the rainforest.

I had no idea what to expect walking into Dora and the Lost City of Gold. I hadn’t seen a trailer or a commercial. While I knew who the character was (who doesn’t), while I knew of her popularity and cultural significance, I honestly can’t say I’ve ever seen a single episode of Nickelodeon’s animated “Dora the Explorer.” Other than knowing she had a pet monkey named Boots and often spoke with a talking backpack, I ended up going into this movie as cold as I likely ever have in my long career as a professional critic. Heck, I didn’t even know the theme song, the two eighth-graders I ended up seeing this one with making sure to rectify that hole in my pop culture knowledge long before we even set foot inside the theatre.

Directed by James Bobin and co-written by his The Muppets and Muppets Most Wanted bandmate Nicholas Stoller (with an additional assist from Monster Trucks scribe Matthew Robinson), I’m happy to report that this freewheeling kid-friendly adventure is nothing less than terrific. Intelligent, spirited, culturally respectful, age-appropriate and beguilingly character-driven first frame to last, I had an amazing time sitting in my seat watching this one play itself out to conclusion. Putting it simply, this is one of the most entertaining movies of the entire summer, Dora’s teenage adventure into the unknown an exploratory wonderland of imagination I flat-out loved.

Things take a second or two to get going. The opening prologue, while almost certainly going to please fans of the animated television show, isn’t great, and for a moment I did start to wonder if the film’s cartoonish atmosphere was going to prove to be too hyper and inauthentic for me to be able to enjoy myself. But the moment Dora ages up, lucks her way into a major discovery that helps her parents discover the potential whereabouts for that fabled lost city and then ends up heading to Los Angeles to attend high school, things begin to look up. When she gets to the city, reconnects with an image-conscious Diego, catches the ire of Sammy and makes instant friends with Randy, things get even better.

But it is when the kids get kidnapped and flown to that South American jungle where things really begin to soar. There is a hyperactive enthusiasm that’s never so rambunctious it could potentially become annoying. Better, Bobin allows each of the teenagers room to blossom and grow. As absurd as the situation they are all involved in might be, as much they are all playing various 16 or 17-year-old archetypes, the script still allows each of them to grow and evolve in an emotionally affecting manner. Their excitement feels real. As does their worry, fear, apprehension, resolve and, most notably, courage. They are the heart and soul of the film (not to mention I could listen to Randy giddily scream, “It’s a jungle puzzle!” for a solid week and likely never grow annoyed at hearing it from him), and it is their growing affection for one another and collective camaraderie that makes all of this work as well as it does.

I’m not going to go into specifics as I don’t want to ruin any of the surprises. All the same, rest assured there are plenty of callbacks to the animated televisions series, and a nefarious mask-wearing thief does indeed make a couple of memorable appearances. There’s also an absolutely sublime fantasy sequence smack dab in the middle of the story that showcases Bobin, Stoller and their crew all working at the absolute top of their respective games, this phantasmagoric assault on the senses a visual whirligig of wondrous delights that will have fans of the show doubling over in euphoric laughter and everyone else giggling so madly they’ll be right on the verge of doing the same. It’s the same magic the pair brought to The Muppets and it shows in every single frame of this motion picture as well, and I have a hard time visualizing the type of person who could walk out into the sunshine after watching this and claim to have been underwhelmed. I just don’t think it’s possible.

There are some storytelling missteps here and there, and it makes zero sense to me how the majority of the mercenaries just summarily disappear during the film’s climactic third. But Moner, after already making memorable impressions in films as disparate as Sicario: Day of the Soldado and Instant Family, is nothing less than spellbinding as the title character, bringing a level of charismatic elation to her performance that’s spectacular. Dora and the Lost City of Gold is superb, and here’s hoping this live-action teenage take on the material is a modest hit, if only because selfishly I want to watch this pint-sized adventurer head out into the wilds to continue her exploring immediately. Or, at the very least, just as soon as she gets her hands on a new map, fills that backpack with necessities and makes certain Boot’s boots are tightly tied. I could live with waiting until that happens, too. 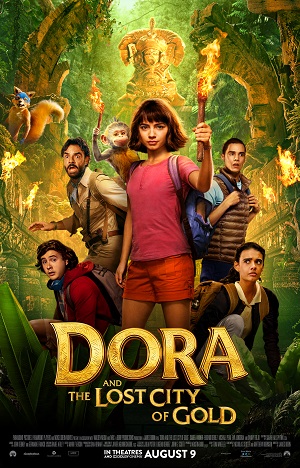