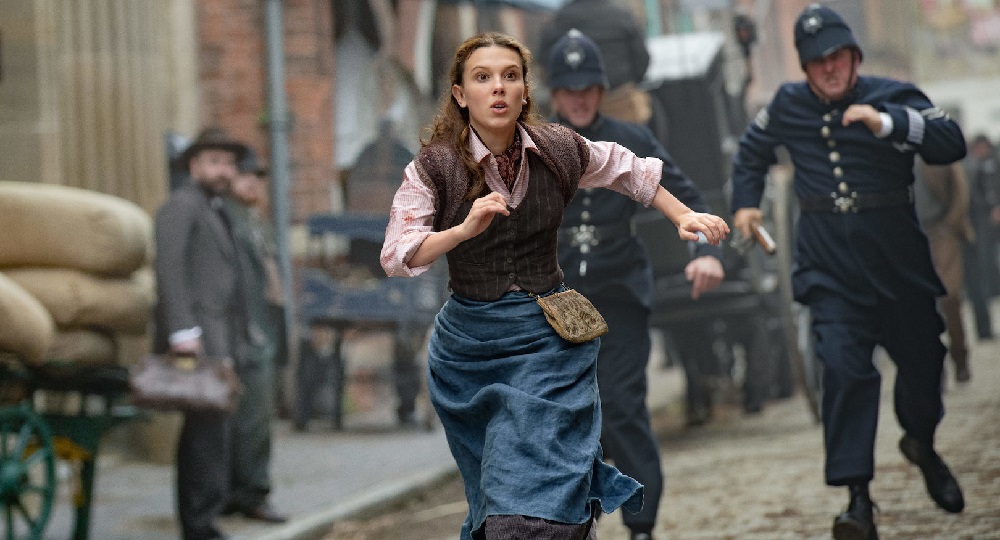 The Game is Afoot in Energetically Amusing Enola Holmes 2

After her success saving the life of Lord Viscount Tewksbury, Marquess of Basilweather (Louis Partridge), young upstart Enola Holmes (Millie Bobby Brown) decides to open her own detective agency. Yet, because she is a young woman, and also due to the fact her older brother is none other than the renowned Sherlock Holmes (Henry Cavill), Enola has the worst time drumming up customers, and is on the verge of closing the business.

Then Bessie Chapman (Serrana Su-Ling Bliss) walks through the detective’s door. Her older sister Sarah (Hannah Dodd) has disappeared, and the child requires Enola’s help. But this mystery is far more dangerous than anticipated. It also coincidentally links up with a government banking scandal Sherlock is working on, so it will take both Holmes detectives to figure out what is going on and who is behind it all, all the while sinister Scotland Yard chief Superintendent Grail (David Thewlis) ominously tracks their every move.

Every time I worried that Enola Holmes 2 would push too far into being a frenzied piece of juvenile fluff, returning director Harry Bradbeer and his divine cast — again led by the magnetic Brown — managed to right the ship with such ebullient showmanship that I couldn’t help but smile. While not quite rising to the heights of its 2020 predecessor, this gonzo sequel still manages to effortlessly entertain.

I do love the melding of fact and fiction. I also quite like the ways Bradbeer and the screenwriters mischievously toy with Arthur Conan Doyle’s original characters. There is an inherent playfulness to the tone and structure of the material that could be aggravating if there were any egregious missteps or if the filmmakers did not respect their audience. Instead, the viewer’s intelligence is treated as a given, so even when things drip into cartoonish goofiness, there is an underlying truthful sincerity to the chaos that remains consistently wonderful.

With the Match Stick Girls’ Strike of 1888 as the background event around which the central mystery revolves, Enola jumps from one madcap escapade to the next. She goes from working in a match factory and learning about the lethal conditions the girls unknowingly spend each day toiling in, to attending a high-society ball where she is instructed on how to wordlessly flirt with a fan, to being falsely accused of murder and forced to escape from prison to prove her innocence. And that’s only the tip of the lethal iceberg.

It is that last item that brings back into the fold Helena Bonham Carter as Enola’s suffragette mother Eudoria and Susan Wokoma as clandestine judo master Edith, and their all-too-brief appearance does not disappoint. The escape from the prison does go on a little long, almost as if Bradbeer doesn’t want to let these two women disappear back into the vague unknown from which they came. But it’s so nice to see all three ladies working together to problem-solve and ultimately beat back their pursuers that I didn’t find the padding of this sequence to be too egregious, and the chemistry between Brown, Carter, and Wokoma is too infectious to ignore.

The climax is also deliriously invigorating. Enola and Tewksbury are joined by Sherlock in an action-heavy showdown against the motley crew of thugs who have been hounding their every move during the search for Sarah. It’s all exceptionally orchestrated by Bradbeer and creatively edited by Adam Bosman, while the raucously euphoric score by Daniel Pemberton (Birds of Prey) does a lovely job of setting a suitably rambunctious mood. I also loved the way the primary villain is revealed, and while their identity is hardly shocking, the deliciously understandable deviousness of their actions is nothing less than sublime.

Unlike the first film — even though they are close to the same length (this one is six minutes longer than its predecessor) — Enola Holmes 2 does noticeably drag, especially during the somewhat laborious first act. There are too many flashbacks, and while Enola’s breaking of the fourth wall is once again entirely by design, I still felt like some of the instances where she speaks directly to the audience could have been discarded. There is also a childish flippancy to some of the early beats that annoyed me, but those get dialed back considerably once the game is afoot and the heroine and her brother discover they’ve been unwittingly working the same case the entire time.

The good news is that watching Enola run around Victorian London solving crimes, getting into trouble with Tewksbury, and in general making a fiercely independent feminist nuisance of herself remains a great deal of fun. Even though I’m not familiar with author Nancy Springer’s series of books all of this madness is based on, it’s elementary, my dear reader, that my vote is for this story to continue into a third chapter, and to do so right away. 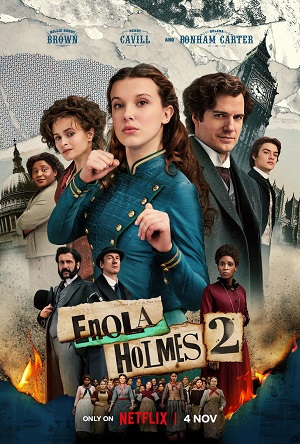