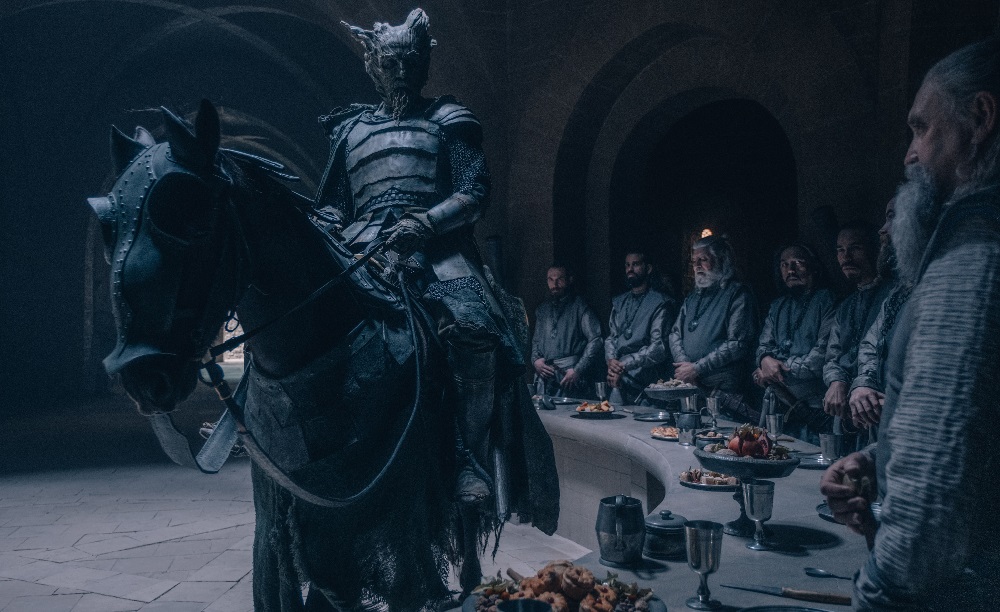 Green Knight a Legendary Journey into the Impenetrable Unknown

For those expecting a massive Arthurian adventure with clashing swords and thundering horses filling the screen, David Lowery’s The Green Knight will likely come as something of a major disappointment. The Ain’t Them Bodies Saints and Pete’s Dragon filmmaker is back mining similar ideas and thematic elements as he did with such beauteously infuriating grace with 2017’s A Ghost Story. This is an otherworldly tale told at a measured pace that doesn’t spoon-feed the viewer a single easy answer to any of its impenetrable psychoanalytical moralistic queries.

Based on the 14th-century epic poem Sir Gawain and the Green Knight, the story is simple enough: The handsome Gawain (Dev Patel), nephew to the king (Sean Harris), dreams of becoming a knight. On Christmas, a strange visitor comes calling to offer a challenge: to play a dangerous game with him, with unforeseen consequences. Gawain recklessly accepts, not fully understanding that by doing so, he sets himself on a path wherein myth becomes fact, the truth can be a lie, and love, honor, and friendship do not always happily coexist.

Nothing is certain as far as this journey into the unknowable is concerned. One of the hallmarks of the epic poem is its ambiguity, and that is a facet Lowery fearlessly maintains. Gawain’s quest is rich with symbolism, and there is never a moment where this wanderer doesn’t question his motivations for staying on the path he has set for himself to trudge upon, knowing at the end it is likely death that awaits him.

Or does it? Life and death walk hand-in-hand in barren, battle-scarred landscapes much as they do in lush forests abundant in color and activity, seemingly empty homes that have succumbed to the ravages of time or giant castles rich in their opulence yet still lacking in ways that make them feel empty and inert. People become ghosts, aimlessly slogging from one day to the next, while actual phantoms showcase more robust vivacity than those lucky enough not to have had their heads cleaved from their bodies and callously thrown into a pond.

Lowery stays true to the original text in that he steadfastly refuses to literalize anything that transpires for Gawain as he keeps moving towards his climactic encounter with the eponymous Green Knight. This does not mean he doesn’t still give random insights as to what he may want the audience to consider as they watch events methodically unfold.

At one point, Alicia Vikander goes into a dramatic monologue about the color green. If viewers listen intently, they’ll gain valuable insight into not only what her particular character hopes Gawain will learn from her musings but also what Lowery was likely pondering as he fitted together the pieces of his elaborate screenplay. While her words could be considered a bit too on the nose, this expository aria is so beautifully delivered, so overflowing in conviction and emotional resonance, that its deliberate didacticism didn’t bother me.

Vikander, like other members of the talented ensemble, pops up in a pair of vital roles, neither of which I will spoil. Her performance is a titanic marvel, however, and no matter which character she is portraying, the actress brings a layer of ethereal consequence that’s extraordinary. The corners of her face come alive to astonishing effect, her almost effortless physicality as she glides from one scene to the next as impressive as it is destructively haunting.

In virtually every scene, Patel is simply marvelous. Gawain thinks he knows what is happening and is certain he has a grasp on what life has in store for him. But as he inches closer to his destination things become a murkily obtuse mirage where nothing is real and everything is in illusion. Patel makes it all work, his darting eyes a window to Gawain’s inner travails, while his physically stoic permutations gradually give way, stripping the character of his confidence and leaving him contentedly naked as he readies himself to receive the Green Knight’s “gift.”

I should mention that the film is a technical stunner, and every facet of the production is superb. Andrew Droz Palermo’s (One & Two) camerawork, Jade Healy’s (Marriage Story) production design, Malgosia Turzanska’s (Hell or High Water) costumes, the seamless visual effect and the mind-blowing sound design — all of it is outstanding. Best of all might just be the lush, stunningly multilayered score by Daniel Hart (The Old Man & the Gun), which adds timelessness to the sonic landscape that borders on otherworldly.

The cycle of life is understood by all: We are born. We live. And, at some unknown point out in the distance, we will die. While we are the authors of our stories, after that final day comes, it is equally certain we will not be the ones to tell them after we’re gone. Tales of who we were are for the living to embellish, minimize, puff up, or, whether deserving or not, make legendary.

This is the ongoing lesson of The Green Knight. Much like with Gawain, while it is the journey that matters most, the final telling will undoubtedly be out of our hands, so we shouldn’t lose our heads worrying too much about it. 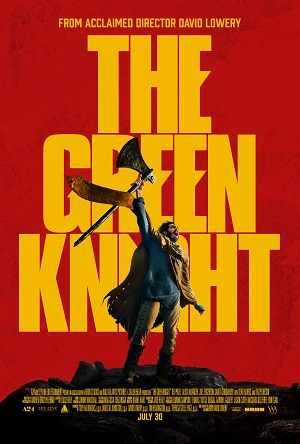