After the underground cult success of writer/director Nicolas Pesce’s previous two independent esoteric genre outings The Eyes of My Mother and Piercing, the filmmaker has been handed the keys to Sony’s dormant The Grudge franchise by producer Sam Raimi. Not so much a reboot of creator Takashi Shimizu’s hit 2004 English-language variation of his own Japanese horror sensation Ju-on as it is a side tale that begins only days before Sarah Michelle Gellar tragically steps foot inside that cursed Tokyo house for the first time, there is a startlingly pitiless ambition on display here I cannot deny. Pesce has a unique eye and an even more distinctive slow-burn style, his new take on this material having an icy flair I was consistently fascinated, enthralled and even disturbed by.

It is a pity that the whole thing goes so obnoxiously off the rails just as it’s building to a conclusion. Pesce and his fellow screenwriter Jeff Buhler (Pet Sematary) have noticeable difficulty tying everything up in a satisfying way. It’s almost as if they’re hamstrung by a combination of studio-imposed mandates to try and satiate a large audience but also by the various impersonally darkened corners they’ve somehow written themselves into. Characters act even stranger than normal, conversations between equals lead nowhere and pivotal plot points feel as if they’ve been pulled out of a hat at random than they do anything coherently related to what has already transpired. The wheels come completely off, and for the latest entry in a franchise entry that goes all the way back to 2000 for things to fall apart so suddenly was a massive disappointment to say the least.

Until then, though, I was fully down with what Pesce was doing with Shimizu’s source material. Much like he did with his previous efforts, the director isn’t afraid to take his time. He is a visual filmmaker who fills his frame with unusual sights that tend to play out right on the fringes of the frame. Pesce challenges the viewer to follow along with what he is doing, refusing to over-explain as he has the characters discover just how perilous their situation is all on their own.

In this case, there are moments he’s got three subplots happening set during different years (2004, 2005 and 2006) all playing out at once. Pesce handles this beautifully, and I never felt like I was losing track of who was who, why they were important or at what point in time we were seeing them in. It’s a tremendous juggling act, one that feels unique to this motion picture yet also still pays delicate homage to the Japanese style of horror filmmaking that inspired things at the exact same time. This helps give this take on The Grudge a frigidly macabre ambience that’s unsettling, the director’s cutthroat approach frequently impressive if still at times purposefully unpleasant.

This all makes that last third all the more upsetting. Pesce and Buhler are hamstrung by how they have reworked Shimizu’s mythology for this unrelenting supernatural evil and as such can’t find a way to satisfyingly resolve their story. Two key characters have a late-night conversation that’s frustratingly pointless, while the actions taken by one of them afterwards would be unintentionally laughable if it made even a single lick of sense. While there’s a lovely scene where identity and intent are a crucial mystery, the reasons for why it is happening are so absurd it ended up having little effect on me. It all rings hollow, and even a clever twist in the final scene had zero impact because of the slapdash way the film decides to bend, twist and even break the rules it had initially set for itself to follow.

As for that plot, after a brief prologue at the Tokyo house at the center of the 2004 version, things move forward to 2006 as recently widowed Detective Muldoon (Andrea Riseborough) and her son Burke (John J. Hansen) move to a new town to begin life afresh. When she and her new partner, grizzled veteran Detective Goodman (Demián Bichir), investigate a gruesome roadside death, the clues all lead back to a house where a horrific murder-suicide took place two years prior. That case haunts Goodman even though he personally never set foot inside the home, letting his partner Detective Wilson (William Sadler) take the lead on the case instead.

From there Pesce moves between a variety of interlocking stories all involving the house, talented actors John Cho, Betty Gilpin, Lin Shaye, Frankie Faison and a splendid Jacki Weaver (adding levity and humor just when it is needed the most) all filling key roles. While the core parts of the narrative revolve around Riseborough’s investigation into the house, its history and the curse that follows anyone unlucky enough to step through the door, Pesce still makes sure to give his cast plenty of room to create memorable characters. Each actor taps into the vibe he’s created for them with invigorating ease, and that they are given such creative freedom in the context of such a down and dirty horror outing is to my mind refreshing.

That’s all great but it’s still all for naught. The last 15 minutes are disastrous. Worse, they only call additional attention to how inexorably grim the entirety of the remainder of the film has been. This version of The Grudge has a heck of a lot going for it, not the least of which is that talented cast, Zack Galler’s (The Abandoned) marvelous cinematography, a suitably disquieting score from The Newton Brothers (Doctor Sleep) and the director’s confidently austere handling of the material. But none of this can overcome an ending this ruinous. While I’m okay with how brutally Pesce treats his characters, that there is no sense of catharsis or redemption, no matter how minor, is something of an issue, the climax making all that previously transpired next to meaningless. 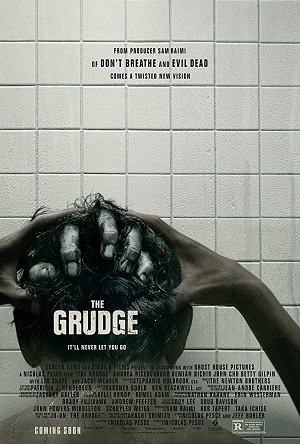