Mediocre Infamous Not Worth Following

Joshua Caldwell’s wannabe 21st century Bonnie and Clyde romantic crime thriller Infamous is a blandly mediocre motion picture whose many shortcomings are augmented considerably courtesy of current events. It’s hard to imagine a film being released at as wrong a moment as this. This is a tone-deaf morality play that often unintentionally feels like someone sat down and thought to themselves that they should remake Melina Matsoukas’ masterful Queen & Slim only with far less interesting and considerably more loathsome characters. Just to make things even more reprehensible? They make the leads Caucasian.

I get that this was likely not Caldwell’s intent. I understand that the movies were made at roughly the same time so most of the similarities are likely more coincidental than they are anything else. But it’s still hard to look at Infamous and not wonder if, with all that is happening in the world, with protestors flooding the streets demanding equality, police reform and social justice, when individuals around the globe are proudly stating that “Black Lives Matter,” anyone anywhere is going to be interested in giving this a look.

Is that fair? No. Not really. But there are times when as much as you’d like to disassociate art from current events doing so becomes, not only difficult, but downright impossible. On another day I’d have dismissed Caldwell’s latest with a few brief words of displeasure and that would be it. This is a perfectly disposable thriller that’s competently made, has a couple of decent moments and where no one involved should hold their heads in shame. It’s just not interesting, well-plotted or original enough to positively register, and like countless other, primarily VOD-released thrillers this would be quickly forgotten had it been released a month or two ago instead of today.

The plot? Florida nobody Arielle (Bella Thorne) dreams of fame and is obsessed with building followers on social media. She makes the acquaintance of sexy bad boy Dean (Jake Manley), an ex-con on probation living with his abusive father. After a tragically lethal series of unfortunate events, the pair go on the run from authorities clueless as to how they’ll extricate themselves from this predicament and, with zero funds to survive on, resort to holding up pot shops in order get a decent bankroll that might help facilitate their escape to Mexico.

A few things happen along the way, not the least of which is Arielle secretly recording their first robbery on her cellphone, uploading the footage to various social media outlets. There’s also a police shooting, the kidnapping of a quiet college student (nicely played by Amber Riley) and a highspeed car chase that ends in a firestorm of automatic weapons fire. It all builds to an impromptu bank heist far above and beyond anything the pair have attempted up to that point, the young lovers going for one last big score before they cross the border and attempt to leave this life of crime in the dust.

Arielle is as annoying, selfish and as unsavory a main character as any I’ve had to endure following around for 100 minutes or so for quite some time. While Thorne laudably doesn’t try to soften her edges, that doesn’t mean I was impressed. While I get that Caldwell is trying to dissect youth culture’s obsession with fame and the sinister seductiveness of social media stardom, Arielle’s vapidity is white privilege personified. She is a constant headache, and being around her for even a minute is 60 seconds too long as far as I am concerned.

Manley fairs a little better, but that’s only because Dean gets more interesting as things go along. He immediately grasps the inherent danger of allowing Arielle to film their escapades and post as entertainment for their growing avalanche of followers, and his distaste over her actions is certainly understandable. Manley ends up finding a few intriguing layers to his character that didn’t necessarily appear to be there when he was introduced, and as such his performance grew on me even if the story he was a central part of rarely did the same.

There’s plenty more I could say, almost none of it good. In the end, though, I’d kind of like imagine that an ineptly plotted and thematically unfocused film like Infamous will be the last of a dying breed. It’s a mediocre movie that deserves to fade into oblivion as if it never existed in the first place, the fewer followers it ends up having the more likely that outcome is going to be. 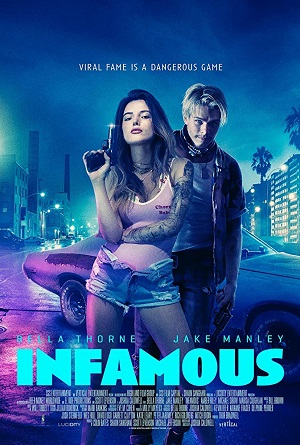