After a massive earthquake, eight teenage girls at a birthday party find themselves trapped inside a house after it is buried in a series of landslides. While at first they work together to find a way to escape their predicament, it soon becomes apparent that there is no way for them to get out. Realizing they’ll have to wait to be rescued, and with the power out, drinkable water scarce, their cell phones dying and precious little food other than a giant birthday cake, things are looking noticeably grim.

Practical-minded Olivia (Ariela Barer) believes all will be okay as long as they stick together as a group and don’t give in to fear, paranoia or any other feelings that could damage their cohesion. Unfortunately, that’s not what happens. After one of the girls swears she saw a man hiding in the house, cracks in their collective psychological foundation begin to show. Later, when one of the teens mysteriously vanishes, those fissures get even worse. The manipulative Piper (Annalise Basso) isn’t above taking advantage of the situation, soon creating her own little fiefdom with a few of the other girls in one of the bedrooms.

Writer/director Amanda Kramer’s Ladyworld is basically a micro-budget, gender-flipped Lord of the Flies contained to a handful of sets with a scenario that plays itself out over the course of a few days. It’s a talky, not always coherent drama that makes up in viscerally authentic menace what it lacks in narrative cohesion. The movie is also strongly acted by its talented group of youngsters, Basso, Barer, Ryan Simpkins and Maya Hawke the clear standouts as far as this stellar ensemble is concerned. As obvious as many of the plot developments prove to be, Kramer crafts an aura of unnerving apocalyptic certitude that grows in power as events progress, the final scene a breathlessly haunting coda that sent chills racing up and down my spine.

After an opening where Olivia and one of the other girls, the aptly nicknamed “Dolly” (Simpkins), discover just how trapped they are, both getting drenched in the process, I can’t say I was initially excited to spend 90 minutes with this collection of characters. Piper is already something of a devious queen bee long before the paranoia of their situation has a chance to start working its dark magic upon them all, while a couple of the girls closest to her show signs of going utterly out of their gourds barely 10 minutes into the movie.

But Kramer makes the most of her few sets, production designer Noel David Taylor doing an inventive job of making all of the individual rooms and crawlspaces claustrophobically unique while cinematographer Patrick Meade Jones’ camera glides through them with discomforting grace. The film also features an exquisitely disturbing sound design that when coupled with composer Callie Ryan’s equally eerie score (most of it made up of a melodic series of shrieks, moans and yelps that’s beyond alarming) becomes a thing of terrifying beauty that eloquently augments the emotional and psychological degradation that the characters are all dealing with during their ordeal.

The director also gets outstanding performances out of her cast. Barer, likely best known for her role on Hulu’s Marvel teenage superhero show “The Runaways,” balances Olivia’s inner strength with her growing sense of helplessness nicely, while Simpkins’ creepily prescient childlike timidity is surprisingly affecting, especially so given that Dolly is seemingly the only one who immediately understands the full extent of the danger they’re all facing. Hawke, daughter of Ethan Hawke and Uma Thurman, has a ferociously building intensity that took me by surprise, her portrayal of one of the girls who shifts allegiance between Olivia and Piper overflowing in magnetic authority. As for Basso, after her terrific work in Ouija: Origin of Evil, after holding her own in Oculus and Captain Fantastic, she’s nothing less than superb. I don’t think I could have taken my eyes off of Piper had I wanted to try, the complex viciousness of her performance sticking with me long after the film had come to end.

The rapidity of the group’s collective descent into madness, no matter how horrific their situation might be, is honestly hard to believe. Additionally, there were moments where I wondered why they didn’t break a window and let some of the dirt surrounding the house tumble inside in order to see if they could climb out that way to safety, as I never got the feeling that doing so would have put them in any worse of a situation than they already were in. Most of all, I can’t say I entirely bought all of these girls would have been friendly enough with one another to attend an overnight birthday party, the cliquish fracturing of their group appearing to have happened long before the quake rocked their world into catastrophic oblivion.

Even with all of that being so, I still ended up liking Ladyworld quite a bit. Kramer shows decisive directorial insights, deftly structuring her story in a way that incrementally increased my emotional investment bit by bit as things went on. She also stages a couple of marvelous face-offs between the actresses, Barer and Hawke sharing a moment near the heart-stopping climax that rattled me something fierce. While not for everyone, Kramer’s film ended up getting to me, its freeze-frame conclusion nothing less than disquietingly marvelous. 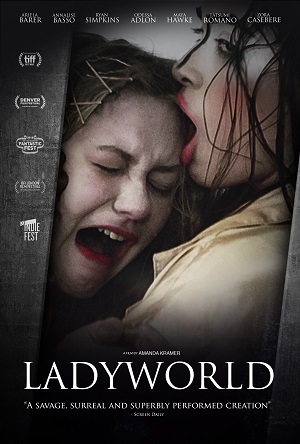