Leah (Kiera Thompson) is 10 years old. While her older sister Bex (Hannah Rae), weeks away from heading to university, tells her that’s far too young to know much about the world, she’s still old enough to know there’s something strange going on with their mother Sarah (Denise Gough). Even as their father Thomas (Steven Cree) attempts to make everything appear normal, Leah knows something is off, and this nagging thought that it’s somehow her fault makes this recognition even worse.

Things become even more mysterious when Leah finds a strange lock of blonde hair in the pendant her mother wears. She subsequently meets a doe-eyed little girl (Sienna Sayer) who claims she doesn’t know her own name. The two become quick friends, playing together each evening. But Leah begins to believe there’s something vaguely unearthly about her new acquaintance, and it’s connected to that hair. Is she a ghost? An angel? Or something even more sinister?

There are two puzzles for the pint-sized heroine in Martyrs Lane to put together, both of them sharing multiple pieces. Leah is sent on a quest to find that lock of hair when it suddenly goes missing, and in her search also uncovers the identity of her new playmate as well as the reason Sarah keeps her youngest daughter at arm’s length.

It is an arrestingly haunting tale, beautifully handled with majestically subtle confidence by writer-director Ruth Platt. There’s an unnerving calm built into the film’s DNA that’s unsettlingly fascinating, while the emotional through-line that links Leah and her moonlight visitor brought a lump to my throat and a small handful of well-earned tears to the corners of my eyes.

This couldn’t have been easy to pull off. The tale is seen from Leah’s viewpoint and the relationship between the two little girls is the center around which everything revolves, and while the identity of Leah’s ethereal nighttime guest is not altogether shocking, this doesn’t diminish the heartrending effect the climactic reveal had on me.

Platt keeps things at a measured pace. There is no hurry to her storytelling, so even at a brief 96 minutes, the director still isn’t afraid to take her time delivering thrills and chills. This does mean it takes a little while for suspense to slip into overdrive, and as eerie as things are, it wasn’t until roughly the halfway point that I could start to feel goosebumps on my arms and a shiver run up and down my spine.

What Platt is terrific at is generating anxiety. I think I spent my entire first viewing of the picture — I’ve watched it twice — resting on stomach-churning pins and needles. This means that, when things do start to get tense, they do so with purposefully disquieting vigor. Once Leah starts assembling the shards of each splintered clue and begins to figure things out on her own, I was at the edge of my seat, my eyes resolutely transfixed on the screen, eager to see what was going to happen next.

Both Thompson and Sayer are extraordinary. These are two of the best child performances I’ve seen this year, each working in exquisite tandem with their equally diminutive co-star. While the latter showcases a playful ferocity that grows in dangerous glee as things go along, the former has an internalized intensity that burns right through the screen. Platt places the success of the entire film squarely upon Thompson and Sayer’s shoulders, her risk paying off in spades, each actress delivering in ways that took me by surprise.

There are similarities to previous children-in-peril horror tales, most notably features as disparate as Jack Clayton’s The Innocents, Frank LaLoggia’s Lady in White and Guillermo del Toro’s Pan’s Labyrinth. But Platt isn’t copying anyone, Martyrs Lane walks down its own unique moonlit path with imaginative determination. The final moments have a discomforting emotional elegance that is lovely and heartbreaking in equal measure, all of which I’ll be happily pondering for quite some time. 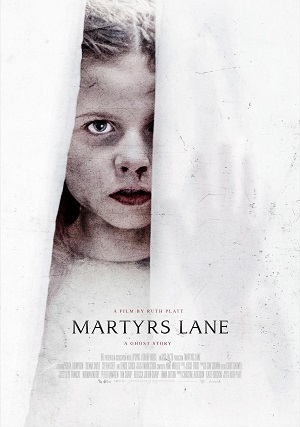