Few films are either as magical or as enchanting as Guillermo del Toro’s Pan’s Labyrinth. At the same time, few fairy tales are as perverse, terrifying or as deeply disturbing. This surrealistic war-torn wonder is an emotionally shattering marvel, a visionary triumph made be a filmmaker at the top of his game.

Returning to the same Spanish landscape of his 2001 sensation The Devil’s Backbone, del Toro once again follows the mysterious fortunes of a young child as they try to navigate the dangerous waters of a civil war. In this case, that child is Ofelia (Ivana Baquero), newly relocated to the countryside with her mother Carmen (Adriadna Gil) so they can be with her new stepfather Captain Vidal (Sergi López).

Vidal does not care for the little 12-year-old girl, his only concern the life of the hoped-for son his newlywed wife currently carries. His primary focus is on stamping out the rebels hiding within the forest by any means necessary. To him they are a disease, a virus infecting his way of life and as such in need of being eradicated. Manipulation, abuse, torture, genocide; all of these are usefully awful means to a glorious end as far as he’s concerned, the destruction of these revolutionaries the best thing he could possibly accomplish for his glorious Spain.

With her mother growing ill and her stepfather treating her like a dog, Ofelia retreats more and more inside the elaborate fairy tales she most treasures. But when a trip inside a crumbling stone labyrinth on the edge of the forest reveals a world the little girl never expected, the line between fantasy and reality begins to blur. The child finds she is on a quest that puts her own life in danger, yet one she also knows could save the life of an unborn brother she as of yet doesn’t even know.

Pan’s Labyrinth is as exhilarating as it is mesmerizing. Calling del Toro’s latest a fairy tale for grownups is too easy and a far too simplistic description for a picture that plumbs such exquisite emotional depths. Much like The Devil’s Backbone, the filmmaker looks at evil as seen through the eyes of a child, the Spanish Civil War a perfect backdrop to showcase just how far man’s inhumanity to man can truly extend.

This time, however, del Toro uses the framework of a fantasy to magnify this catastrophic human depravity. Ofelia’s journey through the looking glass is no Lewis Carroll darkly-twisted yet still sweetly-safe dreamland. Here, giant toads ominously threaten to swallow a child whole while pale men with eyeballs in the palms of their hands sit at bountiful dinner tables ready to strip the bones of any who choose to partake of the meal sitting in front of them. Ofelia’s fairy tale is a metaphor for the real horrors of her day, and while it may be populated by fairies and fauns, the real danger lies in the hands of the madmen with guns watching the 12-year-old’s every step.

In a year overflowing with magnificent visual achievements, Pan’s Labyrinth might be the most spectacular of the bunch. From the intricately designed avenues of the labyrinth, to the washed-out disheveled blues and grays of the military encampment, reality and illusion collide producing splendiferous results. Frequent del Toro collaborator Guillermo Navarro’s cinematography is stunning, while production designer Eugenio Caballero has crafted a world so meticulously realized it is almost impossible not to believe these worlds he has created do in fact exist.

This will undoubtedly be a tough sit for some. The director has created a film overflowing in adult concepts, ideas, emotions and problems. Yet he chooses to look at them through the innocent eyes of children. Some of what Ofelia does might seem ludicrous, maybe even insane, but for a small girl faced with the extreme atrocities and terrors of humankind, retreating into an imaginative fairy tale world isn’t at all an unreasonable conceit. The fact these fantasies are colored by the events taking place around her gives Ofelia an insight into war’s destructive fingerprints few others have ever experienced, her journey a haunting allegory that rocked me to my core.

López is miraculous. His is a monstrously terrifying depiction of fascist evil, and all the actor had to do was walk in front of the camera to send a chill down my spine. Off all the villains I have seen this year he is definitely my favorite, López making Captain Vidal a heartless creature so horrible even the fantasy critters populating Ofelia’s nightmares would run screaming from him if they could.

Collectively, filmmakers Del Toro, Alfonso Cuarón and Alejandro González Ińárritu, the self-described “Tequila Gang,” are having the kind of year many working in Hollywood dream about yet seldom ever achieve. Cuarón’s Children of Men might be the best film of the year, while Ińárritu’s Babel is a topically thought-provoking powerhouse. This trio has released some of the most intelligent, entertaining and richly creative pictures of 2006, del Toro’s Pan’s Labyrinth an absolute masterwork virtually guaranteed to stand the test of time. 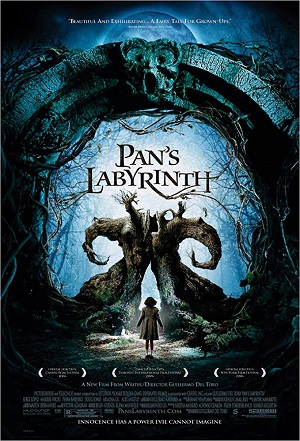