Dinner is a story at Hawthorn, a renowned restaurant located on a secluded island where only a handful of patrons are allowed to dine at any one time. At $1,200 a plate, Chef Julian Slowik (Ralph Fiennes) can afford to let his eccentricities run wild, and he has no problem making sure his guests know he is in charge and that the next few hours of their culinary lives rest solely in his hands and those of his talented sous-chefs.

Chef Slowik has handpicked this evening’s guests, inviting each of them for a meal that will be so memorable that people will be talking about it for decades to come. Each course is a clue. Every flavor is a piece of a puzzle. Chef Slowik intends to do the improbable, and his staff is prepared to follow his every order as if they were members of a religious cult and not all talented cooks in their own right.

Make no mistake, this will be a night unlike any Hawthorn has ever known.

The Menu is as delicious as it is vile, as mouthwatering as it is salacious. Director Mark Mylod (What’s Your Number?) and writers Seth Reiss and Will Tracy cook up a magnificent horror satire. Their film is a sensory and emotional feast, and I enjoyed every succulent morsel. The final scenes are a firestorm of depraved cleverness that had the preview audience I watched it with gasping, laughing, and cheering in almost equal measure.

There are many unknowns at play, almost all of them revolving around how and why Chef Slowik has prepared the malevolent feast for this chosen group of guests. But the one he isn’t involved with — the unexpected arrival of Margot (Anya Taylor-Joy), the plus-one of Tyler (Nicholas Hoult) — is the biggest question mark of all. More to the point, she is not the plus-one Chef Slowik originally approved to accompany the snobby foodie to this evening’s event.

It is the relationship that blossoms between the determined restaurateur and the confidently outspoken young woman that is the film’s most fantastically invigorating element. It’s apparent right away something ominous is happening. This becomes crystal clear when Chef Slowik reveals just how final this meal is going to be for his guests. But Margot vexes him, and until he understands who she is, why she is there, and where she fits inside the dining room — patron or staff — he won’t be able to bring the evening to a satisfying conclusion.

Fiennes is magnificent. His depiction of a bruised and battered egomaniac — not so much evil as he is lost — at the end of his mental rope is a thing of chilling beauty. He is matched by the gracefully reptilian Taylor-Joy, her emotional permutations suitably spellbinding as she begins to grasp the absurd peril of her situation. The pair’s resulting battle of wits and wills is craftily glorious, and while I wasn’t shocked by the ingredients the filmmaking team utilized to cook up their climax, that did not make it any less yummy.

Does everything add up? No, not really. There’s one major subplot involving Hawthorn’s general manager and Chef Slowik’s most trusted colleague Elsa (Hong Chau) that is more convenient than organic to the overarching narrative. Maybe when I watch the film again, a few moments during the last act won’t bother me so much. But for right now, Elsa and Margot’s battle royale feels like it came out of a standard B-grade shocker, and as inspired and smart as most of Reiss and Tracy’s script is, this slice of slasher bloodletting didn’t work for me.

What I did love is the Twilight Zone–style, not-necessarily-deserved-but-still-getting-your-just-deserts energy that much of Mylod’s latest generates. The Hawthorn guests — played by the likes of Janet McTeer, Judith Light, John Leguizamo, Reed Birney, and Paul Adelstein, just to name some recognizable members of the talented ensemble — are an eclectic bunch. Yet few of them are so evil or awful that what might be coming their way at the end of the night is in any way justified.

This deepens the satire and amplifies the suspense. Are they all wealthy? Living larger than they deserve and not caring if they’ve stepped a few times too many on the backs of those they feel are beneath them? Possibly. But Chef Slowik and his staff’s collective vitriol and disdain for them have been equally perverted. The line between serf and nobleman slowly disappears with the delivery of each course to a guest’s table, which only augments how dazzlingly unhinged this madness proves to be.

I’m not going to say anything more. The Menu is a grotesque delight, serving up a smorgasbord of laughs, thrills, chills, tears, shocks, and smiles as the evening’s festivities inch closer to their chocolate-covered conclusion. I reveled in every delectable morsel, and because of that, I can’t wait to get back to the table for a second helping of these ridiculously tender, bloodcurdling delicacies as soon as possible. 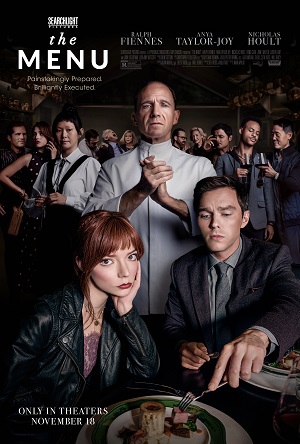