The aptly titled Monster Hunter is the latest movie born from a video game made by Resident Evil impresario Paul W.S. Anderson. It features stars Milla Jovovich and Tony Jaa battling giant, iron-shelled creatures with ominous names like “Diablos,” “Nerscylla” and “Rathalos” in a desolate landscape made up of empty deserts and jagged rocks. What else does one need to know?

Having never played the popular Capcom game series created by Kaname Fujioka, I haven’t the first clue as to how closely Anderson’s rather simplistic script mirrors its source material. What it does take major inspiration from is of all things John Boorman’s 1968 Lee Marvin/Toshirô Mifune WWII classic Hell in the Pacific, Jovovich’s determined Army Ranger Lt. Artemis and Jaa’s wily nameless hunter initially at one another’s throats before realizing they need to band together as a two-person unit if they’re going to survive.

There’s not a ton more to it. There’s an opening section where Lt. Artemis’ small cadre of soldiers out on patrol in the middle of a forsaken nowhere (a group that includes Tip “T.I.” Harris, Meagan Good and Diego Boneta) are magically transported to a strange parallel world where savage beasts roam causing all sorts of havoc. But after brutal encounters with the aforementioned Diablos and then a poisonous army of Nerscylla, she is quickly separated from her team and forced to try and survive alone.

The entire midsection of the film is devoted to watching Artemis and this anonymous hunter fight, bond and learn how to communicate before ultimately coming up with a plan to defeat the Diablos who is keeping them trapped on a rocky outcropping in the middle of a desert. Anderson stages a pair of thunderous fights between the two happening before they realize they’re better off as friends than as enemies. While Jaa is undeniably the more physically impressive performer (and I doubt needed precious little stunt doubling), Jovovich holds her own, and although I’m certain editor Doobie White (Resident Evil: The Final Chapter) deserves some (maybe most) of the credit, I did find it almost believable that Artemis could stand toe-to-toe with this hunter to the point of a stalemate.

Anderson has become something of a pro with movies like this one. As tiresome as some of them can be (with six goofy entries in the series, there’s no reason that Resident Evil: Retribution is so lazily forgettable), the director has become something of a whiz-bang master at banging out clunky chunks of pointlessly convoluted exposition as quickly, and yet still coherently, as possible in order to get his characters back into action.

Anderson’s got the great Ron Perlman to handle those duties here. He does so with cartoonish aplomb, picking a giant hairball from his frothy beverage prepared by his devoted cat chef (don’t ask, just accept) before explaining to Artemis what’s going on and offhandedly revealing she’s going to help him fight a fire-breathing dragon. Anderson treats it all just seriously enough and Perlman sells it passionately, and as idiotic as it all is the actor puts into perfectly understandable context all that has transpired as well as setting the stage as to what is about to happen next.

What else is there to say? The various creatures are beautifully designed and realized, the stunt work is strong and I could watch Jaa violently hack away at Diablos and Nerscylla for a solid week and likely never grow tired of doing so. As for Jovovich, as firmly inside her wheelhouse as Artemis might be it’s still difficult not to get a vicarious thrill watching her charge a gigantic Rathalos (that’s the dragon) head-on. Monster Hunter is exactly what you think it is going to be, nothing more, and certainly nothing less, and I’m okay with that. 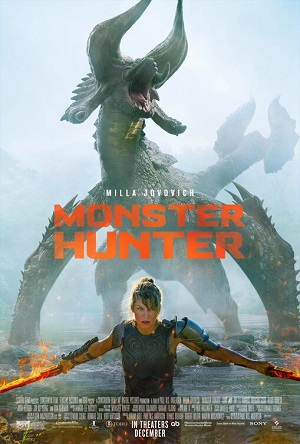