Guillermo del Toro’s ambitious adaptation of William Lindsay Gresham’s 1946 novel Nightmare Alley might be the most visually stunning motion picture I’ve seen this year. Tamara Deverell’s magnificent production design is exquisitely realized down to the last detail, popping with texture and color. Dan Laustsen’s superb camerawork is a master class of utilizing shadow and light to their best, most unsettling advantage, as the Oscar-nominated cinematographer crafts an eerily discombobulating ambiance that never dissipates. The eye-popping costumes by Luis Sequeira have a lived-in vitality that’s remarkable.

If only I felt the same about the film’s emotional components. While it is obvious this is a passion project for the Pan’s Labyrinth and The Shape of Water filmmaker, I found this to be more of a technical marvel than a character-driven one. Images leap off the screen even as central protagonist Stanton Carlisle (Bradley Cooper) frustratingly fades into the background. He’s frequently upstaged by the supporting players, most notably Molly Cahill (Rooney Mara) and Dr. Lilith Ritter (Cate Blanchett), two women who will unknowingly battle it out for possession of Stanton’s soul: one striving for his salvation, the other eager to damn him to eternal hellfire.

Stanton is a drifter escaping from a fiery past. He stumbles upon a dingy carnival prepping to break down and move to a new location. One of the more colorful carneys, Clem Hoatley (Willem Dafoe), offers Stanton a job. Warming to the hardworking young man, he even begins to show him the ropes by revealing a few trade secrets and giving him some insights into how to successfully run a carnival, even one as rundown as this.

Quick to learn, Stanton has no intention of settling for the comfortable, if still meager, peanuts the life Clem is offering promises. Instead, he picks the brains of alcoholic former mentalist Pete (David Strathairn) and his clairvoyant wife Zeena (Toni Collette) for a new act that could potentially make him a success on the legitimate stage and in the swanky nightclubs frequented by the rich and powerful. Stanton brings the beautiful Molly along for the ride, whereupon the two fall in love and marry, much to the disgust of carnival strongman Bruno (Ron Perlman) and his diminutive pratfalling sidekick The Major (Mark Povinelli).

It takes roughly a little over an hour for all of this to happen, with del Toro taking his time in order to show every side of Stanton’s psychological makeup. Is he evil? Or is there goodness residing somewhere under his skin? Is his love for Molly genuine? Or is he using her to give his act zing? Does he hold affection for Zeena and Pete? Or is he feigning friendship to learn all of their tricks so he can become one of the greatest mentalists the world has ever known?

These questions all ache to be answered — not just during this opening section of the film but throughout all 150 meticulously paced minutes. Once Stanton makes a name for himself, Molly is still there, pushing her beloved to stay connected to the selfless decency she sees within him. In the same breath, the mentalist is teased and toyed with by the seductive Dr. Ritter. The devious psychotherapist opens doors to a financial windfall that could set Stanton and Molly up for life, even if the ethics of what they’re being asked to do are decidedly shady.

With gothic horror gems like Cronos and Crimson Peak on his résumé, it isn’t a surprise that del Toro would slip into the morally ambiguous waters of film noir with roguish ease. The director is having a blast showcasing someone like Dr. Ritter in all her crimson-lipped, seductive glory. What’s more, Blanchett knows it, the acclaimed actor reveling in every twist of phrase, flip of the hair and gently violent flick of the wrist as she stubs out a cigarette. She’s unforgettable.

But del Toro is equally in awe of Molly. She is the angel sitting on Stanton’s shoulder and the one who understands the hole he is unintentionally digging for himself, never losing hope she can get him to start filling it back in before it becomes his grave. Mara is mesmerizing, her quiet demeanor loudly shouting eternal truths that are as raw as they are authentic. She adds a layer of sentimental honesty that hits hard and fast and yet never becomes schmaltzy or melodramatic.

Which makes it strange that Stanton keeps disappearing inside a story he’s at the heart of. Cooper does his best, giving a fiercely determined performance that digs into the nastier side of the human condition with zero restraint and even less of a care if doing so engenders the audience’s affinity. The problem is that del Toro seems much too eager to let everyone else stand in the spotlight in his place. Blanchett, Mara, Dafoe, Strathairn, Collette, even the late-arriving Richard Jenkins — all of their characters are more interesting than Cooper’s Stanton, and that’s a giant issue the director doesn’t seem to be interested in doing a dang thing about.

The saving grace is that del Toro stages a final 20 minutes that are nothing less than extraordinary. I can’t go into what happens in any detail — although fans of Gresham’s source material or the classic 1947 version starring Tyrone Power won’t be shocked — but rest assured that Stanton’s fate is not for the faint of heart. The climax of Nightmare Alley packs a jubilantly vile wallop, with del Toro going right for the jugular with the bold exuberance of a carney barker mainlining methamphetamine.

For some, that will likely be a shot of poisoned adrenaline worth rolling up one’s sleeve and injecting without hesitation. For me, I wanted to feel a bit more and not just be wowed by all the technical virtuosity. The high wasn’t worth the withdrawal, and I’m not sure I’ll go back anytime soon for a second hit to see if I’d change my mind. 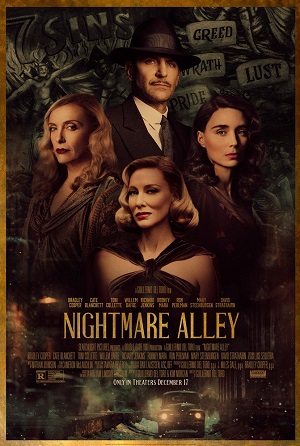