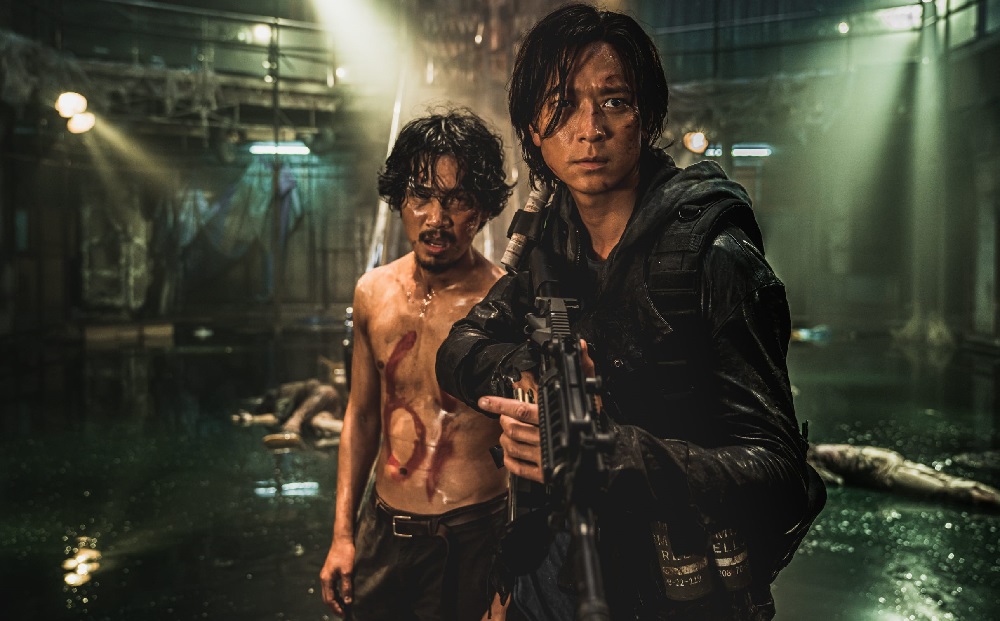 It’s been four years since a viral zombie outbreak destroyed the Korean peninsula, evacuees relocated to Hong Kong slums where they are shunned, kept in poverty and refused access to any legal employment. Jung-seok (Gang Dong-won) is a former soldier who made it out alive, the rest of his family, save cowardly brother-in-law Chul-min (Kim Do-yoon), not nearly as fortunate.

Local Hong Kong black marketers offer the pair an opportunity to make some quick, if not altogether easy, cash. They are tasked to return to Seoul with a small, heavily-armed unit of fellow refugees. Their mission? To retrieve an armored truck carrying just over $20-million that never made it off of the peninsula during the first days of the outbreak.

To what I imagine will be no one’s surprise, things go spectacularly wrong. Not only are the number of zombies rampaging throughout the city as numerous as ever, there are also bands of roaming survivors who have made barricaded communities for themselves to live in, and they don’t take kindly to interlopers from Hong Kong. Jung-seok does manage to find allies who agree to help him in this heist in return for transport to Hong Kong, a pair of wise-cracking sisters, Joon (Lee Re) and Yu-jin (Lee Ye-won), their ferociously protective mother Min-jung (Lee Jung-hyun) and their seemingly mentally unbalanced grandfather (Kwon Hae-hyo).

Far more action-heavy than its beloved 2016 predecessor Train to Busan, the highly anticipated sequel Peninsula is like the Korean lovechild of Fast Five, Escape from New York, 28 Weeks Later, Doomsday and Mad Max: Fury Road. While returning director Yeon Sang-ho isn’t hesitant to tug at the heartstring, this time he appears to be far more interested in thrilling audiences with a never-ending series of splashy set pieces. Peninsula is well made and has any number of strong individual moments, and even if it is nowhere near as memorable as the first film, it’s still suitably entertaining if taken on its own merits.

Not that doing that is always as easy as it sounds. The emotional center of this sequel is far more contrived and overtly coincidental, and even if Dong-won and Jung-hyun are strong in their respective roles, the level of melodramatic manipulation this go-around as it applies to each of their characters is fairly extreme. There is also a reliance on juvenile comedy that’s only somewhat effective, and as adorable as both Re and Ye-won are, some of their antics do grow a tad tiresome.

It should be noted that Sang-ho does not cut this sequel together as efficiently as he did his 2016 hit. He and his editor Jinmo Yang (Parasite) let a few scenes play out to laborious lengths bordering on obnoxious, the film’s climax particularly so. It takes forever for key characters to make an inevitable decision to act, and waiting for them to do it is frustrating. It’s all just absurdly drawn out, and if any other 2020 release has as many closeups of actors looking on in anguished, tearful indecision than this one does I’ll be hugely surprised.

But as annoying as all that might sound, Peninsula is still a great deal of fun. There’s an entire “Thunderdome” type sequence with Chul-min trapped in an insane makeshift gladiatorial auditorium where for two minutes he and his fellow “contestants” have to avoid a hungry zombie horde for a rowdy audience. There’s also a terrific bit where Jung-seok and Min-jung steal back the armored car, the entire sequence a confident combination of stealthy visual misdirection, beautifully choreographed fisticuffs and adrenaline-filled balletic gunplay.

I do feel like George Miller should maybe get a residual check for the climactic car chase, but the somewhat subpar CGI only reminded me just how stunning similar sequences in The Road Warrior and Mad Max: Fury Road are with all their practical stunt work and actual vehicular chaos, so Sang-ho is likely in the clear. Gentle ribbing aside, even with it all looking a bit too much like a video game, this scene is still energetically winning, everything building to a rather nifty callback to Jung-seok’s initial return to the streets of Seoul that brought a pleasant smile to my face.

Peninsula isn’t the motion picture Train to Busan was. It doesn’t feel as invigorated or as alive, and it certainly doesn’t have the complex characterizations and the emotional depth. But Sang-ho has still made a lively sequel that’s a pretty decent riff on any number of genre essentials, tossing zombies into the middle of all the carnage to give things a somewhat creative spin that makes the predictability of it all palatable. It’s worthy of a look. 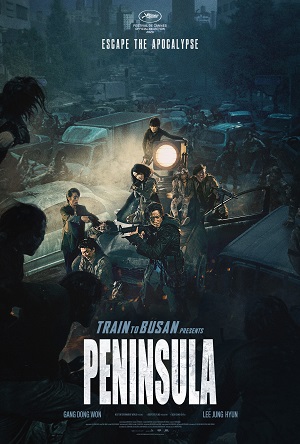