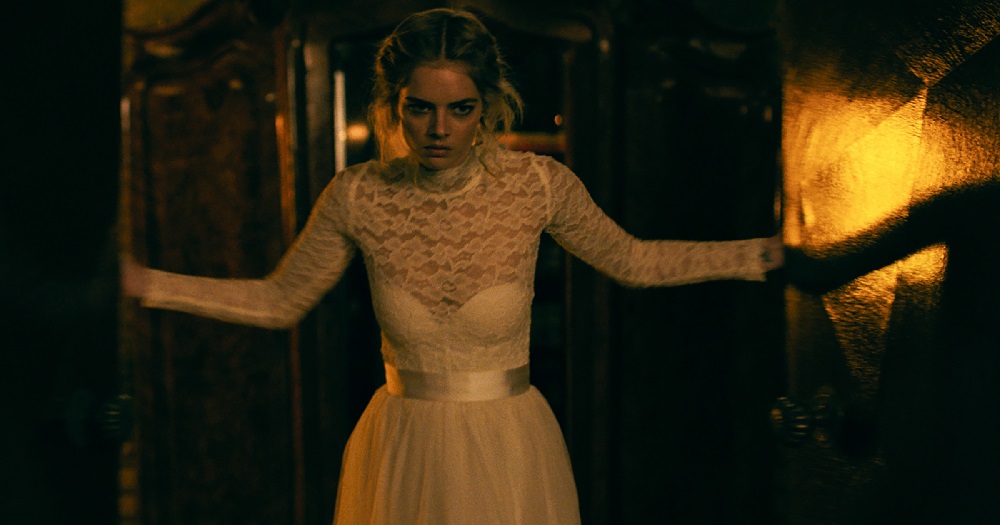 Gleefully Murderous Ready or Not Plays a Winning Game

It’s the happiest day of Grace’s (Samara Weaving) life. An orphan who never knew her parents, she is marrying the love of her life Alex Le Domas (Mark O’Brien), estranged son of the wealthy and powerful Le Domas family. For over a century, they have amassed a gaming empire that puts Parker Bros. and Hasbro to shame. But something happened to Alex when he was a child and since then he’s never been able to look at his father Tony (Henry Czerny) or mother Becky (Andie MacDowell) in the eye. He’s even barely able to share more than a handful of kind words with his younger sister Emilie (Melanie Scrofano), spending more time feeling sorry for her than anything else. Only his older brother Daniel (Adam Brody), a chronic drunk with a greedy wife (Elyse Levesque) he openly loathes, can understand and relate to Alex’s disdain for the Le Domas clan, the pair able to silently communicate with one another no matter what else might be happening at any given moment.

Grace doesn’t know what caused this estrangement or understand why everyone seems to be walking on eggshells on her and Alex’s wedding day, she just knows she feels a special kind of euphoria in becoming the wife of a man she adores and gaining an incredibly large, seemingly close-knit family, both on the same day. But even after saying, “I do,” it turns out there is one more thing to be done before the young woman can officially be considered part of the family. At midnight, Grace must play a game, one chosen entirely by chance, almost as if it were selected via magic, and continue playing until the first rays of sunshine trumpet the arrival of a new day.

That game turns out to be “Hide and Seek,” and in the malevolently witty and delightfully gruesome horror-comedy Ready or Not this children’s game is the last thing you ever want to play at the Le Domas mansion. For reasons best left vague, Grace needs to stay alive until dawn while at the same time every member of Alex’s family, as well as their butler Stevens (John Ralston), attempts to kill her. It’s a whole mess of cats up against one very frightened, yet resolutely determined to survive mouse, directors Matt Bettinelli-Olpin and Tyler Gillett (Devil’s Due) and screenwriters Guy Busick and Ryan Murphy delivering a funhouse of thrills, chills and laughs that also just so happens to be one of the best films I’ve seen all summer.

Subverting genre convention whenever and wherever it can, this thriller has a glorious time playing with a variety of different genre tropes as it seductively weaves its way towards its fiendishly bloody conclusion. It’s like a gore-filled Clue melded with You’re Next and then all blended together with healthy dolloping of Agatha Christie, Stephen King and MAD Magazine just for good measure. The film also presents a captivatingly complex heroine with more depth than initially meets the eye, Grace’s resilience coupling nicely with her forceful survival instincts, neither of which diminish her intelligence or emotional complexity whatsoever. She’s instantly likable, and even when forced to do the distasteful I still found it impossible not to root for the young bride for every step of her nightmarish journey.

Weaving, so terrific in Joe Lynch’s sadly underseen gem Mayhem and a magnetic scene-stealer in Amazon’s “Picnic at Hanging Rock” miniseries and during a much-too-brief arc during the first season of “Ash vs Evil Dead,” is spellbinding as Grace. Her playful exuberance and wondrous excitement believably give way to unfathomable shock, haunting disappointment and unrelenting terror with deft gracefulness. The actress makes the character’s innate goodness continually shine through no matter how terrible things become for her. Weaving is electrifying, her three key scenes with an equally spectacular MacDowell bringing this entire story and its various themes into such pristine, eloquently pure focus I was amazed by what the two women were able to achieve.

Even at just over 90 minutes it does take the directors a few moments to kick things into gear. The early exposition foreshadowing Alex’s estrangement from his parents and why the Le Domas family must play this game every time one of their own takes a spouse are moderately clunky, and if not for Czerny’s articulately smarmy delivery it’s likely these moments would have worn my patience perilously thin. Also, while there are plenty of surprises to be found inside Busick and Murphy’s amusing script, I equally cannot say I was at all shocked by much of what happens during their story’s climax. At a certain point it becomes fairly clear there are only so many places this narrative can go, and as such the power of the final act is slightly diminished because of this.

But none of this is deadly to the film itself. The directors orchestrate the action with energetically giddy aplomb, building tension and suspense with an authentically organic intensity that kept me sitting on the edge of my seat. They also allow all of the actors individual moments to shine, and along with the aforementioned Czerny and MacDowell fellow cast members Scrofano, Levesque, Nicky Guadagni (as Alex’s battle axe-wielding Aunt Helene) and Kristian Bruun (as Emilie’s past-his-prime frat boy husband Fitch) all deliver exquisite support. Best of all is Brody. His Daniel is an intriguing enigma who plays things so close to the vest deciphering his motivations isn’t always easy to do, the way in which the actor layers his performance with a mixture of sarcasm, depression, brotherly affection and seething disdain wondrous.

I want to say so much more about the plot mechanics being utilized by the filmmakers but I’m going to refrain from doing so. What I will add is that the technical elements are sensational, Andrew M. Stearn’s (“The Handmaid’s Tale”) production design, Avery Plewes’ (Everything, Everything) costumes, Terel Gibson’s (Sorry to Bother You) editing, Brett Jutkiewicz’s (Wanderland) cinematography and especially Brian Tyler’s (Escape Room) score all sublime. But it is the emphasis on the characters, their individual development and how they deal with the murderous situation they find themselves forced to endure that helps make Ready or Not essential. This is a masterfully entertaining game of subterfuge, innuendo, romance and survival where the ultimate winners are the viewers who bought themselves a ticket to see it get played. 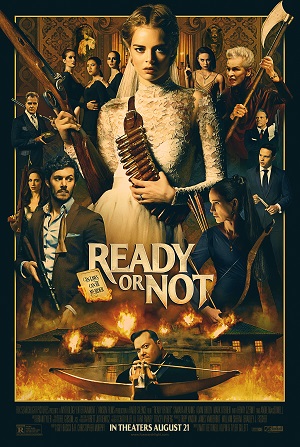