Right around the third grade I walked into my elementary school library and discovered Alvin Schwartz’s Scary Stories to Tell in the Dark sitting tucked back into a dusty corner on one of the shelves. It was almost like it wasn’t supposed to be there, like the librarian had misfiled it on purpose so that none of the students would discover where it was hiding. Immediately intrigued by artist Stephen Gammell’s cover illustration, I serendipitously slunk down at a desk at the far end of the library, cracked the cover and began reading the first tale and was immediately hooked. It was like I’d discovered something I was never supposed to find let alone be allowed to read, and I’ll never forget the crooked grin on our librarian’s face as she told me to enjoy and, just before I exited through the door, whispered that she hoped my nightmares wouldn’t be too terrifying that night when I went to bed.

Needless to say, I love all three of Schwartz’s classic anthologies, each one a treasure trove of the macabre that’s absolutely perfect for adolescent readers looking to have a cold shiver sent down their spine and an uncomforting giggle stuck at the back of their throat as they finish reading one of the stories. A mixture of folklore, old wives tales, humanistic fables and classic campfire tales, each book in the series holds a special place near the center of my heart, and I can’t imagine what my life would have been like had I not had the good fortune to run across one of them just a few short days before my birthday that bleakly cold February day.

So it was with great trepidation I wandered into my promo screening of director André Øvredal’s and producer Guillermo del Toro’s PG-13 cinematic interpretation of Schwartz’s source material. While the former was the mind behind imaginative and suitably unsettling efforts like Trollhunter and The Autopsy of Jane Doe, and while the latter needs no introduction what with being the mastermind behind all-timers like Pan’s Labyrinth and The Devil’s Backbone (not to mention just winning a Best Picture Oscar for unlikely awards darling The Shape of Water which featured the love affair between a deaf cleaning woman and a humanoid sea creature), I still was a little apprehensive to give this one a look. These tales needed to be aggressive, nasty and bloodthirsty, yet they still also had to be depicted in a way that would make them suitable viewing for the book trilogy’s target adolescent audience. As balancing acts go, this was going to be pretty tough, and even with Øvredal and del Toro’s combined talents I wasn’t altogether certain they’d be able to pull this one off.

I shouldn’t have been worried. While the central narrative can be a little lumpy at times, overall Øvredal, del Toro and the rest of their creative team deliver Scary Stories to Tell in the Dark to the screen with splendid, unrelentingly ghoulish gleefulness. They bring Schwartz’s tales to life with enthusiastic gusto and do it by relying on Gammell’s original images to give them the visual outline for their film’s set direction and production design. They treat their target audience of youngsters with absolute respect while also keeping things suspenseful, tense and intelligent so they never lose the attention of older viewers, either. Far better than either Goosebumps entry, more cutthroat and insidiously chilling than the otherwise also excellent The House with the Clock in Its Walls from director Eli Roth, I loved this movie something fierce, and if 12-year-old me had watched it I can almost guarantee I’d have gone back to the theatre multiple times just so I could experience its various thrills and chills again and again.

The central story here is set in small town America circa 1968. Change is in the air. The Vietnam War is beginning to rage. Protests are brewing across the country. But for teenager Stella Nicholls (Zoe Margaret Colletti) and best friends (and social outcasts) Auggie Hilderbrandt (Gabriel Rush) and Chuck Steinberg (Austin Zajur), it is a normal Halloween night and they want to make it one they’ll all remember for the rest of their lives. After a peculiar series of events leads them to hide in drifter Ramón Morales’ (Michael Garza) car while he sits watching a horror double-bill at the local drive-in, Stella has the grand idea that they should all go visit a haunted house. She leads the group to the boarded-up former home of the Bellows family and the supposedly wicked Sarah, who rumor has it was locked into a basement room where she told scary stories through the wall to curious children eager to be scared, many of whom as legend would have it were never seen or heard from again.

This is more than a local legend, of course, and after Stella ends up getting her hands on Sarah Bellows’ hand-written book of stories it is only a matter of time before all of their group (along with two other youngsters who stumbled into the house as well) are being stalked by various creatures and demonic forces. This is the launching point or Øvredal and del Toro to dive head-first into many of Schwartz’s most fondly remembered tales, including the one about the unfortunate youngster with a spider bite on her cheek as well as another about a corpse searching for its missing toe that somehow managed to find its way into a hearty stew pot. Each of these is cleverly and organically inserted into the narrative, the filmmakers never stepping back from just how gruesomely ominous and deathly tragic the majority of these yarns end up proving to be.

Is it all a little on the obvious side of the equation? Certainly it is, and even had I not been as familiar with Schwartz’s books I still doubt I’d have been surprised by anything that was happening to Stella and her friends. I also wasn’t entirely fond of how many of the adult characters were crafted, the majority of them either kept entirely in the background as stock genre caricatures, presented as unctuous nincompoops are completely forgotten about altogether whenever the movie decided it no longer had a need for them. This ends up being especially problematic where it comes to the town’s Sheriff (Gil Bellows, who does what he can with the role) and Stella’s factory worker single father Roy (Dean Norris), neither man fleshed out enough to make what happens with either of them resonate near as much as had hoped was going to be the case.

No matter. Øvredal is a master of atmosphere, and his usage of practical makeup effects and lighting techniques, most notably when coupled with his and cinematographer Roman Osin’s (Labyrinth of Lies) visual compositions, is nothing less than magnificent. He also gets strong, suitably complex performances from his young cast, Colletti delivering a robust, multifaceted turn as Stella I was noticeably drawn to. I liked what she was doing here and could relate to so many of the emotions she was depicting with such apparent ease. Colletti’s chemistry with Garza is noteworthy, the actress making their growing friendship and reliance upon one another feel authentically pure throughout the motion picture, especially as events built towards ethereal, time-bending supernatural climax.

I have no idea if Scary Stories to Tell in the Dark will hit general audiences the same way it did me. Once it became clear that Øvredal and del Toro were going to stay true to Schwartz’s source material and that they would rely so heavily on Gammell’s illustrations for their visuals cues there was no way at all I wasn’t going to enjoy what the two were doing here. Even with that being the case, I still say the pair’s movie is a glorious yarn of horror and suspense perfect for both fans of the books and clueless newcomers to this material alike. It got under my skin, the mark it’s left upon me one I’m going to enjoy ruminating on for quite some time to come. 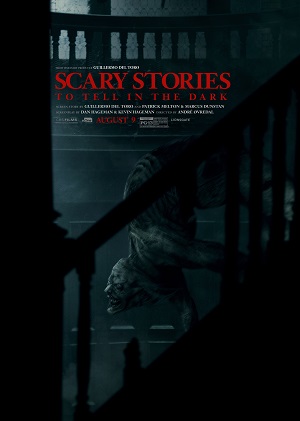